Who is the Killer from the following suspect in this image? [closed]

Ask Question
Asked 5 months ago
Active 5 months ago
Viewed 418 times
-8
$\begingroup$
Closed. This question is off-topic. It is not currently accepting answers. 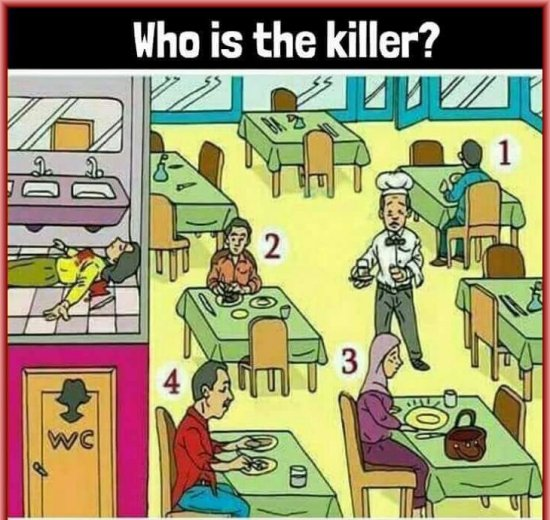 I did a lot of image search on google and found out the original source of the image is http://www.ghadahaleidi.com/

because there is a lot of debate I posted the answer myself and here are the different sources of the answer. These article with answers have an oldest posted date, the articles with answer deep suggests are part of brain puzzle category and someone did it just for a prank (the article of gpuzzle do not have a post date) they are hiding the post date of article
Answer spoiler alert ( don't look)

ladiespassiton.com
truthinsideofyou.org
The answer is 4 because of the scratch on his neck, the knife is missing and torn piece of his shirt is near the victim. You are assuming the red thing near the women is blood but it is not blood but the torn piece of the killer shirt which is also missing from the killer end if you see carefully.

As you can see in the image there is a woman on the left who got killed by one of the following suspect tags by number 1,2,3,4 you can see them on the right side of the image. justify your answer with proper statement will be accepted.

Hint 1: a waiter is bringing a glass of water but 3 & 4 is already having one.
Hint 2: Everyone is having at least 2 chairs with the table but only suspect 4 is having 1 chair?
Hint 4: 3 & 4 can be watched easily by 2 and nobody is watching 1 & 2.
Hint 5: the chair behind 2 seems like someone recently moved from there.
Hint 6: suspect 4 is not having a knife with him and his shirt tucked out but there is more.
Hint7: why there is no purse with the women who died?
Hint8: There is no table with extra food that means the women just came in and went to the washroom to wash her hands.
Hint9: Suspect 2 is having the best view he can watch everyone from that point. the chair behind him seems misplaced.
Hint10: it seems like there is a scratch on the neck of suspect 4
Hint11: we don't know anything about suspect 1 he is sitting idle not ordered any food yet. we can't see his table also nobody is watching on him.
Hint12: apart from suspects waiter can move freely from one place to another he can get a knife from any table easily. He can also access ladies washroom quietly we don't know where the door is for washroom

I think it's probably

For a few reasons

1. He seems to be missing his knife (the murder weapon)
2. He's wearing a red shirt (which would cover any suspicious blood spatter).
3. His appearance is dishevelled (shirt untucked in several places) indicating that he may recently have been involved in a struggle.
4. In cases of homicide, the perpetrator is male 96% of the time.

Unfortunately this is an old puzzle from Gpuzzles

@hexomino already answered the question but I will explain to you what happened... it is riddle of picture, visual riddle so you need to use visual clues and IQ to solve it and not stories. whatever I am mentioning is based on visual clues in the picture.

Suspect 3 seems clear: obviously first doubt will go on the lady she is the only lady in the restaurant and it is easier to think by every one that she is the murderer.

1. if she has done the murder why she is still sitting there? she got the scarf she should try to leave while covering her face. if she covers her whole face nobody will doubt her because she is a Muslim woman.
2. it is difficult for women to stab another woman from the front even in the washroom without any noise. she needs to keep cover her mouth with one hand whole time until she dies. this cannot be done by women...
3. The girl hasn't ordered yet because she is waiting for her friend. As you can see everyone is having food on their table but the waiter is busy in serving suspect 3, the waiter is bringing a glass of water for the women (suspect 3) because of she just came-in to have food along with the women who died. the stuff on the table of suspect 3 is of women who died, she left her purse, the empty glass of water on the table and went to the washroom to wash her hands. that means they both are friends.

Seems to be clear: suspect 1 seems to be the most suspicious person, we can't see anything on his table. but what makes him clear is his sitting position. if he wants to go inside women washroom and kill the women then he needs the best seat to keep an eye on the others to easily move in and move out from women washroom. And it seems to be like the women is along with suspect 3 that is the long-distance to keep an eye like that.

Suspect 4: The fourth person i.e. the man in a redshirt.

1. He is sitting near the toilet so its easier for him to murder and then quickly come back to his seat.
2. His red shirt is also a good cover for any blood spill that may occur due to murder.
3. His shirt is also tucked out which shows he was in a hurry.
4. it seems like a torn piece of his shirt is under the victim
5. He is pretending to use a knife... most activities with a knife require both hands except the murder.
6. Mostly women washroom and men washroom are next to each other because they both need water supply and flushing system. so with small chance by keeping eyes #2 and waiter he can easily go in and come out.
7. he is having a scratch on his neck...

seems to be clear
1) he is having a knife, busy in eating. there is nothing suspicious about him.

Not the answer you're looking for? Browse other questions tagged visual lateral-thinking story or ask your own question.

15
The Sinister Killer
5
Find the secret phrase in this encrypted image (Part 4)
12
Dedicated image - but dedicated to what/who?
21
Detectives vs Nelson: The Chessboard Serial Killer
7
Help me find my friend Bill
11
Who poisoned the grandmaster?
6
Who killed Professor Thomas Eyebright, and why?
25
Where will this killer strike next?