Ernie and the Island of Stability

Unfortunately, it appears that I may have misled you a little in this puzzle (as you probably know - my memory of events isn't always perfect). When I was writing it, I re-checked the Kzijekistanian postal rules on Gurgle-translate, but somehow stumbled on an old cached web-page with out of date data. Notes 1, 2, and 3, were unchanged but Note 4 was misleading. As a result, it appeared that even with the best packing, the pinot noir would have had to be so execrable that the wine store would have paid Ernie to take it away!!! I have edited the story below to show the correct postal rules for four or more items (and have retained the old note in strikeout form for posterity). J Richard Snape did all the hard work for the first part of the puzzle - which was meant to be the hard part - so I am accepting his answer as correct.

"Are you familiar with the Island of Stability?", Ernie asked, as we sat drinking coffee and perusing some light literature at the local cafe. I had to admit that I wasn't, and so Ernie took it as an opportunity to reduce my ignorance. He read the following from his magazine Nuclear Analysis Monthly "In nuclear physics, the island of stability is a set of predicted, but as-yet undiscovered, heavier isotopes of trans-uranic elements which are theorized to be much more stable than some of those closer in atomic number to uranium." and pointed at a diagram showing the predicted island. "The current belief is that the right isotophe of Flerovium may have a half life measuring in millions of years!", he continued emphatically.

I murmured a note of vague interest and returned my attention to my much more interesting reading - The Journal of Trans-Chatcal Affairs. I read on for a while and then felt a mild note of deja-vu. "What was that element you were talking about before?", I asked. "Flerovium", Ernie replied, "But chances are there is no really stable isotophe or it would have been synthesised by now, if only in picogramme quantities". I paused to savour the moment - it wasn't often that I was in the position to tell him something that he didn't know. "So I guess you wouldn't give much credence to this report", I replied, and read out a short section of the article I was reading. It has been reported by the People's Council of Mining and Metallurgy, in the break-away republic of Kzijekistan, that a large quantity of elementally pure Flerovium-298 has been found in a prehistoric meteoric impact crater - situated in a remote region south-west of the Kyshtut river. The Fleovium occurs in crystalline form as perfect regular tetrahedrons - all exactly identical in size. As the republic has no suitable research facilities of their own, in the spirit of international brotherhood, they are offering uncut crystals, charging only for extraction costs and postage, to researchers around the globe.

"And the article references a web-site where they claim you can order the stuff", I said. Our first thoughts were that this must be an internet scam of some sort, but Ernie ran a quick search and found several academic pre-prints already showing preliminary data from their Fleovium samples. Ernie entered the link into his tablet. The site was written in Kzijekistanese, but Gurgle-translate dealt with that and soon we were reading the following:

Fleovium crystals are all precisely 5.29 cm along each edge. Any number may be purchased at extraction price (plus postage) which can be calculated using the following algorithm:

Gurgle-translate seemed to have problems converting the density to standard Arabic numerals but Ernie said he was familiar with Kzijekistanian digits, so he would calculate the extraction price if I was willing to deal with postage. I loaded the post office site onto my tablet to find:

The Kzijekistan Postal Department charges all post by standardized volume, not weight. The postal charge is calculated by the following algorithm:

Calculating the optimal packing of a tetrahedron into a cube wasn't too hard, but I made a couple of small models from folded paper to confirm I had got it right. Nonetheless, when I told Ernie the post charge, he was very unhappy. "But that is more than the extraction cost!", he exclaimed, "I have no interest in subsidizing the profit of the Kzijekistan Postal Department". "Well, I could always use two crystals, maybe we can pack them more efficiently", Ernie muttered. I scrolled further down the KPD's web page and read the following:

Once again, I calculated the post cost (I needed to make a second tetrahedron model, and it took a little longer to find the optimal packing), but Ernie was still disappointed: "The post cost is still higher than the materials cost. How about if I buy three?". There was another note further down the page:

It took a lot of work to confirm the best packing this time. By the time I was finished the table was littered with little model tetrahedra and boxes. I decided Ernie had chosen the much simpler task. "Well, at least this time the postal charge is less than the extraction cost", I said when Ernie told me his number. "True", he replied, but now the total cost is 10c more than what I have in my PayPall account! How about if I buy four of them?". This seemed like a fools errand to me - if three were too expensive what cope could there be in buying four crystals? There was a final note on the KPD site:

Note 4: The standard volume for four or more items is that of the smallest hexahedron constructed from six quadrilateral faces into which all the items can be packed simultaneously.

I sighed and reached for the scissors to build another tetrahedron. It could take all afternoon to work out how the most efficient packing, but then Ernie gave a chuckle and told me he had already worked out the postal cost and it was much improved. "I can afford four crystals and still have money left over!", he exclaimed. He was so pleased that after he had filled out the online purchase form, he spent all the money left in his account on a nice bottle of Pinot Noir.

Here is the point where you may be able to help me. I believe there is sufficient information to work out the density of Fleovium crystals (and the error limit in that value). Also, as it is my turn to buy the wine next week it would be good to know approximately how much Ernie spent on the celebratory wine.

Well, here are some thoughts - they rely a bit on the hints and a maths result that I can't quite show for myself for the very last bit. Don't know whether it's right, but it seems to work out...

I realised that the floored volume of the crystals themselves (as needed for the material calculation) will go up as 17, 34 and then 52 (not 51!).

You then work out the rounded packed volume by realising that the smallest cube you need is the one with the tetrahedron side as a diagonal on the cube face, so you get a cube of side x == 3.74059.... so the volume is 52.338590.... or rounded off to 52 and then working out the progression to 2 and 3 tetrahedra.

You then set up the inequalities of material cost (left) vs postage cost (right) as follows:

For all three to be true, d must lie in the range

Thus, if we go conservative on the density, let's say he has in his Paypal:

Next, we must work out the cost for the 4 crystals. We already have an estimate for d - so we can work out the material cost (taking the same lower bound on density as we did for the Paypal amount):

Now - we know how much he has left at most for paying for postage - to give us a clue on the search space for the volume:

So, all that remains is to work out what the optimal hexahedron is to contain the 4 tetrahedral crystals.

Thus costing us in total

For wine. Looks like he could just about manage a Pinot noir :)

Well, I've been thinking about this a little more and built a model. I think there is a hexahedron that might get a slightly better volume than the one above, but I haven't been able to calculate that volume as yet. Perhaps the OP will give us some clues as to whether this angle (excuse the pun) is the right one... I built a model, in the hidden picture below, along with some translucent shapes overlaid of what I think the overlaid hexahedron might look like (ish)...

I'm somewhat doubtful, as I don't think even Ernie could calculate the volume of this shape without pen and paper...

My proposed arrangement of tetrahedra: 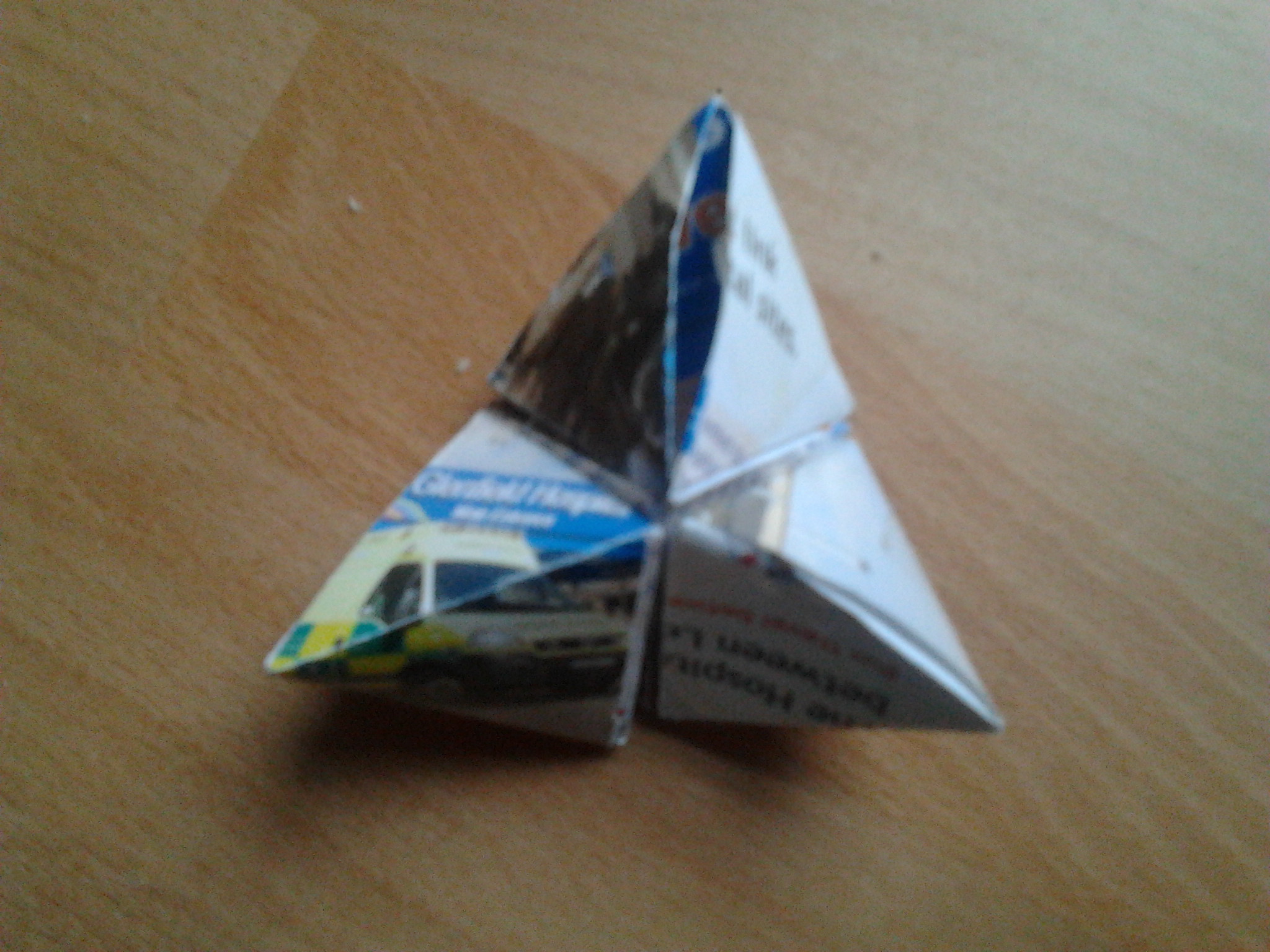 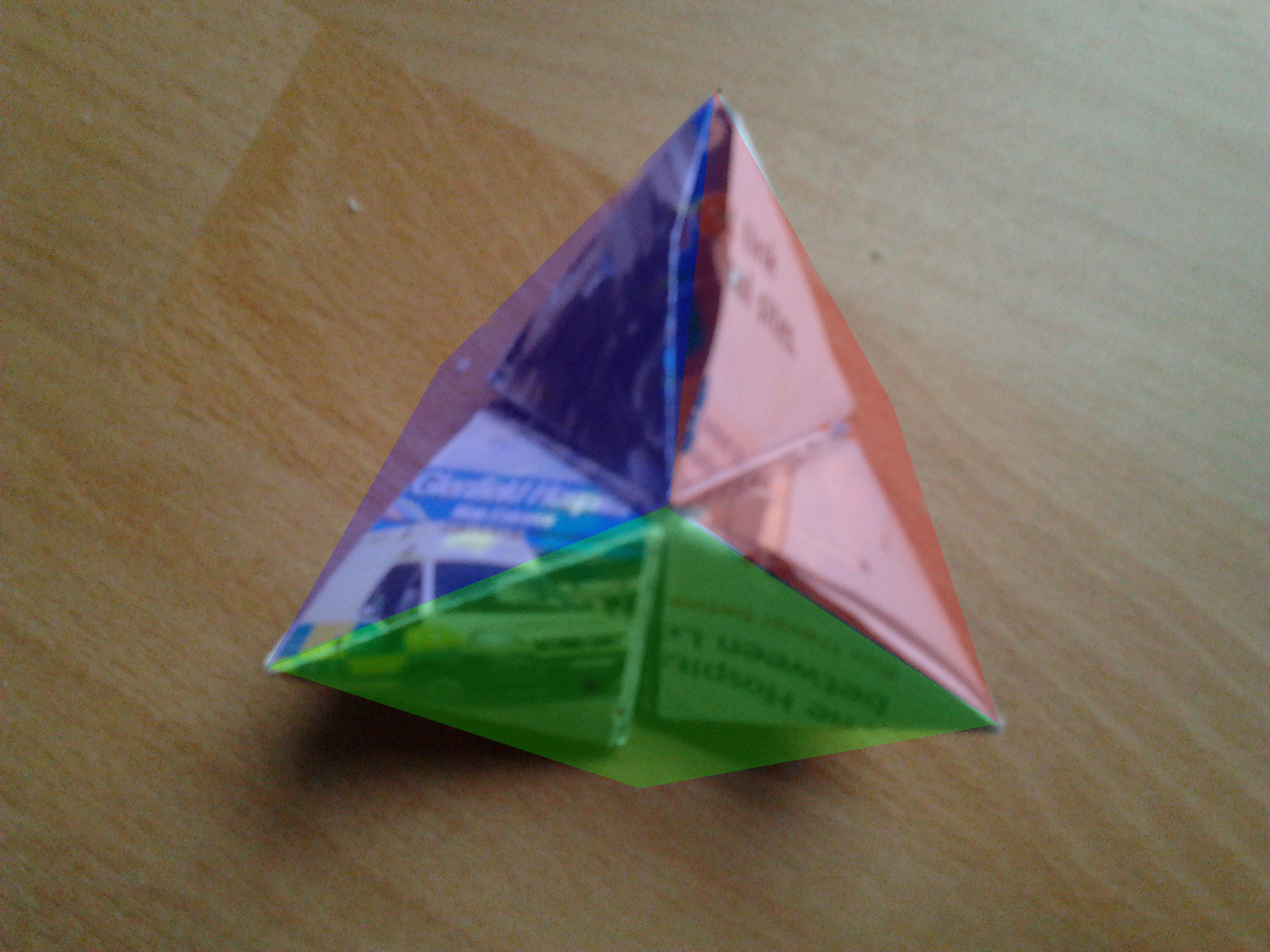 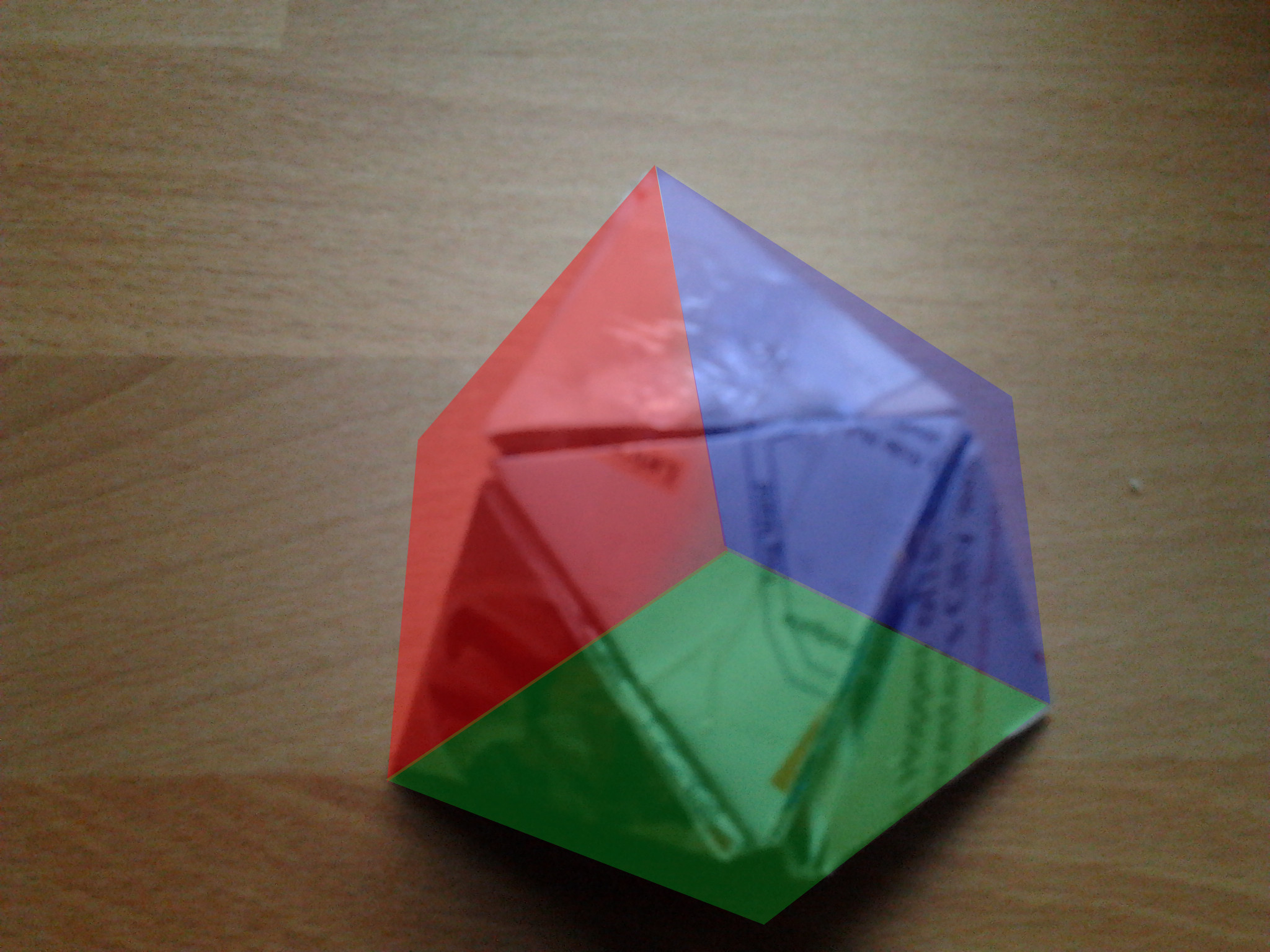 Note the faces that look like parallelograms here are not coplanar, so I don't think the volume calculation is simple...

11
Ernie and the Thrones of the Aqua-ant