I'm looking for solution & plausible explanantion which letter comes next in following riddle: 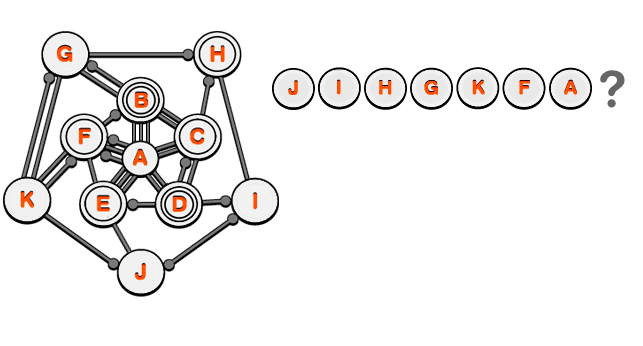 Update: The correct answer is B. Does anybody know a plausible argument?

The answer is B

The secret is Fibonacci series. The edges that connect the letter nodes are either blob ended or flat ended.

The node 'H' has 2 concentric circles around it.

The node that satisfies 21 is 'B'. This is because node 'B' has 3 concentric circles around it and 7 flat ended edges. If we multiply them we get 21. Voila!

My answer is E

j, I, K = there is a single line both sides. line between k and j is having a circle in the end toward j side and between j and I, there is a circle at the pointer end, and I side both. so the next letter came up is I. it means away circle is having higher priority.

I, D, H, J = there are all 3 single lines and away circle is only j side that means and next letter coming is not j that means the letter will not repeat. now between H and D, it moves towards H because there is a circle between d & I towards pointer side on line and there is no circle between I and H. that means no circle letter have high priority than the line where circle is cursor end. also, letter will not repeat

the pointer moves towards K,

it is clear with a line theory that priority is equal but K comes after B in alphabetical order so pointer moves towards K.

Now pointer moves towards A because

1) no alphabet will repeat. (first check)
2) the more the number of lines the higher the priority.( second check)
3) the line with circle away from the pointer is having the highest priority, as compared to the line with no circle is higher than the line where circle is toward pointer end. (3rd check)
4) if line priorities are equal we go with alphabet order priority. the letter comes later in alphabetical order is having higher priority. (4th check)

B. Because this is the only option that allows the path to be a Hamiltonian cycle.