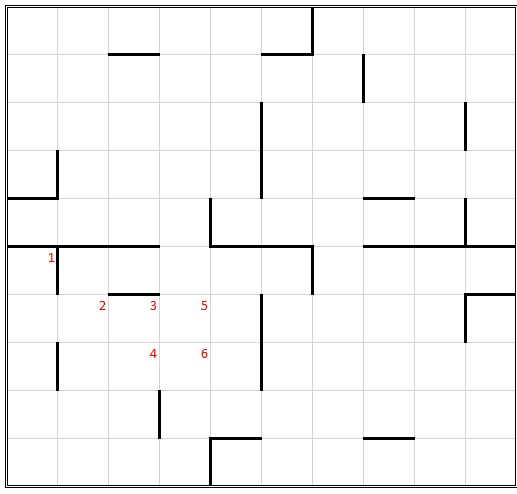 This is a cryptic crossword jigsaw fill: the clues are listed below, grouped by length (the only clues to have length in the standard parentheses are those having two words) and in alphabetical order in each group. When they are solved they can be arranged to fit in the grid in exactly one way.

Once the grid is filled, the numbered squares will spell out, in order, the expected (though fictional) feminine noun for a member of a famous group. Solvers should correct the spelling (change exactly one letter) to be the name of the group (this will produce real words in the grid, though arguably one of them is oxymoronic). Solvers should also highlight three surnames in the grid, of members of the group, and indicate which single letter should be changed elsewhere in the grid to find a fourth surname (sadly this change does not create real words). 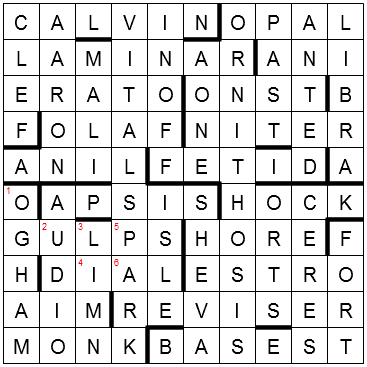 the OULIPO, a group of French experimental writers. The feminine noun is OULIPA. Correcting the latter to the former turns DIAL into DIOL and SPARK into SPORK (I'm not sure whether the intended oxymoron is SPORK itself -- spoon+fork -- or VITAL SPORK, since a spork is hardly vital).

Its members in the grid are

CALVINO, along the top; PASTIOR, down from the P near the end of the top row; MONK, at the bottom left. The one that needs changing is AUDIN, obtained by changing O to N in AUDIO near the bottom left. (Which unfortunately kills Mr Monk, too.) Alternatively, you could change the L at the end of DIAL/DIOL into an N to get BENS reading upward. (The resulting entry could be Celine Dion, perfectly reasonable even if not exactly a word.) But I suspect the composer's intention is BRAFFORT, obtained by changing a K to an F on the right-hand side. 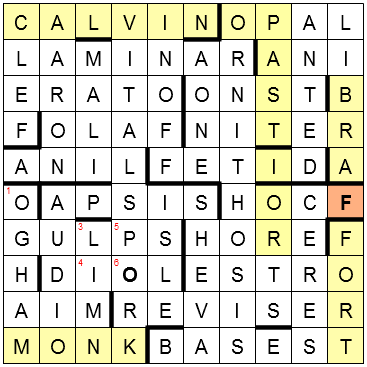 Dye a duck
Half a square metre of paper is perfect! (1-3)
Schematic's second page missing a key...
...tone, for example, laid out
Last two thirds of push for small defense
No second impact to back of knee
Edmund's white with age and Henry's rather less masculine
My intention broadcast by Man, for example
Once illuminate starting letters in manuscript notes
Indian gardener -- bad one
Friar's opposite is mostly Capuchin
State occupied with Frozen Snowman
Dialect once supported by saint
No mate for milky white gemstone?
Local leftovers rot badly, son
After seconds of spiced cake, essay Stilton

AARON (AA+RON)
ANTED (past tense of ANTE; (w)ANTED)
APSIS (initial segment of those words at start of clue)
AUDIO (AUDI+O)
CERES (double definition)
ERATO (ERA+T+O)
ESTRO (not sure about this; ESTRO(gen), LA implying American so e... rather than oe...? ESTRO means "inspiration" in Italian)
FETID ((ree)F+TIDE*)
GULPS (LUG< + PS)
IN-OFF (substring of fagINOFFers)
LIBRA ((ca)LIBRA(te))
NITER (TIN< + E + R -- thanks to @postmortes for correcting my first attempt at explaining this one, which wasn't what they'd intended and made less sense)
OGHAM (substring of vangOGHAMemoir)
SHEVA (SHE + V(aness)A)