This is a Heyacrazy puzzle.

For an example puzzle and its solution, see this question. 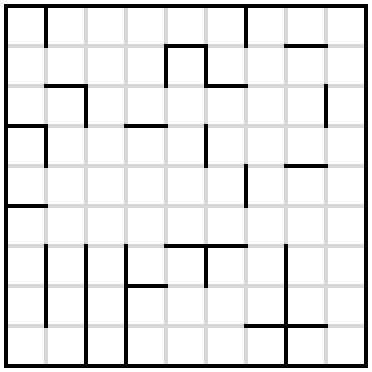 This happens to be the first Heyacrazy I wrote, to see if the genre was viable. Diagonal borders hadn't been added yet, but there are still a lot of interesting deductions - this puzzle is an attempt to show off several of the ones that would appear often.

Whenever we have one of those | patterns, at least one of the two cells it involves must be shaded. (Otherwise both of the ones on the other side have to be, and that won't do.) We'll use this a few times later. Obviously two diagonally-opposite cells of the + near the bottom right have to be shaded, and it's easy to see that whichever way around they go the two adjacent cells on the bottom are unshaded. Now, let's turn to the bottom left. Suppose the third cell in on the diagonal is shaded. Then its neighbours are unshaded, which gives us another shaded cell because of the T-shape, and now whether or not we shade the third cell on the bottom row the cell northwest of _that_one needs to be unshaded; that requires the cell to its left to be shaded and some other adjacent ones unshaded, giving the following configuration 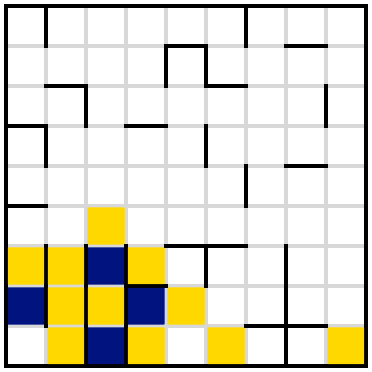 which is impossible because we have a forbidden line. So that diagonal cell must be unshaded after all. Now, suppose the one southeast of it is shaded. Then the third row gives us two more necessarily-shaded cells, and once again an illegal configuration: 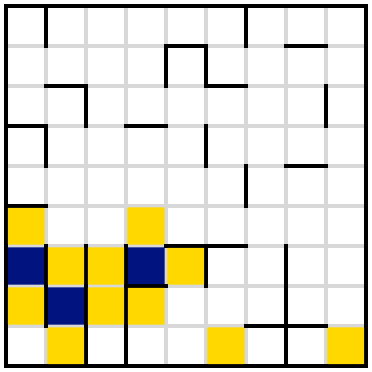 Suppose the cell to the right of the one we just unshaded is also unshaded. That requires the first and fourth cells in its row to be shaded, and we quickly get to the following impossible configuration: 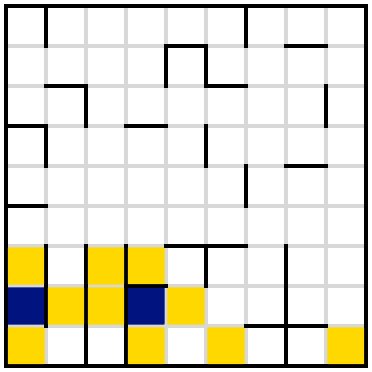 So that cell is shaded, and now we can use a couple of T-shapes to infer the following. 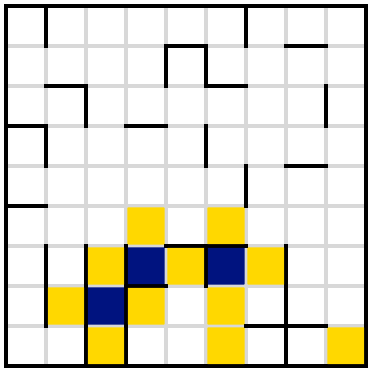 Obviously either cell 2 or cell 4 of the bottom row is shaded. If we pick cell 4, we quickly get this impossible situation: 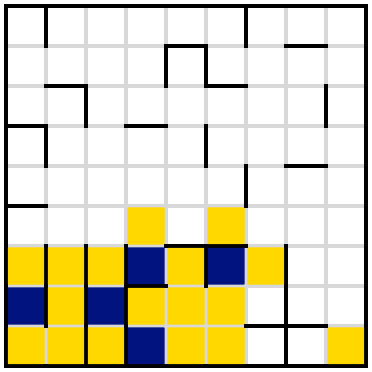 so it must be cell 2, which rapidly leads us here: 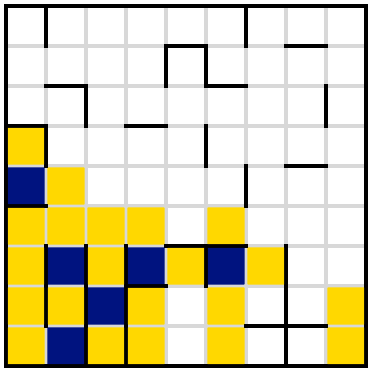 where I've also filled in another easy unshaded cell at the bottom right. That unshaded cell four down in the leftmost column implies that at least one of the cells to its north and easy is shaded, so the cell to its northeast is unshaded, and we can repeat the same logic to unshade the cell northeast of that. Now, look in the middle at the bottom. The two undecided cells in the middle of the second and fourth rows up can't both be unshaded, so the unshaded region here must "escape" rightward, which tells us which way around that + goes -- at which point we can also tell that it's the lower of the two cells I mentioned a moment ago that must be shaded. We're here: 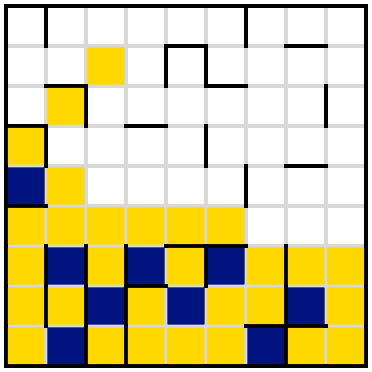 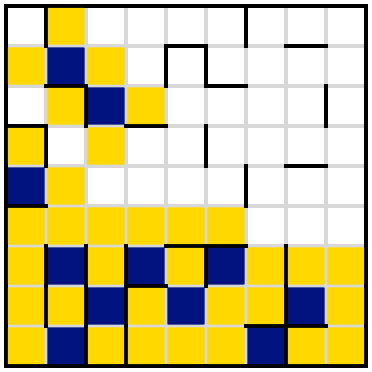 We must, again, have either the S or W cell, which means that some stuff at the NW needs to "escape" along the top edge, requiring the first and third cells on that edge to be unshaded. This finally tells us that it's the W cell (i.e., row 3, column 1) that was shaded. Following a few more easy implications we get this: 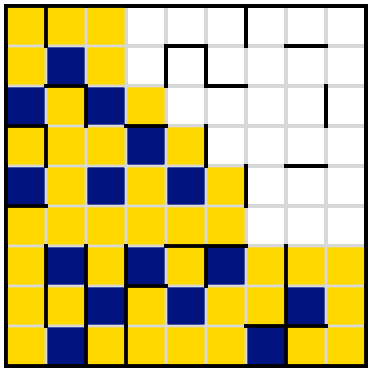 The cells N and E of the unshaded cell just right of centre can't both be unshaded, so the cell NE of that; we must then shade the cell S of that one, which in turn gives us another shaded cell NW of that. Here's the state of play now: 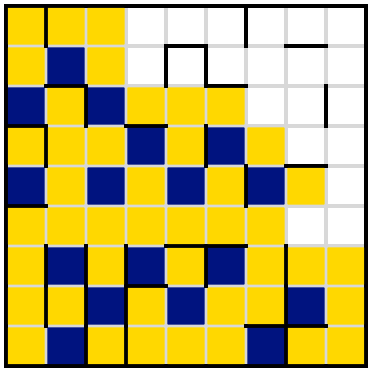 Either the cell above, or the cell below, the rightmost known-unshaded cell on the middle row must be shaded, which means that the rightmost cell of the middle row is also unshaded. At this point I don't see any easy way forward, so let's try something out and see where it goes. Either cell 5 or cell 6 of the second row must be shaded. I expect it will be cell 5, so let's try shading cell 6. That leads fairly quickly to this: 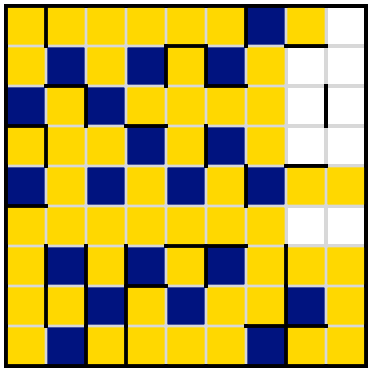 which is impossible because of a roughly-horizontal line near the top. So, indeed, cell 5 was shaded: 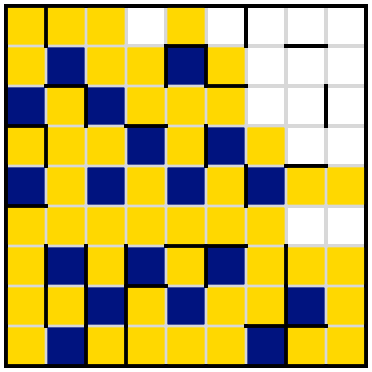 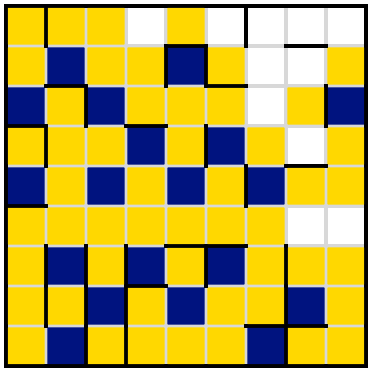 giving us a couple more easy ones: 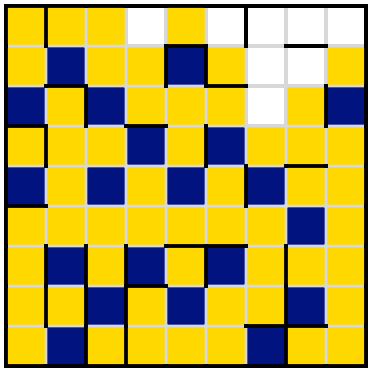 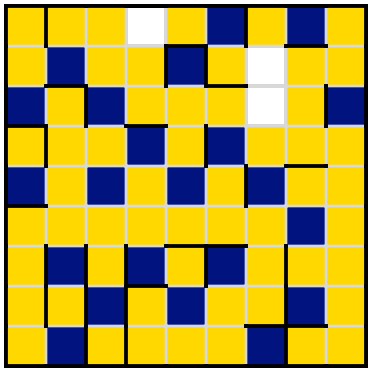 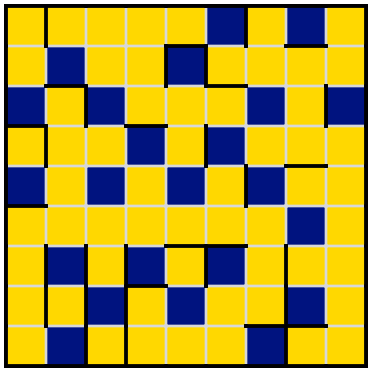 Gareth has already given an answer, but the intended way to break into the puzzle is much less circuitous:

An important fact about Heyacrazy puzzles in general: an open wall (one that is unshaded on both sides) can never see two adjacent segments of a wall. This is because it would force both cells on the opposite side of the wall to be shaded, but those two cells are adjacent.

So, consider the walls marked in blue here. 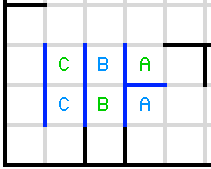 One of the cells marked "A" must be shaded, because otherwise the horizontal line would be an open wall that sees the 2-tall wall immediately to its left (and force both Bs to be shaded).

So one of the cells marked "B" is unshaded, and so is the A of the same color (since both are next to the shaded A). If the other B was unshaded, then there would be an open wall that sees the 2-tall wall to the left of the Bs: 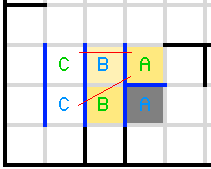 And therefore one of the Bs is shaded too.

The exact same logic applies for the Cs: one C and B of the same color are unshaded, and so the other C must be shaded to prevent an open wall from seeing a 2-long wall. 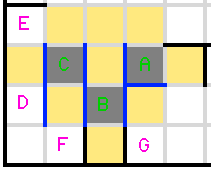 Then D and E are unshaded (to allow the bottom corner to reach the outside), then F is shaded, then G is unshaded, and you're halfway through Gareth's answer without needing to use any extensive case-bashing.