Sliding-block chess puzzles have gone a little cold, so here be a hearty warm-up! ;D

In the below position that I created, it Black to move, but there is a twist: the stipulation is that it is a series-mover-helpmate. 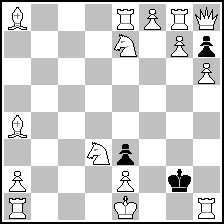 UPDATE: I finally got the postion fixed. The f8 pawn doesn’t attack anything, but it is protected.

You may not know what that is, so here's a brief summary.

A series-mover is a type of chess problem in which one side, in this case it's Black, makes moves by themselves, and the other side will never make a move, except on the very last move in some problems such as this one. However, you must know that the moving side may never be in check or put the other side in check, except on the very last. They can be in check in the initial position, however

A helpmate is problem is a problems where both sides work together to checkmate a side. In this scenario, Black shall conduct a series of moves that will lead to a position where White is capable of mating Black in one move.

What must Black do to help White checkmate Black, and how many moves will that take?

I assume the Pf8 is just a unit that cannot move.

There are many, many solutions, one of which takes

I suspect that what you are trying to achieve is

But anyway there are many flaws and duals along the way.

Black must promote to knight, not queen nor rook, to avoid checking the white king.

I think the goal is to

I suspect the answer hinges on

the pawn at f8, which is illegally placed. I.e. when a pawn reaches the last row it must be promoted to something other than a pawn. Given that you include "helpmate" as part of this puzzle, I suspect white promotes this pawn to a knight.

finishes the job by either a king side castle or just Rf1.

Not the answer you're looking for? Browse other questions tagged chess sliding-blocks or ask your own question.