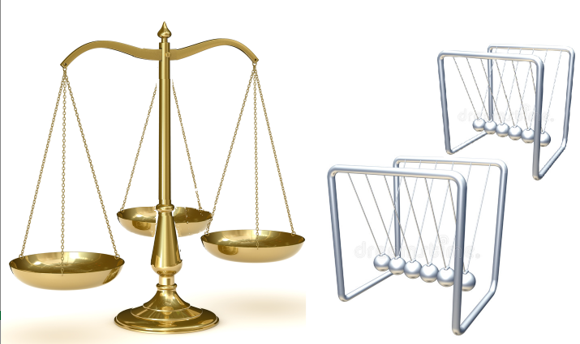 The tripan balance is used for comparing different weights. For example, when the pans carries 7 balls,5 balls and one is empty. The heaviest tilt to lowest level while the empty pan is at the highest level. In case of the same number of balls on two pans, both pans tilts to same level.

Twelve solid balls looks identical but two of them is either lighter or heavier (say 1% different to normal balls). Trying the tripan balance, how much checkings will it takes to find out the odd balls?

It's easy to do in 3 weighings. Just put 4 balls on each plate to start. If all three plates are at different heights, then you know the top plate has the light ball and the bottom plate has the heavy ball. Take the 4 in the top plate and put 3 of them individually into a plate. If one plate is light, there is the light ball. If not, it's the one you left out. Do the same for the heavy ball, and you're done in 3 weighings (4x4x4, 1x1x1, 1x1x1).

the plates will be at the same height after the first weighing. This means that the heavy and light ball are together. Note which group each ball was in (mark them with 3 colors, for example), and rearrange them into 4 groups of 3, with each new group containing one ball from each of the original groups. Now put 3 of the new groups on plates. We know that the light and heavy ball are split up, so the plates cannot be at the same height. If one plate is light, then the light ball is there and the heavy ball is on the table. If one plate is heavy, then the heavy ball is there and the light ball is on the table. If the plates are all different heights, then you know where the light and heavy ball are.

we now know which group of 3 has the light ball, and which has the heavy ball. Pick one of those groups (say the heavy group) and put each of its balls on a plate. This will give you the heavy one, but also the light one - it's just the ball in the light group that has the same marking as the heavy ball. 3 weighings total (4x4x4, 3x3x3, 1x1x1).