Inspired by the "Treasure Hunter Monolith" minigame from Danganronpa V3

Block - a single die on the grid.

Value - the position of a block in the cycle.

Move - the elimination of a group from the grid, causing all adjacent blocks to increase in value.

In this puzzle you will be presented with a grid of blocks. Your goal is to eliminate all blocks so that no block remains on the grid - in the fewest moves possible. For each move you get to pick a group that is currently on the grid and eliminate it. All blocks that are currently adjacent to the eliminated group will then increase in value. The values loop so a block with the highest value will change into the lowest value block. A block with a cross is immune to changing value however all other rules still apply (i.e. can still be eliminated and can exist in a group). Clues for the solution will be given in the puzzle, your answer must satisfy those clues.

These examples will use this cycle:

The groups available in this example grid have been highlighted 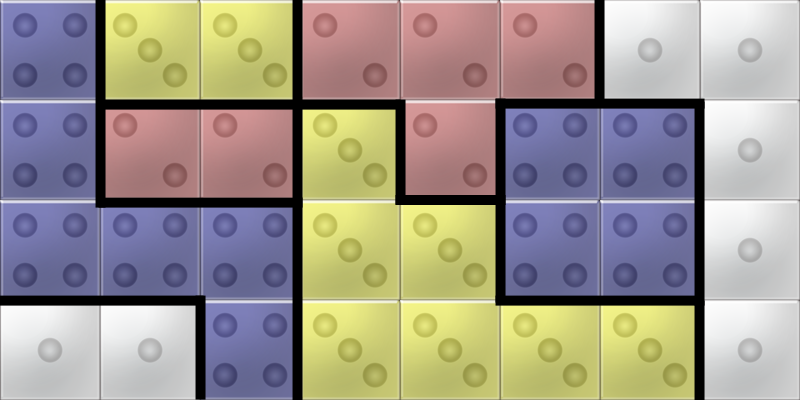 Here is an example of elimination! The highlighted group in the left grid is eliminated and the grid transforms into the grid on the right

The cycle for this puzzle is:

Eliminate all blocks from this grid 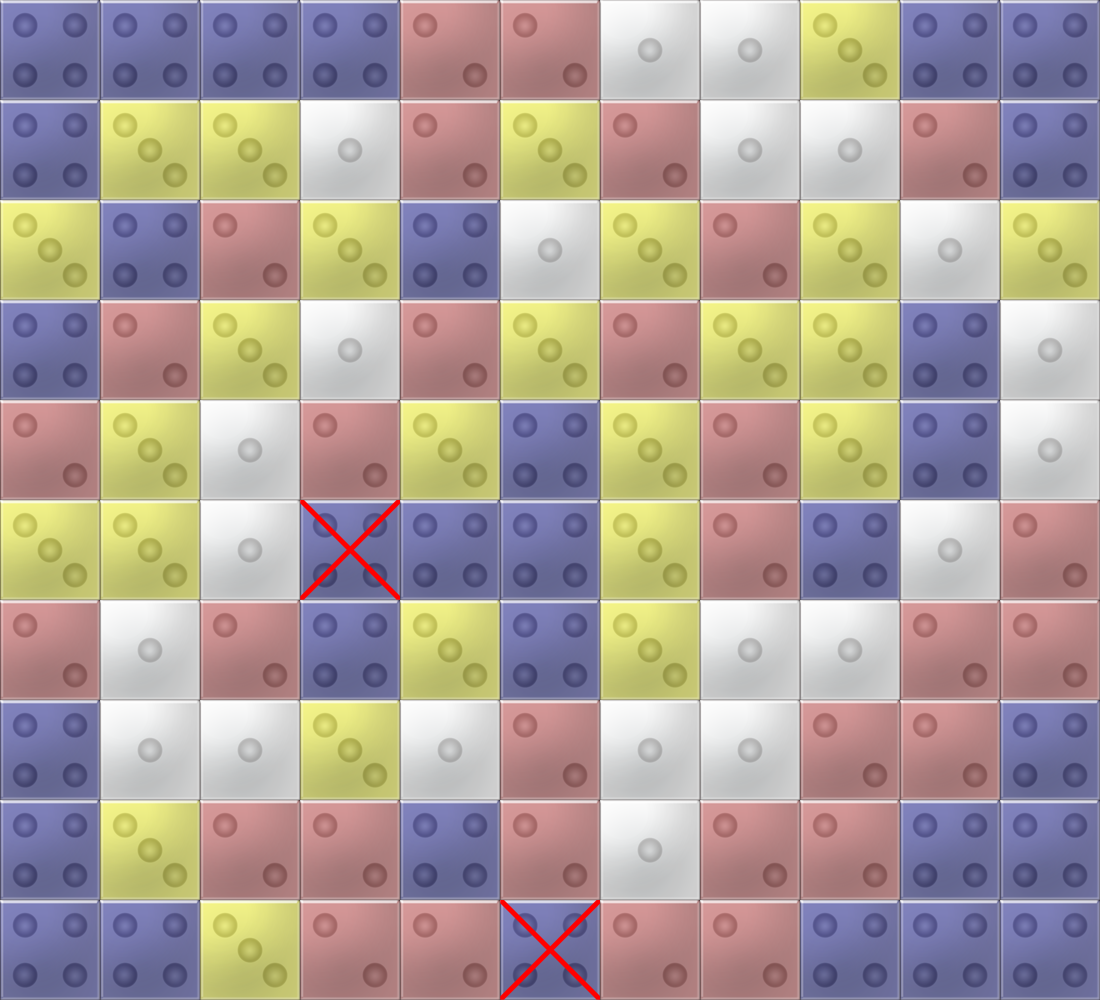 An unimaginable number of moves are possible. The clues and rules won't help you in this regard. However, there is a small amount of something else that can guide you towards the answer!

The number of moves used for the solution is between (but not excluding) 12 and 16! I wonder if anything new can be learned from this information...

Okay, this was worth persisting with! It's hard to spot exactly where to start without some trial and error, and it's very hard to explain the logical steps retrospectively since a lot of it is a case of "Well, that didn't work... how about this instead...?" but the final solution is very satisfying...

Note that in the diagrams that follow I have converted all dice to coloured digits 1-4. A black zero implies a piece has been eliminated. The two 4's with crosses in the original diagram are represented here with thick black edges - their values will never change due to the stated rules.

Moves 1-4: Note the hint to follow a 'jigsaw strategy' - this implies we should be starting with the edge pieces. Immediately we can take out the top left and bottom right corners so that their adjacent dice all now change number to become part of a larger group. However, before taking out the remaining two corners, it would be helpful to remove the two tetronimoes in the top (1's) and bottom (2's) rows...

Moves 5-6: Now remove the bottom left corner 4's, but leave the ones in the top right for now (we want to turn those adjacent 3's to 4's first, ideally). Also, eliminate the 4's in the top left, creating a large bank of 3's.

Moves 10-12: Eliminate the two groups formed by the last turn, and also the group of 2's on the left.

Move 13: Eliminate the remaining 1's, converting all adjacent 3's to 4's. (The adjacent 4 with the black edges is unaffected, remember...)

Moves 15-16: Finally, remove the 4's first, then the 3's (which have become 4's) - the grid is now fully eliminated! (And within the number of moves stated in Hint 3 - a useful confirmation.)

And what do we note by looking at the dice values at the point when they were each eliminated? Well:

The resulting pattern bears a striking resemblance to the Puzzling Stack Exchange logo, don't you think?!

Feedback for the OP, as requested:

It was pretty difficult to deduce the answer to this logically - it really was a case of trial and error until dead ends were reached, although some deductions could be made by spotting that when adjacent numbers differed by 1 it was likely that the lower number had to be removed before the higher one. As for the hints, I didn't use 2, 4 or 5 at all, although 4 or 5 made for useful double-checking at the end. I enjoyed it though - nice puzzle! :) 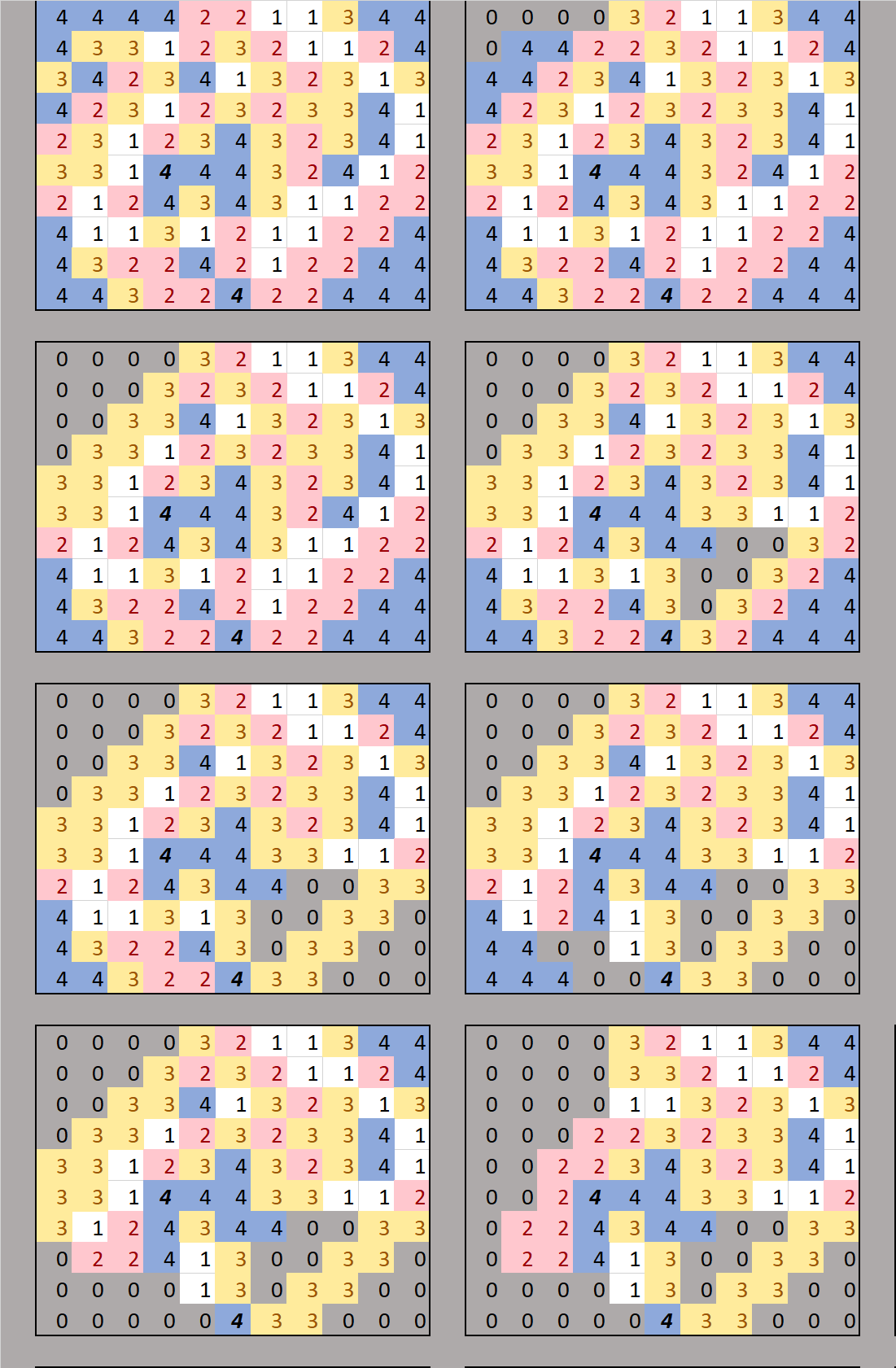 Obviously, this is a long solution, but I hope this can be of help to other answerers. 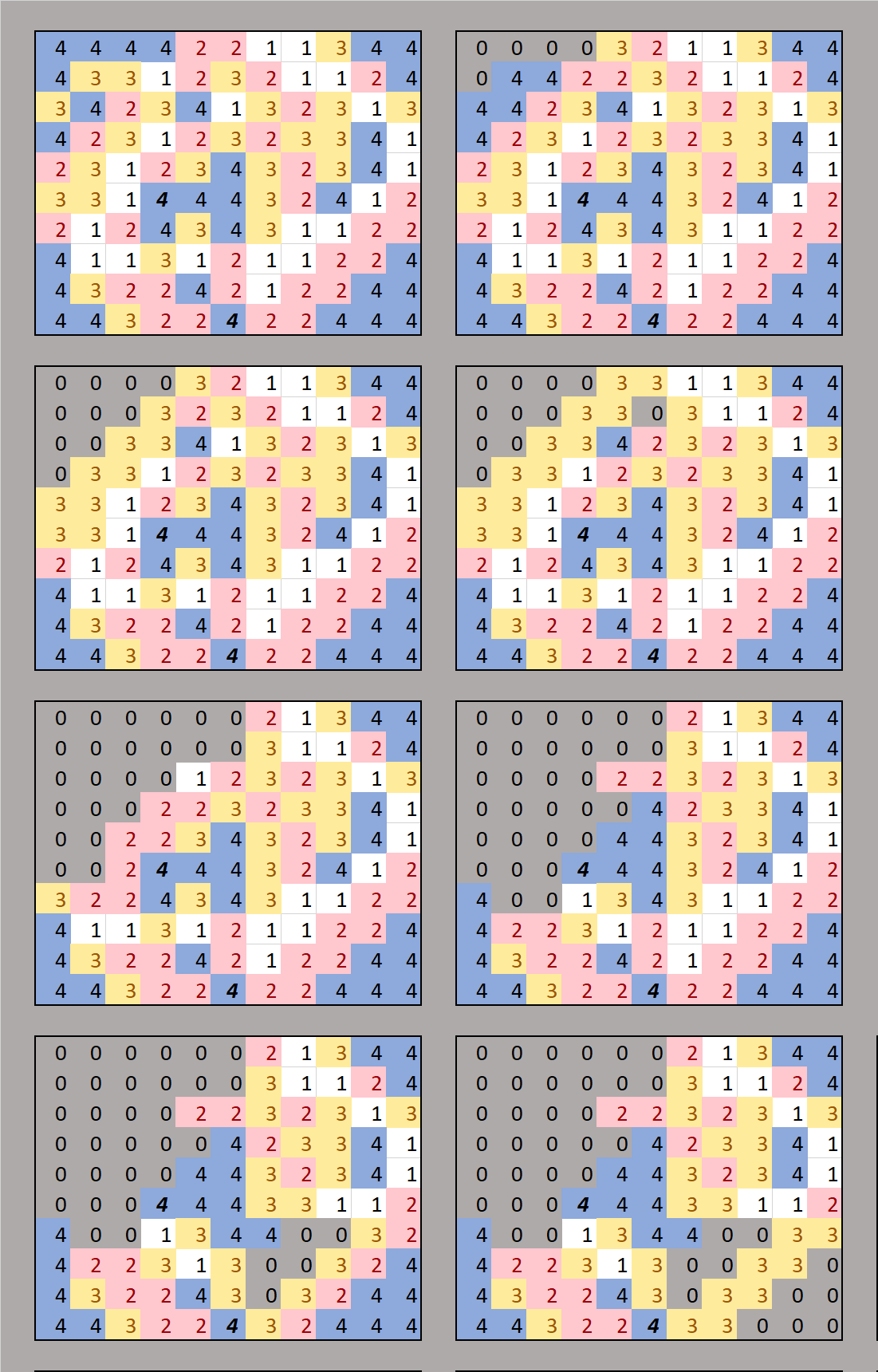 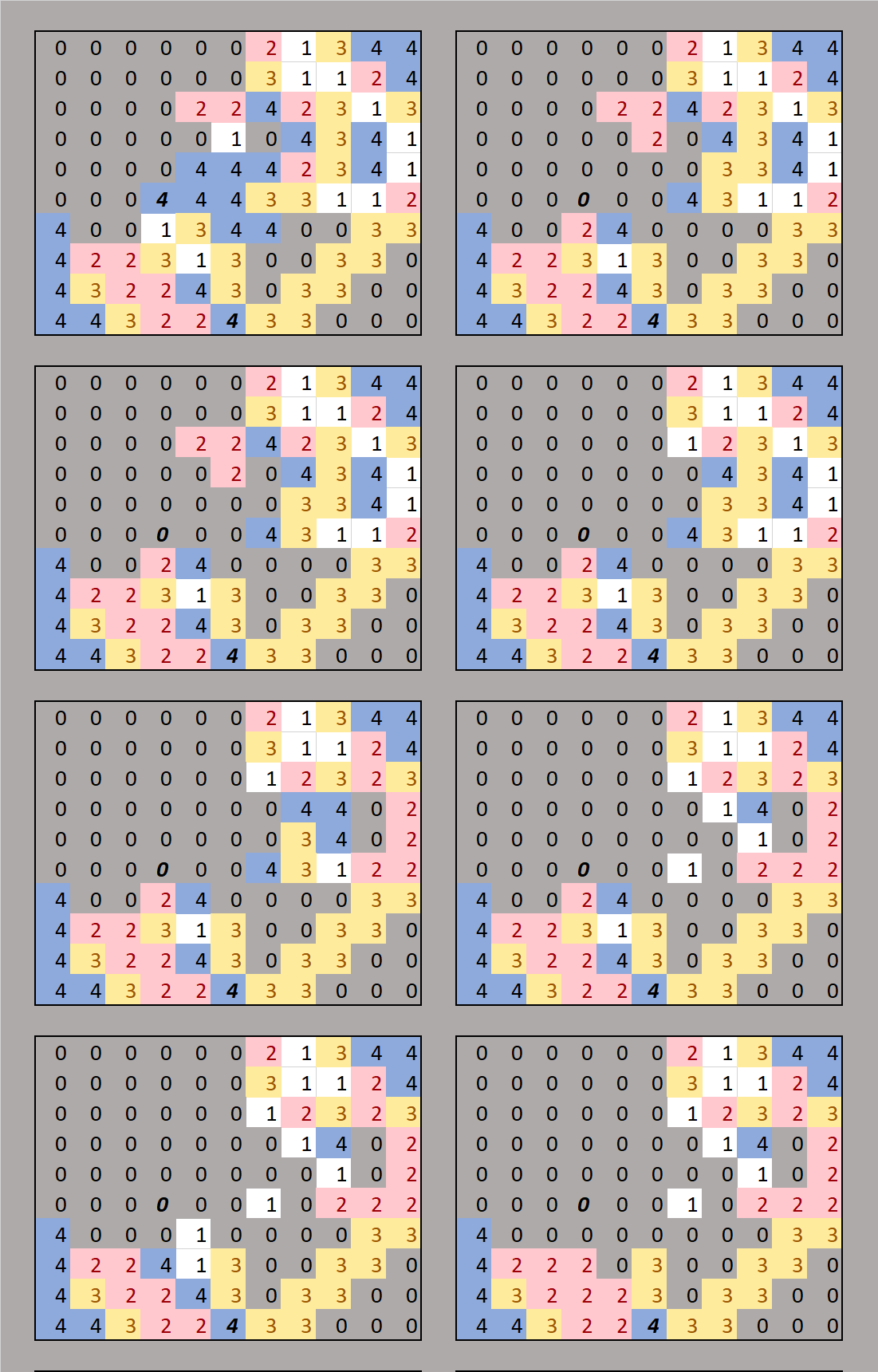 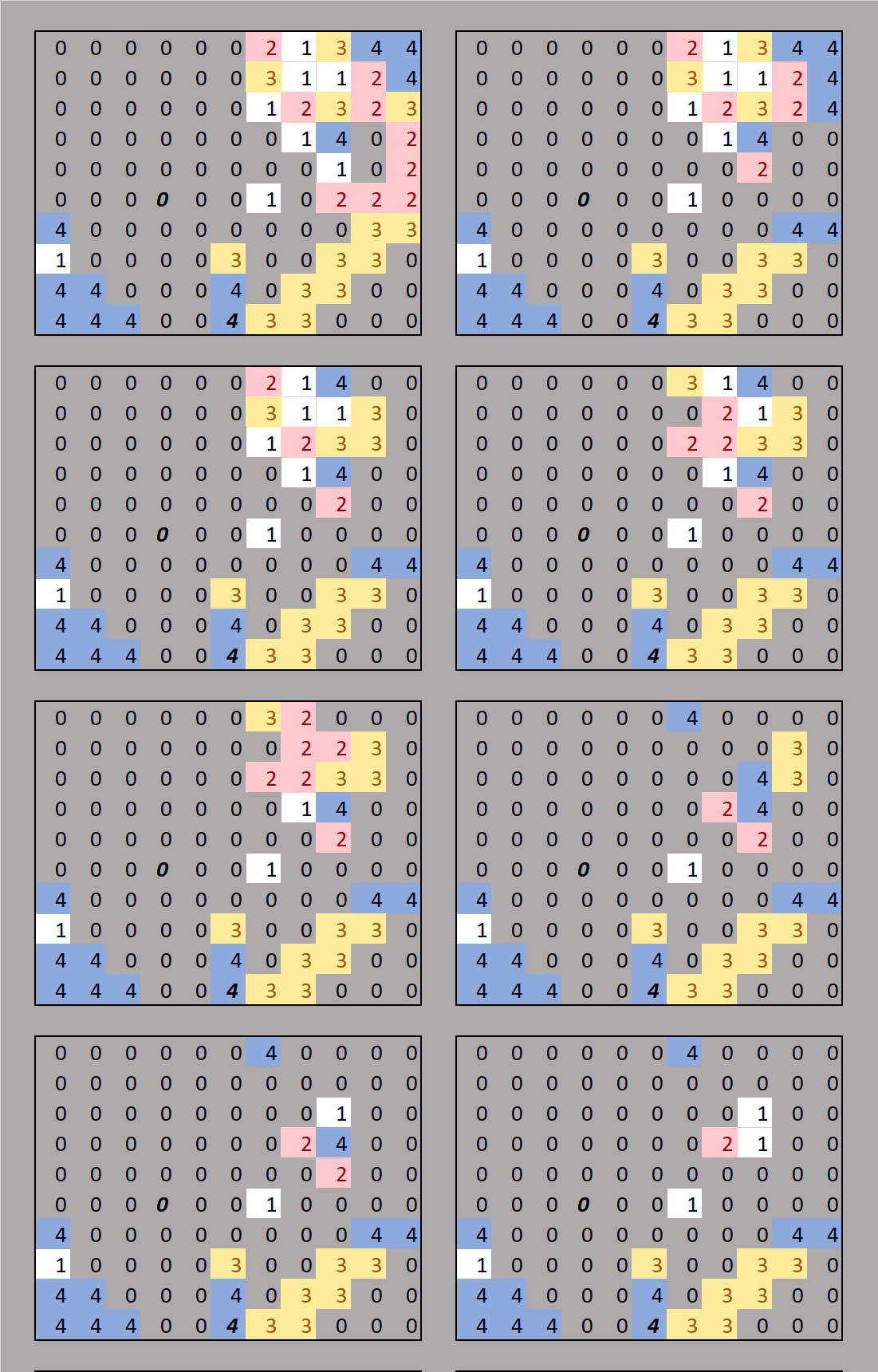 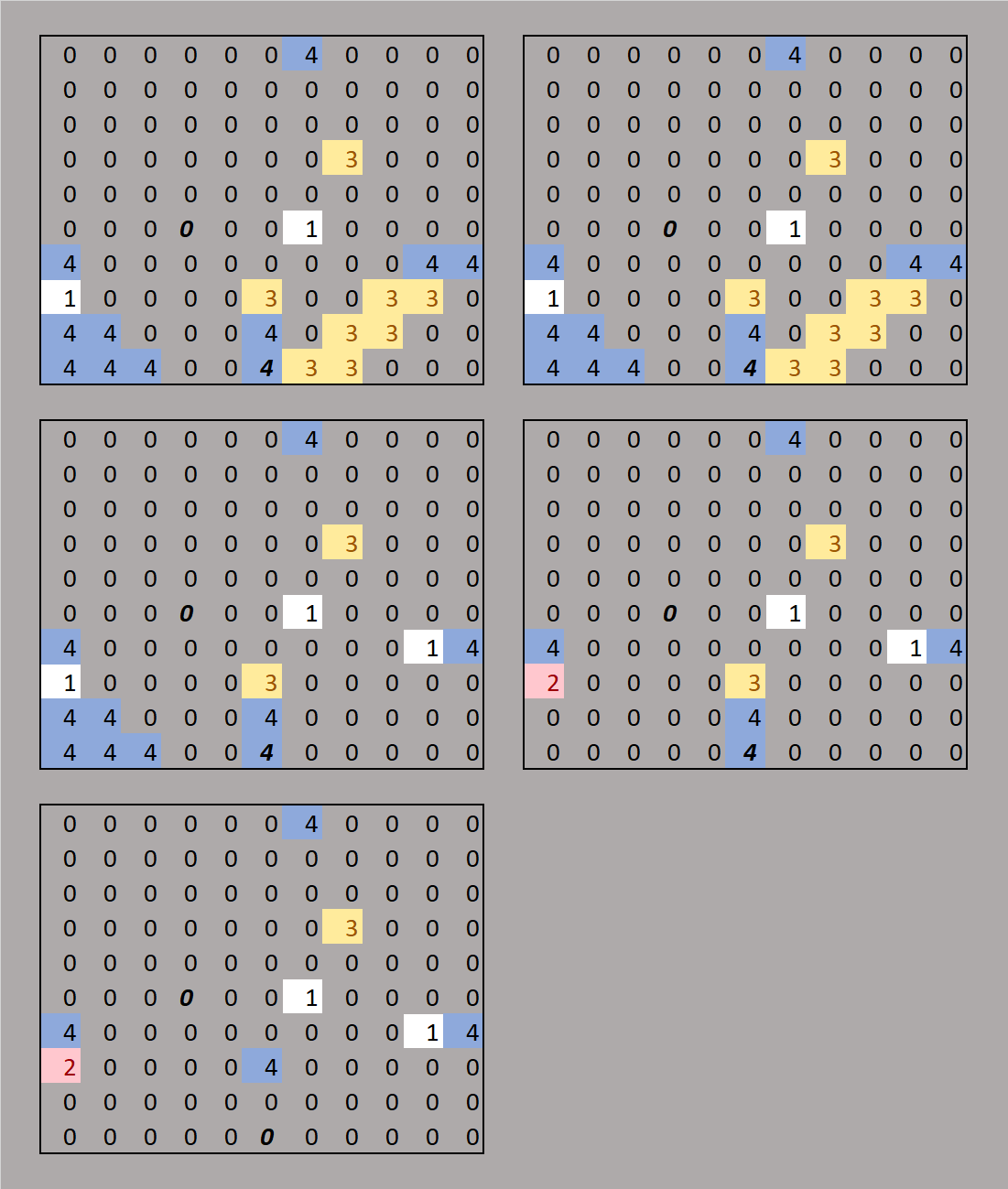 The remaining gets trivial and requires 8 more steps, rendering the solution using

Not the answer you're looking for? Browse other questions tagged logical-deduction no-computers optimization or ask your own question.

9
Color the Table
37
Sudoku net that is always solvable
7
Who are the truth-teller dwarves?
19
The Drouble with Doorples
31
Will a greedy algorithm solve Tatham's Flood?
7
Escape the cube 2 (Theseus and Minotaur variant)
3
Guide dots to land on any pair of matching portals at the same time
15
Finding the hidden path (new grid puzzle concept?)
16
Statue Park: Apollo 11
20
Isometric Heyacrazy - Now In 3D!