Locked Room Murder!! How and who?

Police receive a 911 call from Adam's neighbor, Bob. Bob heard a gunshot! The Police rush over to Adam and Bob's apartment building. The land lord, Charlie, shows the police to Adam's room. The door is locked! The police demand Charlie's keys. Charlie hands them over, reluctant to part with his keys. The door swings open freely now, and lo! Adam is dead! Shot through the heart, and who's to blame? The police know it's murder because the gun used to shoot him is on the floor, far away from Adam. Here's a list of what the police found:

When the police interviewed Bob, Bob said that Adam was in good spirits because his divorce case was about to get better. He'd found hard evidence of Nicole's cheating. Nicole said that she and Adam argued over who should get the Tesla. She said that Charlie helped her calm down with cookies and watching Avatar the Last Airbender. Charlie said Nicole was upset about the Tesla, and he helped her calm down with cookies. Charlie also said that when he went to Adam's, he knocked, but heard no response. He tried to calm him down by talking through the door for a while.

Who murdered Adam and how?

The sound heard by Bob which was audible over the CCTV (12:24: BANG!), was NOT a silenced gunshot. In fact, police were surprised to have found a silencer at all. The clue to what made the sound is in the first list.

Nicole was about to divorce Adam, and clearly, there was something going on between her and Charlie because Nicole's shirt was taken off and put back on (backwards). This implies motive.

Also, I'm thinking the BANG could have been

something to do with an explosion in the fireplace, because there really shouldn't be burn marks outside the fireplace, unless something like an explosion occurred. Charlie probably set this to occur so that he would be well away from the crime scene when the gunshot-like noise occurred... I've seen this on Monk, before! (At least, I think it was Monk!)

The murderer probably got in

using his key, as he was the landlord!

And the burned documents probably were

the proof Adam had that Nicole was cheating on him. Charlie obviously wanted to burn these so the evidence didn't exist anymore...

This should leave both hints satisfied and the mystery... hopefully solved!

It is Bob. He could not have heard the gunshot if there was a silencer.

I have several theories;

Adam asks Bob why he seems to be in good spirits. Adam informs Bob about the new evidence he acquired which he believes will swing the divorce settlement in his favor.
Bonus Theory: Bob gave the evidence to Adam.
Bonus Theory 2: Bob is also one of Nicole's lovers.

I'm fairly sure this is where the murder happens. I just don't know where Nicole got a silenced weapon from. I guess it's possible she was always carrying it, or that it was Adam's to begin with? (Maybe she went there with intent, but probably not)
With Adam showing Nicole the proof of her affair with Charlie (photos probably, maybe even taken by Bob), Nicole couldn't stand the idea of losing the Tesla to Adam and shoots him. In the heart. A crime of passion.

Nicole confesses to Charlie. She guilts him into helping her cover this up since it "was partly his fault" and "she doesn't want to rot in jail" and promises him a spin in the Tesla. Charlie masterminds a plan.
Since he knows how the cameras are set up and all their blind spots, he formulates his plan around this. He disables the fire-escape's latch alarm and uses the fire-escape to enter Adam's apartment. He removes the silencer and stashes it in the sink pipe and plants the gun on the floor, with the intent to make it look like a suicide, since if no-one could get in there without a key, it had to be suicide, right? Or an accident at least! (It would have been better to plant it in Adam's hand and I cannot figure out a reason why he wouldn't have so a hole in my theory) He makes a fire and burns the evidence documents. The Tesla will be theirs! He latches the door and heads back to his apartment via the fire-escape.
He instructs Nicole to turn her shirt inside out as a show for the camera, more credit towards their alibi. The plan is almost complete.

Just enough time to make an appearances on the cameras as a concerning landlord. I wanted to say he could expertly flick one of the spare bullets into the fireplace through the crack the chain latch leaves, but the bolt wouldn't allow that or locking from the outside. Which means he had to go plant the bullet in the four minutes after this appearance via the fire-escape.

The planted bullet explodes in the fireplace, sending some documents and paper and coals out which scorched the floor and alerting Bob.

Adam threw the files and the gun into the fire after speaking to Nicole. The gun fires, hits Adam by dumb luck and the force of it firing tosses it out of the fireplace. As "out of place" a silencer is here, the fire could also be an "out of place" item.

Well, how is this even possible and why would they do this?

I have no gun experience so I cannot say this for certain however what if Adam removed the silencer and put it down the sink in order to frame Nicole and/or Charlie for murder? The door was latched when Charlie talked to Adam and Adam saw his opportunity when Charlie left. He moved the latch in the door to make it loose, laid the gun on the floor next to the fire and threw the documents into the fire (evidence which implicates Nicole/Charlie). The documents burned quickly and the fire was hot and large. This allowed Adam to lie on the floor in front of the gun and the gun discharged from the heat. The recoil sent the gun backwards. This would explain the burn marks as they would be from the bullet that discharged close to the ground (I think?) and why the gun was a distance away from Adam. In reality Adam wanted revenge and he was pleased that the documents allowed him to do so! It is clear that Charlie and Nicole were conspiring against Adam (due to obvious reasons) so Adam may have learned about this and decided to take action. Charlie could easily retrieve the documents and/or blackmail Adam etc. so Adam felt trapped and knew that he would never win the case.

And here is the punchline

Charlie and Nicole knew that they hadn't done it so when the police asked for Charlie's keys, he was really nervous. The latch was a trap set for Charlie, maybe Adam knew that Charlie would be the type of person to alter the scene if he came across it but by making the latch seem locked to Charlie, Charlie would think that the police wouldn't suspect him so he would leave it as-is! Of course the police wouldn't know about this and the door easily opens, implicating Charlie.

Nicole hid the gun (or silencer) in Adam's apartment at some time between 10:45-11:02am and convinced Charlie of her plan during 11:02-12:04am. Charlie goes to Adam's apartment and within the span of 5 minutes he shoots Adam, probably making some noise to mask the silenced bullet (for example: talking loudly). He then quickly burns the documents and puts the silencer down the sink. He then left the apartment, locked the door and walked somewhere hidden nearby to make a sound like a gun firing (4 minutes later). This would give him an 'alibi'.

The fact that the silencer is hidden and that the last person only visited for 5 minutes implies that the killer tried to obfuscate the time of death, especially since the state of the scene makes it look like the killer was in a hurry. Furthermore the gun was a good distance away from Adam so it looks like a murder. Charlie and Nicole had a reasonable motive and the length of time for each event makes sense from this point of view. Charlie's reluctance to open the door and confusion because of the latch places more suspicion on him. To the police it looked like Charlie had full access to the room. Since the 'murder' had to be premeditated and since Charlie and Nicole would refute accusations to the best of their ability, they would both end up with the worst conviction possible. It wouldn't even matter if Adam's crime was exposed because as per @GridAlien's deduction Charlie and Nicole's lives would be ruined by this point! 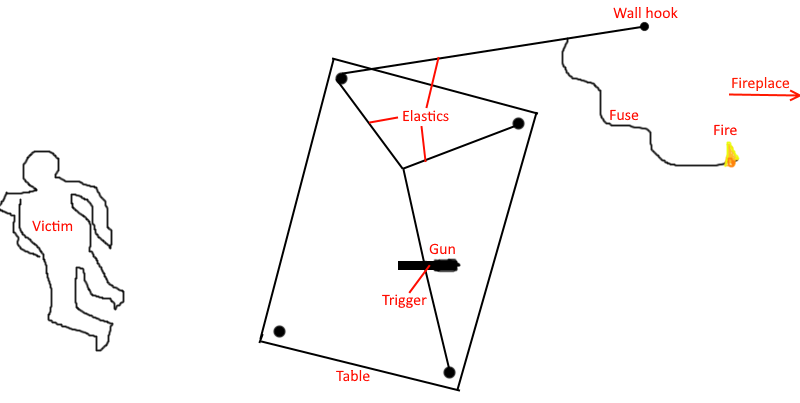 When the fire from the fireplace runs up the fuse, it snaps the first elastic, causing the other elastic which is strung through the trigger to spring back, pulling the trigger and firing the gun, killing the victim. (Presumably this is a suicide, since he'd have to be sitting in the path of the bullet and aware of the setup.) The elastic, still on fire, burns up leaving nothing but scorch marks and ash as evidence before witnesses arrive. The gun might've been propped up by some books or something, but obviously when it fired, the recoil sent it sprawling so it's not in the same place anymore.

20
Mysterious Murder Mystery 3
4
A Murder Most Foul: Alicia Adams
4
Murderer, Car and Colour
4
Who is a real time traveller and who is lying?
1
Keep calm to decipher it. What is it and what did they share?
23
Charlie goes on vacation
14
A simple murder mystery puzzle that I came up with
4
A locked room puzzle