Tempoverlustspiel-A German word that roughly translates to "loss of tempo game." An interesting chess term that I leaned a while ago.

With White to move in the below position, how many moves will it take, with both sides helping each other out, for Black to help White lose a tempo, and reach the same position, but with Black to move instead? 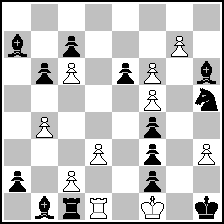 Have fun, and no looking up the solution please!

At risk of being wrong because of a mental mistake:

It's easy to reason that the total amount of moves by White must be even:

The only moves White can make without irrevocably changing the position are 1. Re1, 2. Rd1, 3. Re1... ad infinitum. This means Black needs to recreate the current position of the Black pieces in an odd number of moves, as to allow (even):Rd1.

Black's only piece that can break parity is the King, since the Bishops are both effectively trapped as they can never capture

our first Black moves are

at which point we can finally lose our tempo. Since White's next move is 28. Rd1,

Well, I'd thought to prove that it was insoluble

All pawn positions are locked in place. They can neither move nor be taken.

The black knight is locked into place. All of his available moves would either involve taking a pawn, or involve putting the white king in check - which would require the white king to take a pawn.

- The only white piece that can move is the rook, and he can only move between d1 and e1. If he attempts to leave the 1 row, he puts his king in check from the black rook, and the black rook cannot escape the pin without first moving to d1, which would force white to make a non-reversible move. he requires an even number of turns to return to origin. Thus, the black rook is also locked in place.

...and this is the point where my proof falls apart and I realize that @Braegh has the right of it because...

The king can sneak by the white pawns at the top if you move the black bishop all the way down first.