This puzzle was inspired by @RewanDemontay's puzzle De-zephyr The Solution!. Rewan kindly granted me permission for making this puzzle and citing his as my source of inspiration. I thought of naming it "Zephyr that!" but titles can't be that short on SE.

You're a little girl playing chess with your brother. He knows that you have just learned the rules and he's been toying with you for the whole game, setting up half of his pawns for promotion and getting his pieces into a nice square shape while your king was constantly under checkmate threat. He was hardly paying attention to your moves and didn't see that you were cooking up a little treat of your own.

Please wipe out the entire set of black pieces and deliver checkmate in as few moves as possible.

Your brother is playing optimally and making every move he can to make the game last longer (and of course if you misplay he will not miss an opportunity to win or draw).

Bonus: at some point, your brother grins in delight, thinking you've lost control of the situation. You just captured a rook and four black pieces are left on the board: a pawn, a knight, a queen and the king. You did not choose the shortest way to a complete cleaning of the board, but you are still pretty much in control of the situation. Prove it to him and deliver checkmate to a lone king with your 49th move. 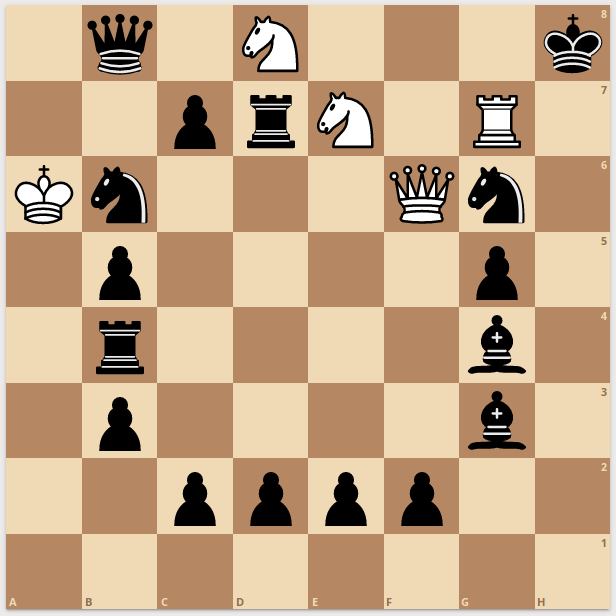 (Updated) This time around, the pawns are the obstacle, as they can move forward to defend all while being promoted

What a cruel little sister though, she could have ended his misery with just one move starting with this board !

My inner little sister can do it in

Not sure this is optimal, though. Bonus answer is given as a variation.

6
De-zephyr The Solution!
6
Don't bully your cousin at Reversi

16
Replace a piece to checkmate
11
Checkmate all the kings #3
9
Checkmate all the kings #4
11
One-sided chess: Can you stalemate yourself?
12
A Chess Lock Puzzle?
8
Three-player chess on a 7x7 board
7
A delve into extraordinary chess problems: Selfmate 1
7
What is the minimum-value piece combination necessary to checkmate in this game of Crazyhouse?
4
Chess - I will eat!
6
Chess - Knight Mate