Herman lives in a house on the Caribbean island of Kinja, where the weather is warm all year. Let’s assume all Kinjan houses are of similar construction, and no houses have a water heating system. Herman takes a shower every day at 5 pm, and at the end of his shower, he measures the water temperature coming out of the shower head. Below are the results for a 150-day period. 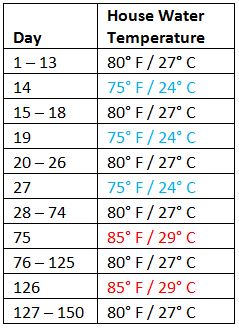 What is the likeliest explanation for the drops (blue) and spikes (red) in water temperature?

These fluctuations happen to all houses on Kinja, sometimes on the same days, and sometimes not.

Updates: As mentioned in the comments:

Herman’s shower takes the same amount of time every day.

Seeing "exactly" the same temperature numbers on various days is not important, and is just to simplify things. The numbers just convey drops (blue), spikes (red), and normal (black).

The following groundbreaking info was found by @oleslaw:

The houses on Kinja have cisterns.

Cisterns are built below ground level, often where a house’s basement would be. Cisterns are common in the Caribbean islands where well water is brackish, and there is no municipal water system to pipe water to houses.

the houses on Kinja have cisterns below ground level

rainwater. A fresh rainstorm would result in free, cool water refilling the cistern. A shower shortly after rain would be cooler than normal. The temperature dips in the data come only a few days apart, representing a cloudburst every few days in Kinja's rainy season. The temperature normalises soon afterwards as the coolness of the rains wears off.

As for the rises in temperature:

After the rainy season Kinja enjoys much hotter drier weather. Water supplies get low and cisterns must be replenished manually by the homeowner before they run out. The water to achieve this must be purchased from a local merchant whose large bottles/barrels/tanks of water have been sitting out in the sun, absorbing heat. This water will thus naturally be warmer than the usual supply. To save expense water is purchased only infrequently, in larger batches, hence the longer periods of time between temperature peaks.

This is my breakdown of the question. I couldn't find the final answer, but I hope it helps.

The story of Herman living on Kinja is a reference to

The novel takes place at fictional island named Kinja, which was owned by Great Britain.
According to the novel itself, there is a hotel on Kinja. Following the plot, there is a water shortage, which remains a major problem for the hotel keeper. Maybe his efforts to refill his cistern affect the total amount of water nearby, so the temperature differs (less water requires less heating - by the Sun), but this would not explain the fact that not all Kinjans experience this at the same days.

It is said that exactly at 5p.m. the British like to have a tea, which requires boiling the water and drinking hot beverage, so I believe the expected explanation is related to this fact. Even though the OP stated explicitly that the 5p.m. tea is not important, I believe that the 5p.m. itself plays a role here.

Feel free to use the answer above to create your own ones.

Considering the @FlanMan's comments and the other answer

The important fact is that the houses have cisterns to store water.

So the fluctuations are caused because of the

Sun heating up the cisterns or clouds covering it and thus cooling.

----PREVIOUS ANSWER----
The fluctuations may be caused by the

The water is taken from the sea, which is heated by the Sun and cooled by the rain.
If it is raining, the water is cooler than normal and if it is unusually sunny, the water is a bit warmer.
It does not always affect all the Kinjans, because the island is large and on different parts of it there is different weather.

Not the answer you're looking for? Browse other questions tagged knowledge situation or ask your own question.

7
Somebody has kidnapped Jason Baker!
1
In standard isolated lab
6
Espionage at the Chinese Restaurant
25
A strange family indeed
24
Hacked maps, back in the UK
2
Silent Chinese Whispers
6
Peter the Puzzling Plumber