@Don Kirkby have designed a set of dominoes puzzles that they call Donimoes. You slide the dominoes like the cars in Nob Yoshigahara's Rush Hour puzzle, always along their long axis.

I have altered this puzzle by changing numbers to letters.

Move a domino one space along its long axis so that none of its letters match an adjacent letters on a neighbouring domino. 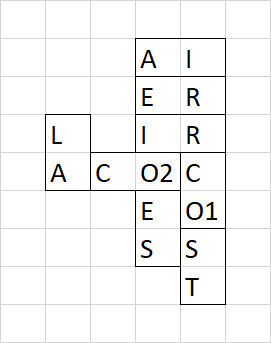 1) There may be more than one solutions. The one that I am looking for will form something special.

2) The two "CO" tiles have been named as "CO1 and CO2" for your convenience. Stay calm - they are not harmful nor toxic :P

CO1 and ST tell us that the vertical side of the rectangle is of size at least 4.

AI, ER, IR and CO2 tell us that the other side is of size at least 4 as well. Therefore we are aiming at a 4x4 square.

$\bullet$ you need to have moved the other O to the left before that (there is not enough room on the right) otherwise you break the no two identical letters adjacent rule.

$\bullet$ you also need to have moved IR to the left (to make room for the CO1 to move up).

$\bullet$ you cannot possibly have moved ES up, otherwise moving CO1 would result in disconnecting ST from the rest of the board.
Conclusion: at that very moment, the block CO1 ST ES is disconnected from the other letters.

Not the answer you're looking for? Browse other questions tagged letters sliding-blocks dominoes or ask your own question.