Detectives Kirk and Singh were looking at the crime scene where Ken Dobbs lay dead on the ground. They were certain that it was a murder because of the stab wounds and the blood all over the crime scene. There was no murder weapon.

Dobbs was one of the 2 owners of the contracting firm D & I (Dobbs and Irwin). Ken Dobbs was killed in the office and was found almost simultaneously by his partner Daniel and the executive assistant Chris when they showed up for work around 9 AM. It was also interesting to the detectives that a disgruntled customer Tommy Wilson also showed up just after 9. To complete the suspect list Ken’s ex-wife Trish had left several hateful messages on his voice mail regarding alimony payments and child custody. The detectives also found a blood splattered business card of D&I in Dobbs’ hand on which he seemed to have scribbled a few letters before he died.

After talking to all the Persons of Interest, the detectives summarized their findings as below:

• Dobbs was murdered between 8 and 9 AM that day

• The firm was having financial issues and Irwin blamed most of them on Dobbs’ crazy spending habits.

• Tommy had several public rows with Dobbs because he did not finish the bathroom remodel job. Tommy claimed that Dobbs and the firm owed him 5K$

• All except Tommy lived within 1 mile of the office. Tommy said he took the bus this morning which was a 1 hour ride. He showed a ticket punched at 8:10 AM that day departure time. This was verified.

• Nobody else had alibi.

The detectives concluded that Dobbs knew his killer and tried to write it down on the business card. Kirk suspected Tommy but Singh was not sure. 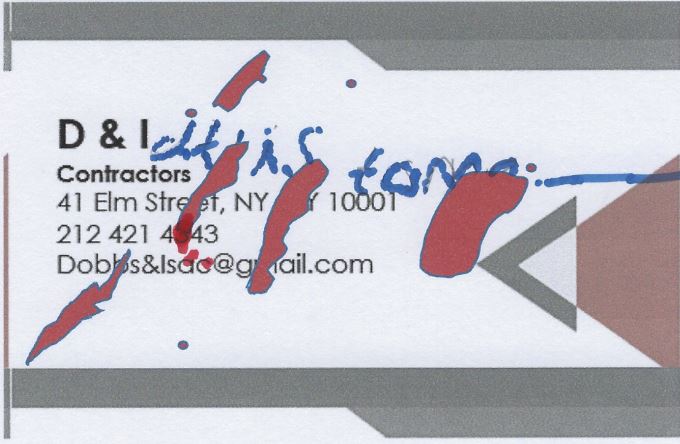 The murdered Dobbs has tried to relay this message by writing:

The firm was having financial issues and Irwin blamed most of them on Dobbs’ crazy spending habits. With Dobbs out of the way, Irwin believed he could then try to get the company's finances back on track. Furthermore, Irwin was still upset at Dobbs having messed up his name on the company's official business cards ("Isac?? Do you even know my surname, Ken??") - hardly cause for murder by itself, but definitely a symptom of an unhappy working relationship...

A note on execution:

Perhaps Irwin timed the murder for this particular day knowing full well that Dobbs had recently received threatening messages from Trish and that Tommy (possibly) had an appointment with the management at 9 to discuss his complaints, immediately creating two main suspects for the murderer. After committing the crime Irwin then intended to double back from the crime scene before opening hours so that he could walk in with his assistant Chris at 9am and be seen to have an alibi. Unfortunately for Irwin, Tommy overslept and missed his regular bus which would have put him at the scene of the crime at the right time. Once the police enquiries exonerate Trish, it's only a matter of time before the net closes tighter around the nefarious Irwin...

Maybe that's weird, but in my opinion the killer is:

nobody!!! He just committed suicide.

Write on the card: "i do this to me"-I -Meaning "I" and not a clue to another person's name,And i can understand him he went through hard days, both in his personal life and at work,He was also ashamed and tried to disguise that he had written it beforehand And tried to imitate a shaky manuscript(you can see pencil under letter m) as well as tried to stain it with his blood in a way they think he was murdered -Because if he was indeed murdered the blood should have been in the heart / head / lungs area and not in his hand so it drips onto the page.

Some of the writing has the words “it is Tom” on it. Further, the bus ride was an hour long but Tommy showed up just after (to me, this means less than 10 minutes after) 9am, even though the bus left at 8:10am. He could have also gotten someone else to ride the bus or buy the ticket, bus tickets aren’t ID-specific. Further, the business card didn’t come from inside the organization — I can’t imagine Irwin would be too happy if his company’s business cards misspelled his name as Isac.

of the misspelled name on the card? :)