Triangle in a circle

What's the probability that the triangle contains the origin of the circle?

(Although I have an answer, I thought I would throw it out there and see what others make of it!)

That the triangle does not contain the center if and only if all three points are contained in a half-circle. So, only the polar angles of the points matter, not their distance to the center.

Disjoint (well, overlap with probability 0), and comprise all the way the three points can be on a half-circle, since there's always exactly one for the other two are within half a circle clockwise. So, the probability of them being on a half-circle is $$3/4 = 1/4 + 1/4 + 1/4 $$and so the probability the triangle contains the center is the complement $$1 - 3/4 = 1/4$$ By the same argument, if we generalize to choosing $n$ points and connecting them in a polygon in cyclic order of polar angle, the probability that it contains the center is $$ 1 - \frac{n}{2^{n-1}}$$.

Theorem: Let $R$ be a (bounded) region that is centrally symmetric with respect to the origin. If three points are randomly chosen from $R$, then the probability that the resulting triangle contains the origin is $1/4$.

As a special case, we derive that the corresponding probability for a circle is also $1/4$.

(1) My argument heavily uses the fact that exactly one of the following two statements holds true for any triangle $\Delta$:

(2) Now consider the region $R$, and let $\ell$ be a horizontal line through the origin. We will assume throughout that none of the three randomly chosen points does ever land directly on line $\ell$ (as these cases have measure zero in the underlying probability space).
A situation where the triangle contains the origin is called "success", and a situation where the triangle does not contain the origin is called "failure".

As the sum of these four success probabilities is $\frac34\cdot p^* =\frac14$, the proof is complete. 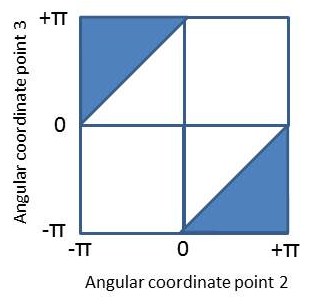 Put the center of the circle as the origin of a polar coordinate system. Then each point is determined by and angle $\theta$ and a distance $r$ from the origin (we will assume none of the points lands on the origin). Then the triangle joining the three points will contain the origin if and only if the three $\theta$ values are not contained in any half-circle. 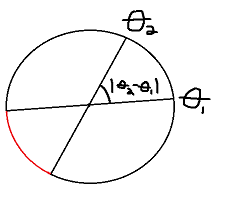 Thanks everyone for their answers. Here's mine which is close in spirit to a couple of the existing ones.

Consider a circle centered at the origin. Without loss of generality, let one of the points lie on the positive $x$-axis, call it $p_1$. We can do this just by rotating the coordinate system and the fact that the probability the origin is one of the points is zero.

Those two conditions being satisfied, we also require that the difference $\theta_3 - \theta_2 < \pi$ since if the difference is greater than $\pi$ it is possible to draw a line through the origin which doesn't intersect the triangle. 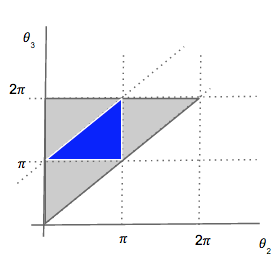 4
Probability of three segments forming a triangle
13
100 Dwarves vs. the Evil Elf
6
How many dimensions?
3
Inner Triangles in the circle
4
Dodecagon in a big circle
3
Hexagon in a circle
8
Geometry haberdasher problem - square to equilateral triangle variation
5
Achieve the best outcome by a tactical statement