Ask Question
Asked 7 months ago
Active 7 months ago
Viewed 218 times
2
$\begingroup$
Closed. This question is off-topic. It is not currently accepting answers.

I'm sure this has been asked before, but I tried searching and couldn't find it. I don't know the solution, and it is possible there isn't one.

There is unsavoury pirate and an unscrupulous merchant. The Pirate would like to trade some of his ill-begotten treasure for some shady merchandise. However, neither the pirate nor the merchant are trust-worthy. Given the chance, they would like to get what the other is offering without giving up anything. They will lie and cheat if necessary, and may even resort to the use of force if they think they can get away with it.

There are no third parties that they can turn to.

Is there a process by which they can exchange their articles in such a way that guarantees that no one will get taken advantage of?

I've been thinking of solution involving cryptography algorithms, but I am open to anything that seems plausible.

There are three necessary assumptions here:

(1) It is possible to build a physical mechanism that neither one of them can break.

If this were not the case, the only way trades could be made is by one person directly giving an item to the other. However, just giving items back and forth doesn't work: as soon as there's an imbalance in the wealth gained, the person with more can grab everything and run away. So there must be someone or something else involved: under the condition that no other person is involved, this assumption is necessary.

(2) All items in this deal are verifiable visually to not be fakes, without physically touching them.

If this were not the case, during the necessary physical inspection, one of them could run off with the item being inspected. So this assumption is also necessary.

(3) Neither one of them can coerce the other into giving up an object if they do not want to give up that object.

If this were not the case, either one could just extort the other, without having to give up anything in return. So this assumption is once again necessary.

Under these three assumptions, there is a mechanism that allows for perfect security in trades. The mechanism should be built into a large wall, so that the two people taking part in the trade are separated. It consists of:

This device is not just theoretical, though: it has been implemented to solve exactly this problem... in Minecraft. YouTuber SethBling made a trading system that solves this problem with a mechanism similar to the one I describe here.

The pirate and the merchant could meet in a large, open field, stand about 10 paces apart, and face each other, the pirate facing southeast and the merchant facing northwest. Their vessels would need to be moored or parked in the direction to their rear. Here is an example graphic: 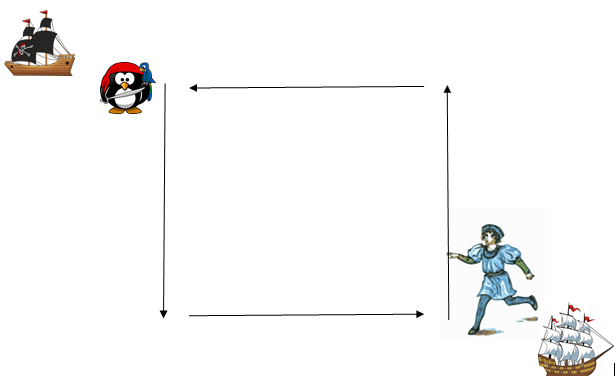 They would now be in possession of each other's loot and be near their starting points and vessel/boat/etc.

I don't imply that this is the perfect solution, but it requires no additional people or resources, other than a compass.

They each witness the other seal away wealth exceeding what's at stake in the deal, then exit and lock the vault. They then proceed with their business, with the ultimatum that they will only unlock the outer vault once they have received their end of the bargain. Assuming they place little value in denying funds to the other without personally profiting, it remains in both of their best interests to hold up their end of the deal.

Find a narrow ravine and have one person stand on either side with the goods to be traded. Suspend a log over the ravine from a single rope in the center, so that it can spin freely and one end can be reached by either party. To start, each end of the log is firmly fixed to the ground on either side, so neither party can spin the log until both release it. Each party ties their goods to one end of the log, and once both can see the other party has done so, they both release the log, and spin it so that they now have access to the opposite end of the log with their trading partner's goods. The log only spins when both parties let it, and no one ever has access to both sets of goods at the same time.

This solution requires that both parties can verify that the other party has indeed put up their end of the bargain by tying it to the end of the log, and can do so from the other side of the ravine.

Exchange their treasures one coin/gem at a time - this way, any losses are minimized.

We wish to swap the values of P and M without either ever having more than the other (and thus running off with all the loot!). This is IMPOSSIBLE - the only swap routines using only two variables invariably create the scenario with one variable greater than the other. For example, the XOR swap algorithm.

The main idea (trivial but still):

They should offer checks and balances against each other. If the pirate cheats, the merchant must have a chance to take back the excess value later and vice versa. Same goes for the merchant asking for too much in return, the pirate's counter-request, and so on. Rinse and repeat, and the deal won't be completed until no one cheats the other.

An idea how to do that:

They go to a room split into two by a durable, thick wall with bulletproof glass, and put their money and valuables into a double-sided safe that's too heavy to move around in the gap in the middle of the wall. Then they take what's worth, but if they take too much, the other will move to the safe and take some. The room has some sort of a mechanism preventing both from escaping unless both give up on taking more (by staying away from the safe) for over a certain time period.

Not the answer you're looking for? Browse other questions tagged lateral-thinking strategy or ask your own question.

8
How do we get those dang Illuminati?
8
A puzzle of trust and lies, allies and spies
28
A 600 foot Rope, and an 800 foot Drop
6
The Fanatic Fever(twist on the 5 pirates puzzle)
7
A generalization of Tyler Seacrest's “Three voting prisoners” puzzle
16
Let's make Mango Orange Apple Juice!
9
Salary sum with a twist
9
Pirate Puzzle Double Twist