I have a 8 piece wooden puzzle that I found in a yard sale that I can not figure out. All pieces are the same thickness.

Thanks for all help.

Sorry about the last post, new here and not sure how all this works.

Thanks for all the ideas from everyone. The person I bought this from swore that it was just one puzzle and made a cube.

The only way I was able to make a cube was by loosely stacking the blocks on top of one another, but then this does not hold together, and then why the notched pieces?

Please see other photos, thanks. 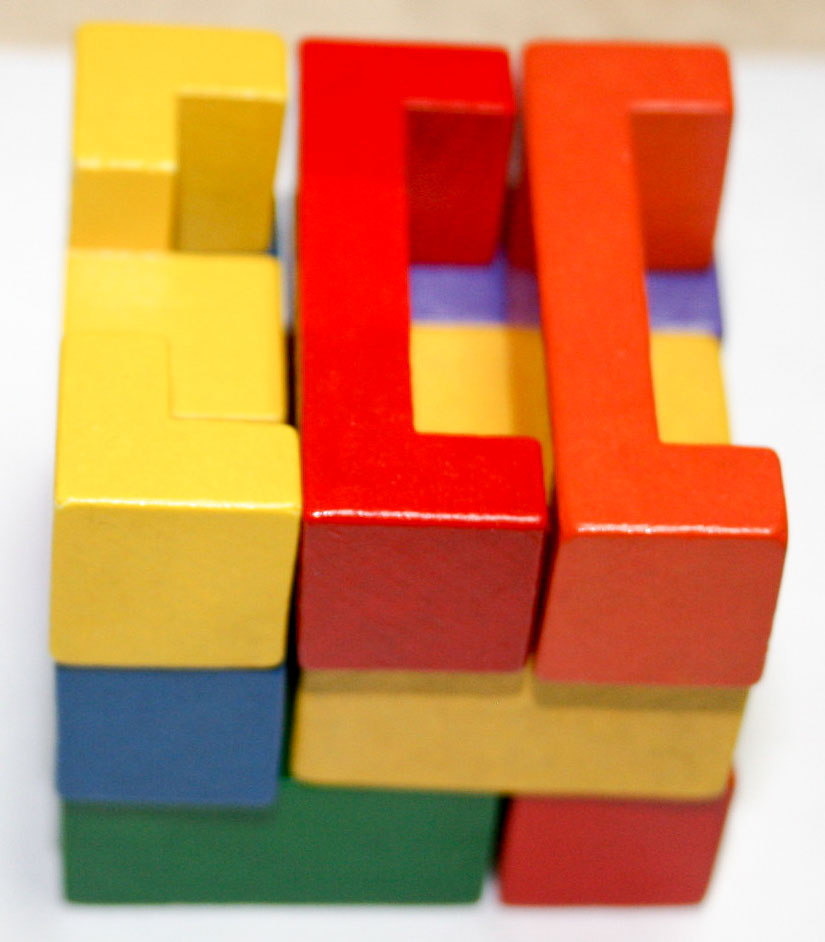 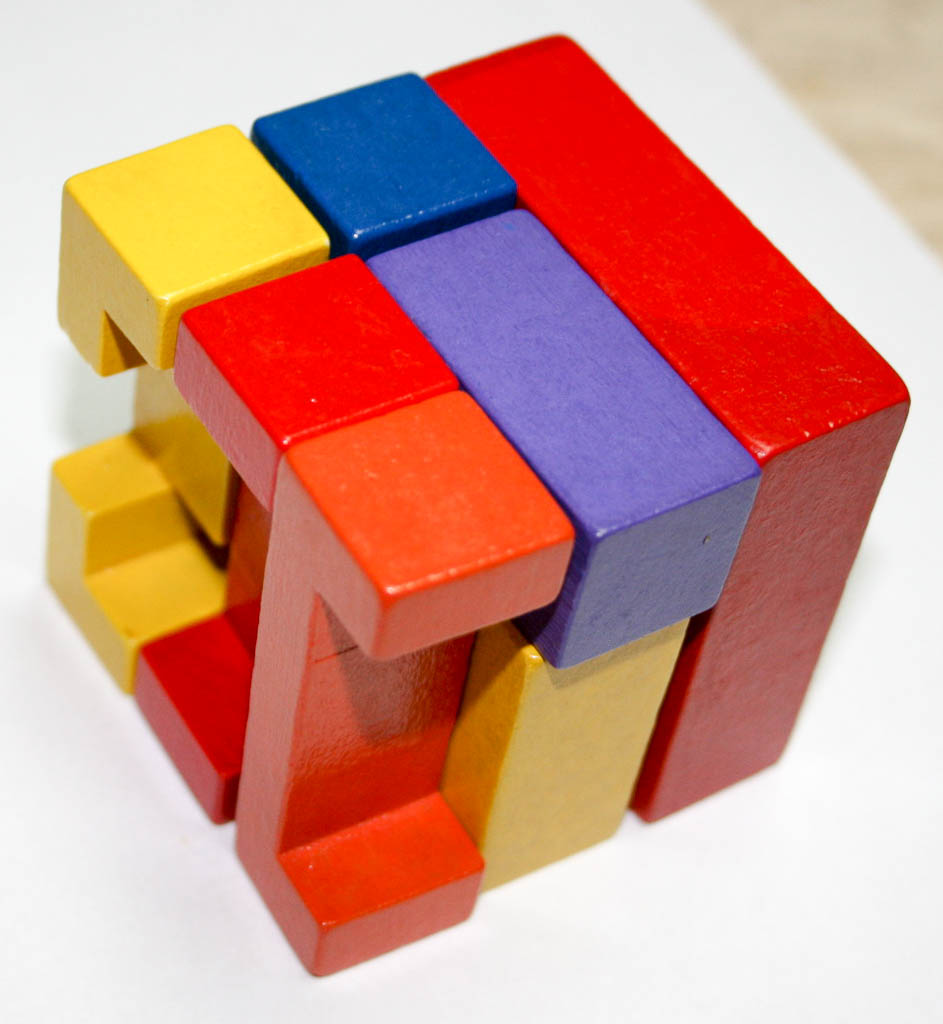 If we call the common height of all these pieces one unit, then collectively they contain 24 cubic units' worth of stuff. So we might expect that they form a cuboidal block of size, let's say, 2x3x4 units. But I think this is impossible!

So, I think at least one of the following things has to be true.

One kinda-plausible possibility is that they form a 3x3x3 cube with some gaps (and part of the challenge will presumably be to assemble things in the right order, which will need some burr-puzzle-style sliding around). Another, mentioned by Jaap Scherphuis in comments, is that these are actually pieces from two separate puzzles (probably made by the same people since the pieces are so similar).

I think I have found out what the two puzzle are to which these pieces belong.

The middle four pieces are part of a fairly standard burr puzzle, i.e. a puzzle which when solved has three pairs of parallel pieces intersecting each other to form a kind of three dimensional cross shape. Of the four pieces you have, the fourth is the unique key piece that is inserted last. I believe that the two pieces you are missing are one of each of the other two types of piece you have (though instead of another copy of the first two pieces you could have a similar piece with a block in the middle, i.e. with just two slots). The best picture I've found is from this site, though it uses slightly longer pieces: 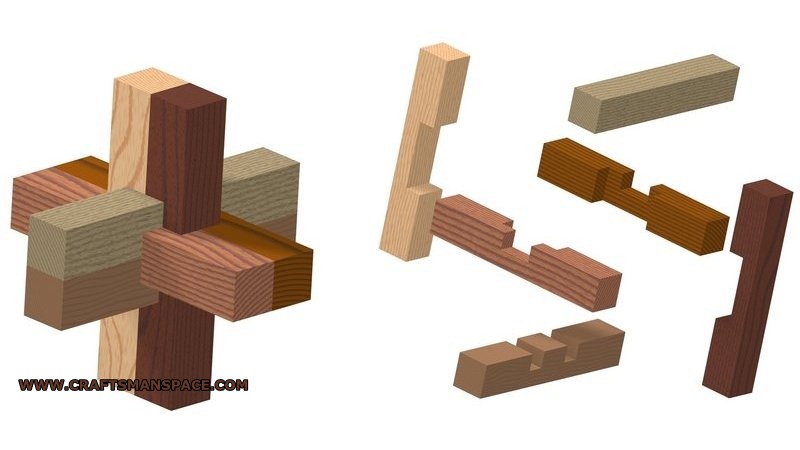 You can see other versions of this puzzle on Jim Storer's site.

The other four pieces are from the "Diabolical Cube". It was described in the 1893 book Puzzles Old and New by Prof Hoffmann. The puzzle has 6 pieces of sizes 2, 3, 4, 5, 6, and 7. You are missing the pieces of size 5 and 7. This site has the following nice picture of the pieces: 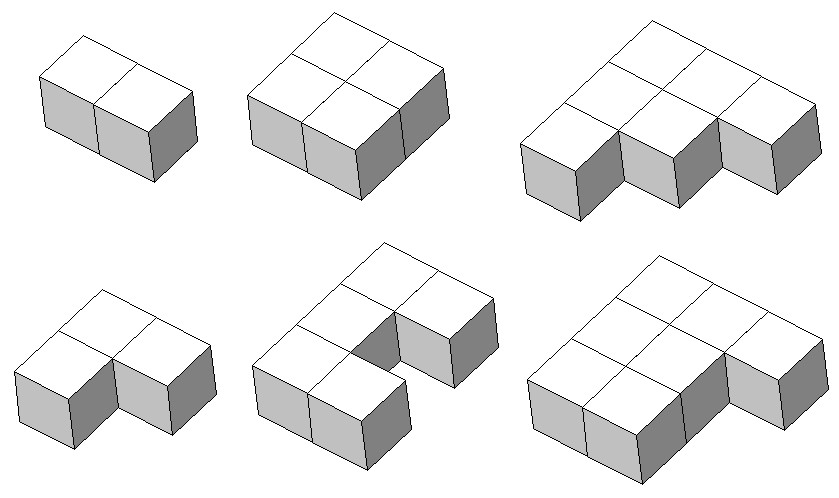 Taking the smallest indigo piece, on the left, to be 2 units, the volume of the eight pieces is 24. So to make a solid cube of volume 27 units, there would either be a piece missing (volume 3) or there is a cavity inside after the manipulation of pieces.

Can it be an interlocking puzzle?
Let's consider the largest piece, the red 6-unit one on the right.
There are two positions where it can go (subject to reflection and rotation):
a) A face. Clearly there is no way that piece can be gripped or trapped by another.
b) A centre slice. Now it does seem possible (somehow), because of the U-shaped pieces.

With b) let's consider how the next largest piece, the square yellow 4-unit one, can fit.
There are three positions where it can go (subject to reflection and rotation):
c) Flat against the first piece. This puts it on a cube face, where it can't be trapped.
d) In an angle of the first piece. This too puts it on a face of the cube.
e) Ditto, but offset by half a unit. It's possible for this to be gripped by a U-piece.

With e) although it is possible to grip with a U-piece, the lugs will only extend a half unit, leaving gaps that can't be filled.

The three jagged pieces in the centre of the OP's shot remind me of a wooden puzzle we had, but there were two of the yellow piece. If that is the missing piece, its volume 2 units would still leave 1 unit short of a solid cube. The two U-shaped pieces have a "tell" – you can see the markings where they have been slid against another piece, which is 1 unit wide, leaving a half unit gap between the lugs. But the only piece which could fit is the yellow jagged piece of which there is only one, where at least 2 half-size pieces are needed.

The five other regular cuboid pieces don't seem to be the same style. In the OP's pictures, they seem to stack nicely into a 3 x 3 x 2 cuboid.

So my conclusion is the same as that of @JaapScherphuisbut, and @GarethMcCaughan but for slightly different reasons: It is a mixture of two incomplete puzzles from the same manufacturer, but intended for different ages. The simple block one is for very young children, perhaps also incomplete.

Not the answer you're looking for? Browse other questions tagged mechanical-puzzles burr-puzzle or ask your own question.