These words have a remarkable form of self-symmetry:

It is astounding that @GarethMcCaughan solved this puzzle with so little information. I was fully prepared to drop successive hints for days until someone eventually solved it!

I was not only curious to see if anyone could solve it, but I was especially interested to see how they would explain the answer to a general audience. Again, I think Gareth's explanation is as clear and efficient as can be.

Here is more discussion (as well as a cool visual) for those who are not mathematically inclined:

I was exploring what happens when you take every other letter in a word, every third letter, every fourth letter, every fifth letter, etc. Of course, you quickly reach the end of the word, so in order to keep it fun and use all the letters, you have to wrap around to the beginning again. Like Pac-Man.

And that's about it. There aren't many other interesting examples, other than very short words. I figured it wouldn't make a very challenging puzzle.

But then I saw something unexpected and fascinating: There are over 100 words that yield themselves again! And the longest of these words are 12 letters long, giving solvers plenty to work with in an enigmatic puzzle.

It is particularly delightful because you get the same word back again, but the letters are now in a different order! Only, you can't tell that they've been rearranged.

If you're a visual person, you might appreciate this graphical representation: 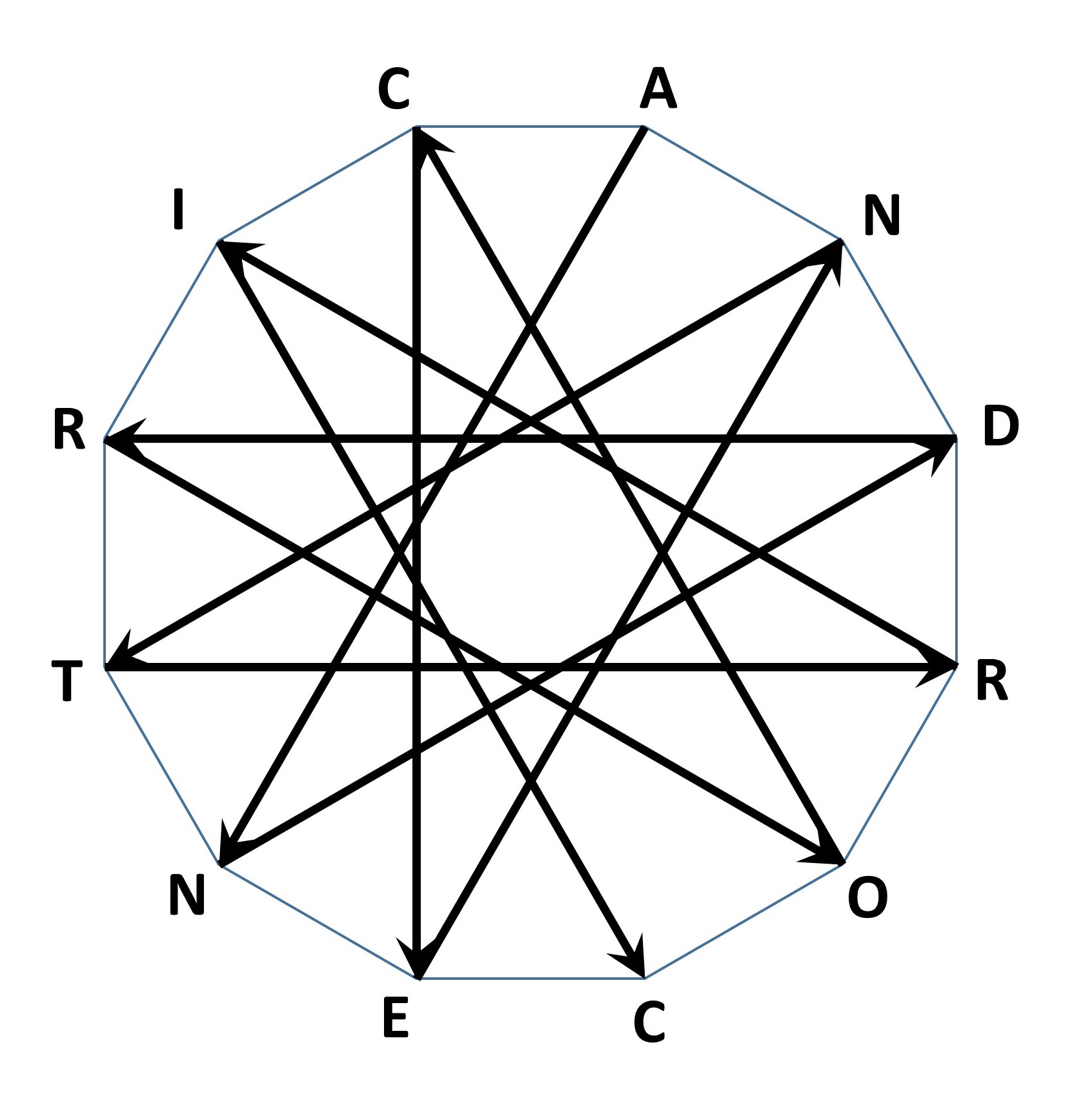 As Gareth pointed out, for each of the 12-letter words I listed, it happens that you need to take every seventh letter. But there's no reason why this needed to be so. It could just as easily have been every fifth letter, for example.

(But it wouldn't work to take every third or fourth or sixth letter. To say more gets us deep into modular arithmetic, congruence classes, relatively prime pairs...)

Each word can be

reproduced by taking its letters in a different sequence of the form $(a+bn \textrm{ mod } 12)$. So e.g., if you start at the beginning of ANDROCENTRIC and take steps of size 7, wrapping in the obvious way, you get the word ANDROCENTRIC again, and likewise for RESETTLEMENT; if you start at the other C in CONDESCENDED and take steps of size 7, you get CONDESCENDED again; same for EXTRATEXTUAL and (second S) SUBMERSIBLES.

So as it happens

the step is always 7 letters; prima facie it could have been 5 instead. (Or 11, but that would be kinda boring. Or 1, which would have been really boring.) Curiously, there seem to be no examples with step 5, at least in the wordlist I just checked, but there are quite a few with step 7. More examples: BATHYSCAPHES, TARAMASALATA, INTERMIXTURE. The others in my wordlist are all either very obscure (CRANIOCLASIS, METASOMATISM, PALMOSPASMUS) or reduplications like HUGGERMUGGER and SHILLYSHALLY.

In case the above isn't enough to make it obvious,

the "modulus" in the title refers to the "mod 12" wraparound used.

This property is closely related to the one described in hexomino's answer, and for actual English words I believe it is equivalent. Proof:

Not sure if it's the whole answer but, in each word,

It's possible to blank out either the odd or even numbered letters and get a repeating pattern (a group of three letters repeated).

There is a 'self-symmetrical' pattern which exactly fits 4 of the 5 clues, and only fails on the 5th by a single letter:

The only exception is EXTRATEXTUAL:

10
Largest crossword puzzles without blanks or blockers
7
Add Letters to the Solutions
9
I'm a little confused
5
A Ten letter Word
33
I am a car. What is the car?
5
Word list: 2 consonants 2 vowels
4
Holiday cookies word attrition [computers welcome]
26
Anagram holiday
10
Wordplay addition paradox
7
Is there a list of words that will enable the second player in two-player Ghost to always win?