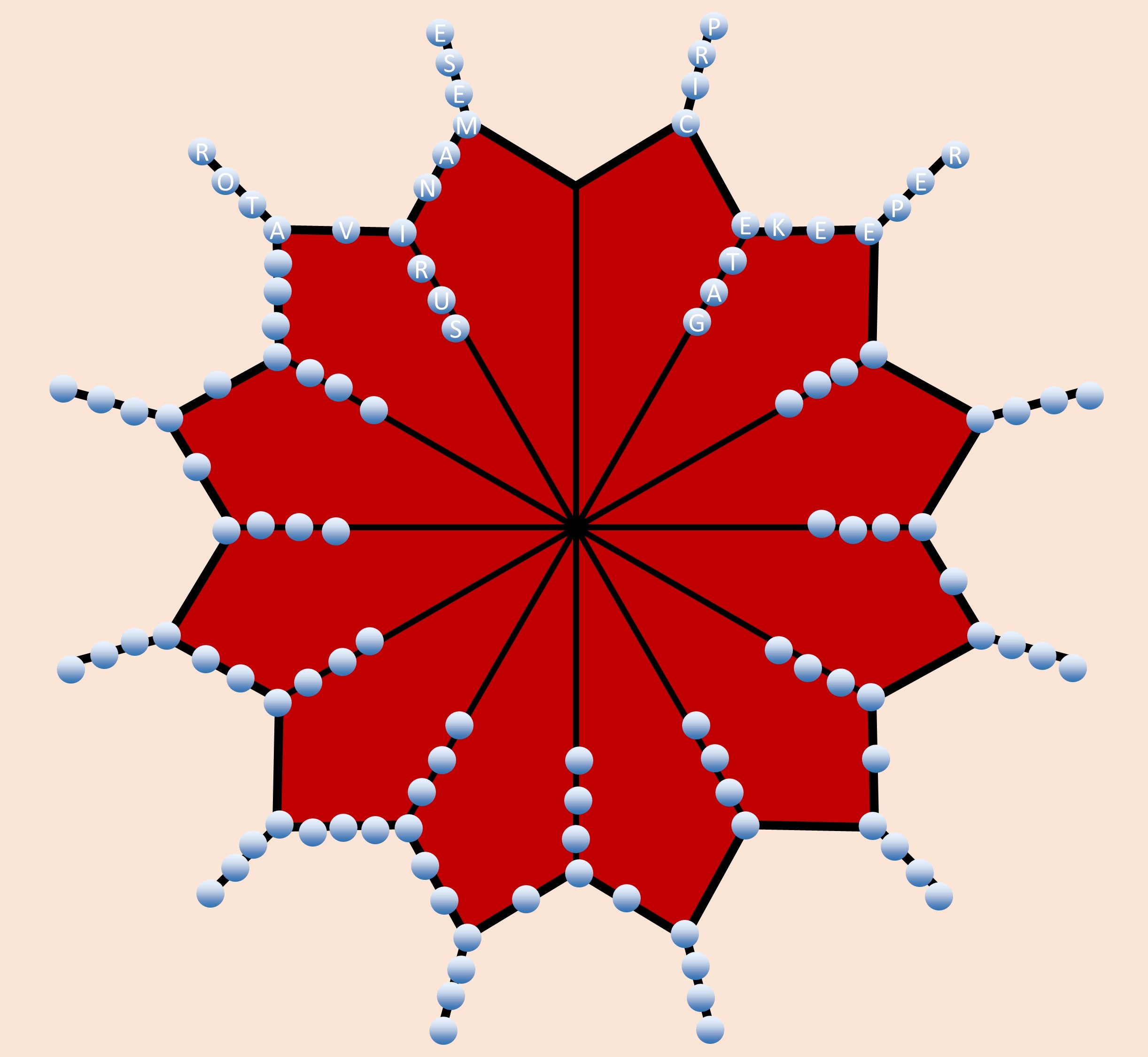 If you squint, you might be able to see letters in the reflections of some of the dew drops. Those will help get you started.

In this puzzle, the adventure begins just after 12 o'clock and the direction of movement is always clockwise, but the words alternate between reading inward and reading outward.

Starting at the tip of the petal just after 12 o'clock, you should see the word PRICETAG heading inward and doing a dogleg bend down the crease at 1 o'clock.

Then, proceeding from there and read outward to the tip of the next petal (always tending in a clockwise direction around the flower) you should see the word GATEKEEPER.

The next word reads inward again, beginning with the four letters R-E-P-E and then four more letters down the 2 o'clock crease. You must complete the word by filling in those last four letters. So, you're looking for a word that looks like REPE _ _ _ _.

The final two words, ROTAVIRUS and SURINAMESE are already filled in.

BTW, don't worry if the words ROTAVIRUS and SURINAMESE seem unfamiliar. All the words that you must fill in are much more well-known.

It would be more efficient to work inward from both ends and then intersect in the middle, and/or to turn the list of words into a map from first 4 letters + length to corresponding words -- but computer time is cheap and simple code has fewer bugs.

(I have in fact implemented the second of those. It does make things way faster.)

I have three word-lists readily to hand on my computer, of different sizes. With the smaller two, or indeed with the union of the smaller two, no solutions were found. I assume they're missing some "ordinary" words. With the biggest, after maybe 10 minutes of grinding (I didn't actually time it so that might be way off) it finds 216 solutions. The one with the simplest words (measured by, first of all, how many are in my smallest wordlist, then by how many are in the second one) still has quite a number of obscurities in it:

This one scores a little worse by my metric but seems maybe less obscure; only one word in it gives me pause:

All the solutions my computer finds contain at least one of the following words, the last of which I think isn't even a word:

I'm not very happy with any of these, so the next question is what words are missing from my list...

So, I looked at all the words in solutions found by my program, and reclassified some of them that were inexplicably-to-me omitted from the smaller word lists, and added to the large list everything that was in the smaller ones. The best solution found is still that last one, except that maybe

The same list of inevitable obscurities applies to the solutions I found. I suspect there are still some holes in my lists.

Not the answer you're looking for? Browse other questions tagged word wordplay word-ladder or ask your own question.

11
Dead Letter Drops
5
Word list: 2 consonants 2 vowels
16
Nested word series [humans only]
30
Uh oh, the propeller fell off
33
The cat exchanges places with a drawing of the cat
11
Don't look back, crazy clown
8
A chain of words 2
3
A chain of words 3
3
Word Wander - Connect the Words
9
Yet I am lovable