"If you're worthy, the secret is found within you," the wise old lady had told you before you had entered the villain's lair. When the townspeople had told you to seek her out for advice, you thought that it would actually be helpful. Now it's just pounding through your head as you enter the deepest room in the lair.

"Hello," you hear in the villain's voice. You panic, because you thought the villain wouldn't be here at this time. He's not. It's a voice recording. "Sit down, and let's play chess for a while."

A table in the center of the room contains a chessboard, although the position set up on it is very unusual. 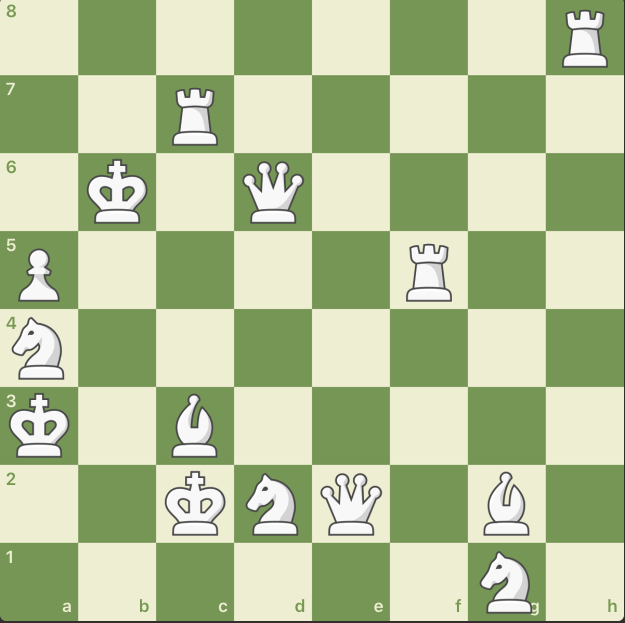 After looking at the chessboard for a little while, you notice words burnt into the side of it:

WHEREVER YOU ARE, YOU ARE ALWAYS ONE STEP BEHIND.

You know the villain is a big fan of codes and ciphers, so you know the chessboard probably helps decode something. What it could be, you have no idea.

You peer through the room's sole window into the adjoining room, where you get a nice view of a gigantic laser, that is almost charged and ready to fire.

"There is now one hour until fire." A robotic voice resonates through the room.

You don't have a second to lose. You grab the villain's laptop and navigate to the application you know will have the ability to shut down the laser.

You navigate to the shutdown option, and are greeted by a classic ENTER PASSCODE screen with room for four characters.

"There are now 55 minutes until fire," the robotic voice says again.

Can you figure out the passcode in time using all the information you've been given?

(Note: This puzzle has the chess tag because it does in fact require minimal chess knowledge. Happy puzzling!)

1. You realize that the villain has said he's especially fond of Vigenere ciphers, especially one where the key and cipher text are the same length. And isn't there a correlation between the number of pieces on the chessboard and another piece of information you've been given?
2. The secret is literally ‘found within you’.
3. There's more than 1 layer of vigenere. And aren't the files of a chessboard named after letters?
4. Isn't there a way to represent chess pieces as letters? And how could 'one step behind' refer to vigenere?

1) Using foundwithinyou as a ciphertext and hcbdafaaccdegg as a Vigenere key (the files of the chess pieces if you search top to bottom, left to right), you get mqvqdbitjkqcua.

2) Using mqvqdbitjkqcua as a ciphertext and rrkqprnkbknqbn as the key (the piece names in the same order as before), you get dhfgssvdkudsvn.

3) Since we are "one step behind", rotate the letters of dhfgssvdkudsvn forward by one letter. This gives eighttwelvetwo or "eight twelve two" (matching the word lengths in "found within you"). Thus the password is 8122.

The pieces that are not protected in order are the King on C1, Queen on D6, Rook on F5, and Knight on G1. Therefore, the Cipher is KQRK, and the key is CDFG

Not the answer you're looking for? Browse other questions tagged cipher story chess or ask your own question.