You guys have proven to be quite capable chess detectives.
So here is one more mystery for you to solve:

What was White's last move? 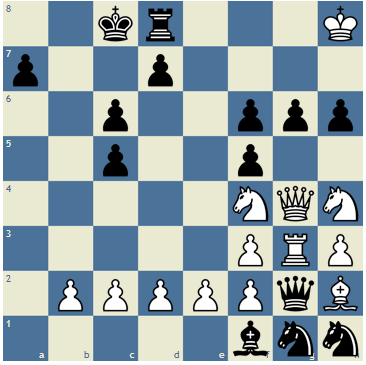 In the position shown,

white is in check, so the last move must have been made by black. The only positions the rook could have moved from already have white in check, and there's nothing that can have made a discovery, so black's only possible last move was to castle.

black can't have moved anything other than a pawn -- the K and R can't have moved because that would have prevented castling, and the other pieces have nowhere to move from. Again it's not clear how to narrow this down further, so let's look at some other things.

has lost the KB, the KR, and nothing else. (And has promoted no pawns.) White captured something on f3; it can't have been the (dark-squared) KB, so it must have been the KR. How did it get out? Not via e8 because the king hasn't moved, hence via f7. So the f-pawn moved either to f6 or to f5 before that rook escaped. We could have had f7-f5, then R-f8-f6-out, then e7xf6; or f6, then R-f7 by some route, then e6xf5. I think that's all the possibilities but haven't checked super-carefully. Once again it's not obvious how to proceed so let's change tack again.

has lost one pawn, a light-squared bishop, and a rook. The Bh2 can't have escaped from behind b2 and d2, so in fact it's promoted. So the a-pawn captured the BKB on b4 or b6 and promoted on b8 to the bishop that now stands on h2; and black has captured one white bishop of each sort and a white rook. At least two of those captures were made by pawns. The WQB never left c1 so wasn't captured by a pawn; so black pawns captured (on the c and f files) the WKB and one white rook. What else? The BQB must have reached f1 via h3, so we had g2xf3 before h6. The BN on g1 must also have got there by that route before h3 was played. Also in that window: the WKB's escape from the back rank, heading for eventual capture on c6 or f5. Continuing to think about the order in which things happened: before the WP could promote, B must have captured on c6 or c5 with his b-pawn. Only after b7xc6 or b7-b6 can the BBc8 have escaped (to get eventually to its current location on f1).

So we have the following sequence of events.

this means that the WKB was captured on f6, not f5, because by the time it was anywhere capturable black had already either made a kingside pawn capture or put a pawn on f5 without capturing. So at some point after (a), black played b7xc6 capturing that bishop (and now note that (b) above must have happened after that); and then at some point after that the white a-pawn made its way down to b8 and became the bishop now on h2.

We still haven't figured out

exactly what happened on the kingside. A white rook was captured there, either on f6 or on f5. Before that could happen, either the white a-pawn must have reached the fourth rank or gxf3 must have been played. And, of course, at some point the WK somehow made its way to h8. And, also, at some point the BKB got out in order to be captured by the white a-pawn on either b4 or b6.

black played f5 before capturing on f6. The BKR must have escaped between those two occurrences. For this to be possible, the pawn on g7 must have moved, either to let the BKR past or to get the BKB off f8 or both. At this point, we have black pawns on f5 and g6, which means that once white has played gxf3 there is no way for the WKB to escape from the kingside in order to be captured on c6. So this won't do, and in fact black played e7xf6 before the BKR escaped. This capture, as we saw above, was of a WR. It can't have been the KR because at this point gxf3 hadn't been played, so the WKR couldn't escape "upward" (because the pawns were still in the way) nor "leftward" (because the Bf1 was still in the way). So it was the QR, so at this point the white a-pawn had already reached the fourth rank at least. I don't yet see any way to tell whether it went to a4 or played a3xb4 (in which case the BKB must have got out already, presumably via g7).

before the BKR can get out to be captured on f3, black still needs to play f5 and f6. So is the WKB's situation any better? Yes, but only just. It needs to get out via g6! From there it can't reach the queenside via f7 because then it would be checking the BK, which mustn't move, so in fact it must go to g6, then h7, then g8, and then over to its eventual doom on c6. So we have h6 before g6.

how the WK got to his current position. He can't have gone via d7, e7, f7, all of which were attacked by the BK until the move black only just made. So the WK got in via g7 or h7. And we've just seen that black played h6 before g6, so in fact the WK went to g6, then h7, then h8.

We must now be quite close to having nailed down

So far, so good. But black

is still really short of moves. So far we know that the last few moves were WHITE-MOVE-A g6; WHITE-MOVE-B 0-0-0. Whatever those last two white moves were, somehow there must be some possible black move before WHITE-MOVE-A, and it must be a piece move because all the considerations above surrounding the other black pawns still apply. The only way to do that is if WHITE-MOVE-B is a queen move and WHITE-MOVE-A is Rg4-g3.

WHITE-MOVE-B can't have been Qh5-g4 because on h5 the queen would have been giving check to the black king.

Reasoning: The white king has to have moved to h8 before the black king castled, all other move would have the king move into the check or remain in check without white doing anything to block it.

The moves leading up to this solution will be posted soon

I have a correction to the solutions submitted. I need to point out that there are two possible final moves, since there could have been a discovered check. The final two moves could have been either

I am sorry that I do not have the motivation to type the lengthy details of reasoning and sample games to give a complete solution. I hope that the early submissions cover most of them.

This is a wonderful composition.

I tried to prove

black could not have castled.

And though I came close, it fails. I leave the analysis here for anyone else to use as reference

First, the white bishop on h2 must be a promoted pawn, since it could not be the bishop from c1 (couldn't have gotten out).


Second, there were only two black pawn captures. There are 3 white pieces missing (2 bishops and a rook), but one of the bishops was captured on c1, thus not by a pawn. One of the pawn captures was a rook and one was a white-square bishop on either c6 or f5


Third, the pawn on f3 must have captured from g2 before the Bishop on f1 could get out and get captured by a pawn. This capture must have been the black rook, since the missing black pieces are a black-squared bishop, and a rook

Now, that doesn't help determine what did happen, but I think it shows what didn't!

16
Can white's rook and knight without moving white king force stalemate?
14
Can you save white in this chess position?
18
Megan mated by a king move
11
Loser Chess : another proof game
7
An Atomic Proof Game
4
Fantastic Foxhole Failures
4
That Ain’t Rght... 1# (Definitely!)
7
What was the last move made in this game?
9
Chess Construction Challenge #6: The One Move Royale