Five 5-cent coins touching each other

Is it possible to position five 5-cent coins so that each coin touches the other four coins?

The answer is: it's complicated!

Obviously I didn't come up with this, but the method you'll find online is an arrangement like this: 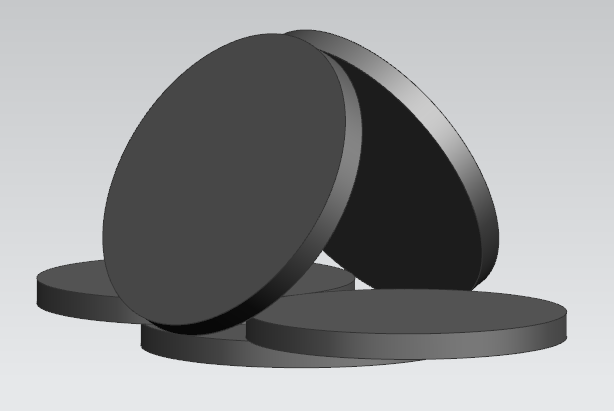 I modeled these coins as perfect cylinders with a thickness of exactly 8% of their diameter, and all are identical. This is important because should the coins be only a tiny amount thicker, they could not touch using this (or probably any other) technique. Conversely there seems to be no limit to how thin the coins could be, as the "roof" can be adjusted until all are touching.

The problem specified 5 cent coins... and there are a bunch to choose from. The Euro coin is between 7% and 8% thickness/diameter so it should work fine. The American nickel is a hefty 9.2%, and thus will not work. The glorious Canadian Mint claims a thickness at 8.3% of their nickel's diameter, which is sadly just over the critical thickness.

Those numbers I got from Wikipedia, but I'm an Engineer by trade and I don't trust a website where any coin conspiracy theorist can edit the data. I have a 2012 American nickel and I found it to be of questionable manufacture. The thickness was not consistent, probably owing to the fact that the image of Jefferson favors the left half of the coin. Even this inconsistency probably isn't enough to reasonably claim 5 American coins could touch each other, however.

Canadian coins are nearly thin enough, but their manufacture seems better and even the edges are crisp unlike the American coins. The 1973 Canadian nickel I have was actually a little thinner than the "book value", it was right at the acceptable 8% mark. I don't have more, but I don't think its a stretch to say there could be more like it.

So sum it up: Americans are fat, Europeans are thin, and Canadians... well you could probably find 5 decent ones without looking too hard.

It's an old puzzle...The solution can be found here:

Place one coin on the ground, then put 2 more on it, so that they are meeting in the middle. The other 2 coins must then be placed in the nascent slots, like a rooftop

I think I have it:

Stack two of the coins and with the rest 3 make a pyramid and place it on the two others and make sure that the pyramid coins touch both of the 2 stacked coins.
Here is a photo of it The photo is not completely accurate, as it uses pennies and quarters and the pyramid of coins doesn't touch the first coin on the ground. Edit: just tried with real nickels and tape, works, but is a little hard to tape :)

28
How do I arrange pencils so they all touch each other?
14
Touching coins flat on a table
6
Where are the extra coins?
14
The five problems of the six domino tiles
7
Minimal 2D pattern for domino tiles where each tile touches three others
2
Four touching circles
0
Number of turns a coin makes going around some other coins
4
Cubes touching all other cubes