Checkmate in 1 on a Tangled Board

Lots of pieces are tangled here.
Can you find mate in one? 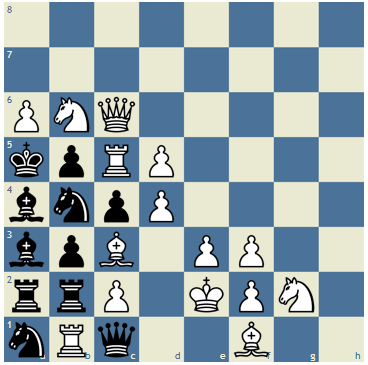 Small hint to guide you in the right way:

If you look at this position as a normal chess puzzle, the answer might be easy. However, notice the retrograde-analysis tag. To fully solve the mystery in this position you will need to dig deeper!

Since the puzzle turned out to be way hairier than expected, my earlier answer got quite messy and hard to follow, so here's a complete rewrite. It's still very clunky, but I hope it's much clearer than the earlier one. Also, there's an executive summary at the end, if you are not interested in all the gory details.

First, we'll need to make some general observations. If they seem to be overly complex, try to hang on: every single one of these will turn out to be important. (Yes, really!)

Observation 1: White has 15 pieces on board, and black has a doubled pawn on the b-file, and a pawn on the c-file.

Consequence 1: The only white piece that was captured was taken by black's a-pawn. No other white pieces were taken.

Consequence 1.1: The five missing black pawns were either taken or promoted on the file they started on.

Observation 2: Assuming minimal captures, white's pawns are all identifiable, up to the pawns on d-file being interchangeable. The only missing white pawn is the h-pawn.

Consequence 2: The piece taken by black's a-pawn was white's promoted h-pawn. (Or another white piece, and the h-pawn was promoted to replace it. Since it doesn't matter in which order the capturing and the promoting happened, I'll just keep talking about "capturing promoted pawns" when I mean both of these possibilities.)

Summary so far: Out of the 5 missing black pawns, we have accounted for 2 captured as pawns (on d and f files) and one captured promoted on the c-file.

Consequence 5: no matter which of the three cases occurred, black lost one promoted/promotable pawn.

Observation 6: black's e-pawn was always blocked from promoting. The above cases have accounted for all the other black pieces, so it was impossible for white's d- and e-pawns to have swapped places by capturing, which could have opened the way for the e-pawn to promote.

And now, FINALLY, we are ready to tackle the puzzle!

could be the solution. Sure, why not. Let's check that the position could have been reached by legal play, though!

The black pieces are pretty much clumped up, so we can list all black's possible last moves:

If black's last move was Nb4, then it follows that white's previous move must have been Bxc3+. If not, then the white bishop would have been giving check on white's turn, which is of course illegal. But this poses a problem: there cannot have been anything on c3 for the white bishop to capture, because above we have accounted for all promoted black pieces (see "consequence 6"), and the only pawn that could have reached that square is still on c4.

From all this, is follows that

It cannot be white's turn!

Well, where is the mate then?

Given the information from above, we can try to figure out white's last move. It must be something that enables a new previous move for black, since if it doesn't, we know from above that black has no moves.

Let's explore the four possibilities for this case:

Possibility 1: White's last move was Nb6. This enables a pawn move for black's previous move, but then the white move before that is impossible; there's no way the white rook can be giving check:

Possibility 2: White moved something that enabled the black queen to move last

Possibility 4: White moved something that enabled the black knight to move last

This looks promising, but there's still the problem of finding a suitable move.

This enables a move for the black knight, because it opens up a new previous move for white: now the bishop can have come from somewhere that's not on the black king's diagonal.

In other words, three half-moves ago, the board must have looked like this: 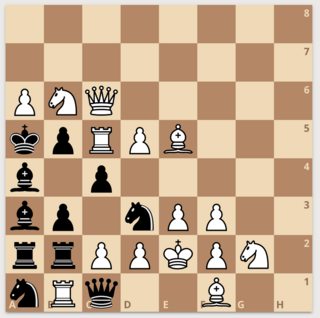 From there, the only way to reach the current position is

Which finally allows for the long sought after mate in one:

Phew! What a ride!

At the first glance, it looks like 1. Nxc4#might be the answer. However, a very complicated analysis proves that it cannot be white's turn to play. Starting again with the assumption that it's blacks turn, another round of analysis proves that white's last move can only have been "pawn from d2 to d4". This enables black's c-pawn to capture en passant, which checkmates the white king.

I may have missed some specific variations, so please drop a comment if you notice one. And thanks again, OP, for another brilliant puzzle!

To add on to Glorfindel's answer,

pawn b5 is pinned

It is black's turn to move. The only black piece for which there are free fields it could have moved from in the previous half move is the Queen. However, on all candidate origins the queen would have been checking the white King. In such a position, white must move (its King out of check) or loses by checkmate.

No mate opportunities for black under null move heuristics. Assuming that black had moved in the last half move, the legal moves that would put white into check are: - capture c2 with either Queen or Rook. This can be countered by Bd2. - Move the Queen to d2 or d-f1. The white Rook or King would capture in turn

Conclusion: the preceding half move of white must have created a move opportunity not available under null move heuristics. That can only be a pawn move allowing for capture an passant. The only white pawn on rank 4 is on file d.