Following on my previous puzzle that was well received (here).
Note that this one is a lot shorter / easier, so feel free to participate! 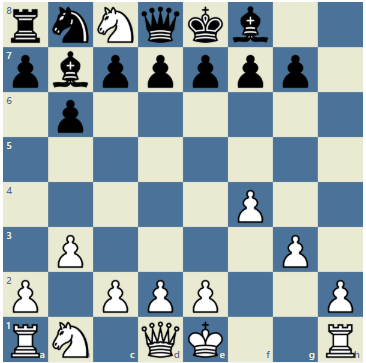 The white knight on c8 can't have arrived from a7 or e7, since the pawns there are still in the same place. d6 doesn't work either, as from there it would give check. There is some wiggle room for the king if the queen is on c8, but the knight needs to be on c8 already when the king moves to e8, and then the queen can't reach d8 anymore.

The white knight arrived there from b6 before Black played b7-b6, so it captured the light-colored bishop and the one on b7 is a promoted h-pawn.

This could only happen

when it promoted on f1 or h1; since White has 8 pawns, it needs to have captured twice to get to f1 or h1. But one of those captures must have been White's dark-colored bishop, so h7-h5-h4-h3xg2xf1=B is not possible. It can't reach g2 in another way, so something like h7-h5xg4-g3xf2-f1=B must have happened, but that is only possible if the white king was temporarily somewhere else on the board; it must have moved and White cannot castle anymore. After a hint by the OP, I found a way to reach g2 while capturing on a dark square:

must have captured as well; the pawn on f4 is the g-pawn and it captured Black's king's rook or knight to make way for the black pawn; after it reached g2, the white f-pawn captured the other piece on g3.

The game can be replayed here.

6
Checkmate all the kings #4
2
The Torn Score Sheet- #2
10
Copycat Chess, Again
5
Three free moves, three more moves, mate
13
Reconstruct a game of Loser Chess
12
A Chess Lock Puzzle?
11
Loser Chess : another proof game
31
There is only s̶i̶x̶t̶y one place he can be
76
Can White Castle?
16
Can White Castle? #3