I found this nice little problem on Tim Krabbe's website the other day. I found it so unique and beautiful, that I felt compelled to share it here as a puzzle to be solved. Please do not use a computer and do please don't look up the answer! Try to use your own brain power!

It's White to move and reach a winning postion in 7 moves. 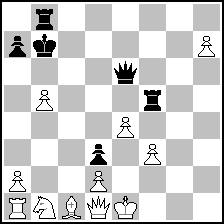 Given the poster's comment confirming the first four moves:

I believe the continuation is as follows, for the following reasons.

7
Fill in the boxes to get the right equation v2
7
The Chessboard Exhibition
15
Tht Aain’t Right… #2
3
That Ain’t Right… #3
2
The Sea Snake's Slithering Problem
2
That Ain't Right… #4
3
Back in time, in my time, all the time
7
The Rambling Monster
7
The Newest Cycle