Is this 3d Sudoku possible?

I was looking at images of 3d Sudoku's on Bing, because I was looking for a $9\times9\times9$ Sudoku, where each horizontal, vertical left-right and vertical top-bottom plane was also a Sudoku.

QUESTION: Is a $9\times9\times9$ Sudoku grid with every plane a 2d Sudoku possible?

The closest image relating to this question that I found was: 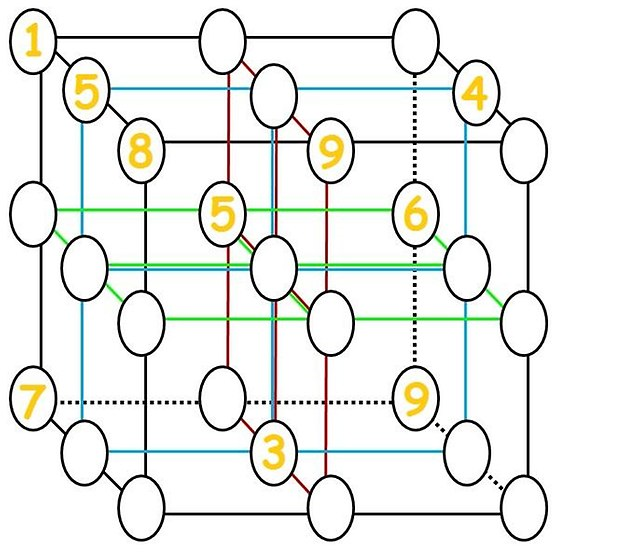 , (supposedly from Tokfm but I couldn't find it there) which I solved (see Addendum).

The question is NOT how to solve the $3\times3\times3$ image - this is fairy easy:

If two digits appear, then the third follows, because the first two occupy 2 coordinates in each of the x-y, x-z and y-z planes, leaving only one possible space (for example the two 5's are ({back,middle},{left, middle},{top, middle}), so the final 5 is (front, right, bottom)).

We can also see that the 6 on the top plane is in the middle, as the 6 already present operates along two of the plane orthogonal to the top plane.

but is asking for a proof/counter-example that a $9\times9\times9$ Sudoku grid with every plane a 2d Sudoku exists or not.

The comments contain more information as to what properties such a number grid would have.

Yes, it is possible

You can use the solution to the $3 \times 3 \times 3$ puzzle to generate a solution.

Determine the solution to the $3 \times 3 \times 3$ grid.
Moti has already done this but here it is reproduced. 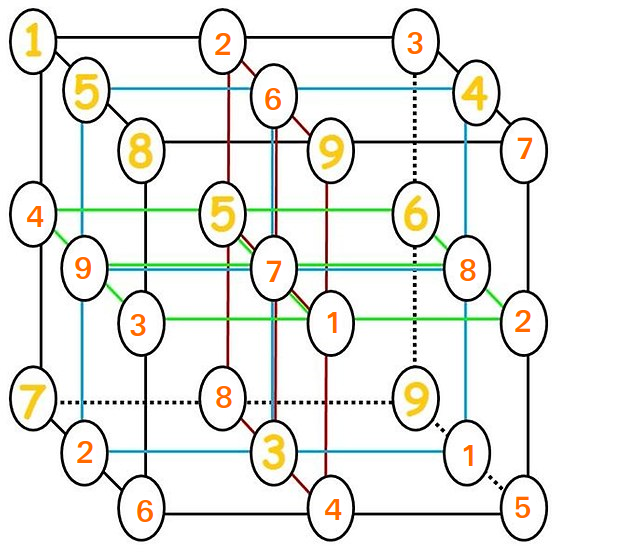 Generate a $3 \times 3 \times 9$ grid by stacking this $3 \times 3 \times 3$ block on top of two more such block whose vertical-row planes are permutations of the original. If we read this grid from the top layer down (left to right), this looks as follows


Notice that to get the 4th layer, for example, I've just rotated the rows in the 1st layer, same for 5th and 2nd, etc.

Using this $9 \times 3 \times 9$ grid generate the $9 \times 9 \times 9$ Sudoku with the new blocks being formed by permuting the horizontal planes of the original blocks, in groups of three, and being placed adjacent. I will represent the full solution in three parts (as it is quite big):

Top three layers (first on the left, second in middle, third on the right)

Not the answer you're looking for? Browse other questions tagged optimization puzzle-creation sudoku three-dimensional or ask your own question.

14
Write digits 1 to 9 in the table, each pointing to next 3x3 grid
13
Magic Squares in Sudoku Grids
4
Engineering drawing put to some good use
21
These alien safes have no end
21
Sudoku in the third dimension (3D Sudoku)
10
No Numbers Sudoku: The Ball of Queens
6
Reassemble NaNoWriMo
14
Pento-Doku: Pentominous + Sudoku
3
Universal bisectors
20
Escape from Sudoku!