Solve the crossword then slide the blocks to create another configuration with eight new words. 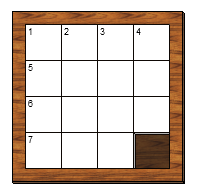 The solution to the crossword is: 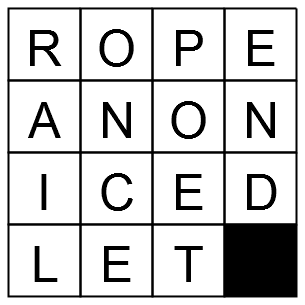 And this can be arranged as: 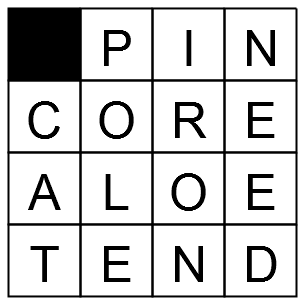 After several failed attempts, I started with P?LE and P?N in the upper left, and TEND along the bottom: the first two because they could be filled with many vowels (giving me freedom to move the vowels around if necessary), and the latter because all of those letters were very common as ending letters. Next came ALOE, because I'd need vowels in the middle-right area, and then IRON was the best word ending in ON. After that, I placed CAT/CERO/NOED, and was disappointed that PELE was a proper noun, not a word (and CERO was obscure too)... then didn't realize until the next day that I could just swap the E and O to fix it.

But is this solvable as a 15-puzzle?

Yes: The 15-puzzle is solvable in exactly half of its positions, based on parity of swaps. If you can't get to a particular position, you can always get to that position with any two tiles of your choice swapped. So, if your correspondence of numbers to letters fails, simply swap two of the tiles with the same letter and it will be solvable.

Not the answer you're looking for? Browse other questions tagged no-computers crosswords mechanical-puzzles sliding-blocks or ask your own question.

28
Want to See My Crossword? Too Bad!
10
Crossword With Friends
12
Five letter words at cross purposes
47
A crossword so simple, it practically solves itself
5
Challenge : Create a star shaped crosswords (Smaller numbers of distinct letters wins !)
14
Monday's Unmatched Donimoes Problem
5
Techniques for solving row & column sliding puzzles
15
The words go marching round and round
35
Self-contained math crossword with if-then-else clues
12
AnaCross: A crossword made of anagrams