Where is the White King? [duplicate]

Ask Question
Asked 7 months ago
Active 7 months ago
Viewed 155 times
0
$\begingroup$
This question already has answers here:
There is only s̶i̶x̶t̶y one place he can be (2 answers)
Closed 8 months ago.

I recently stumbled upon this puzzle on a known video platform. Apparently it's from the cover of an old book named "The Chess Mysteries of the Arabian Knights". 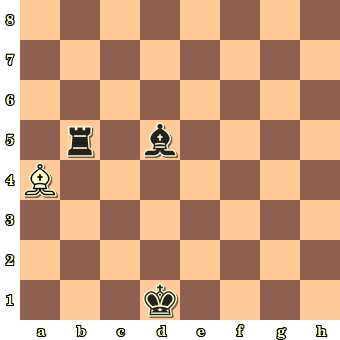 The white king made himself invisible. Where is he?

Of course simply guessing is not enough. You must explain your solution, and it should contain at least the last move for both sides.

You may assume the following:

The white king is on

and the last few moves were

Let's consider these possibilities in order.

Suppose the WK is on b3. There's no possible last black move that can have created both checks on the WK, so this isn't possible.

If that move wasn't a capture then we have exactly the same position we just ruled out. So the WK has just moved from b3, necessarily to a3 or c3 since the other squares adjacent to b3 are either occupied or attacked, capturing a black piece. On a3 or c3 that piece can't be obstructing either of the two checks the WK is in, so it must have moved from somewhere that did.

This is no good yet, because

we need black's last move to have created two checks, so black's move must also have removed a white piece that was blocking a check, without recreating that block. There's only one way to do that! Black must have made a capture en passant, and there's only one possible such capture.

31
There is only s̶i̶x̶t̶y one place he can be
32
A Masterpiece: A mirror or an ABC?