Inspired by some great weighing puzzles here (This being one of my favorites), I just made another weighing puzzle - I'm not quite sure how difficult or easy this one is.

Using a balance large enough to fit any number of coins in either pan, what is the minimum number of weighings necessary to figure out which of the coins are fake and which of the fake coins is the lighter one?

For (Update: fixed mistake, thanks to comments):

Two imbalances: relabel the coins so A>B, C>D. The options are now ACB, ACD, ACI, ACJ, AID, AJD, CIB, CJB. Weigh I/J and then AB/CD to determine which of the 8 options is the solution.

Three imbalances: relabel the coins so A>B, C>D, E>F. The only options are ACF, AED, or CEB. Weigh A/C to determine which.

at most 6 weighings are required.

Not a solution but the theoretical minimum weighings required is 6. There are 360 combinations of coins. 10 locations for the smaller fake and then 2/9 locations for the larger fakes: 10*nchoosek(9,2) = 360. Each weighing provides a ternary bit of information. At a minimum, 6 weighings are sufficient to learn all fake coin locations: 3^6 = 729 > 360.

I have a method that will identify the fakes in

Weighing single coins pairwise. Do it for all the 10 coins, using a total of 5 weighings this way.

There are three possible outcomes:

Either one, two or three weighings produced an unbalanced result.

Let's handle these separately, starting with the easiest case that has

two unbalanced results. All the fakes must be among the 4 coins involved, and the heavy fakes must be those that went down. The light fake is is the lighter one of the two coins that went up, so this case takes 6 weighings in total to solve.

Next, let's handle the case with

(If you pick one coin from each balanced pair, you have "from four coins, find the heavy one", which you can solve in a couple of pretty straightforward ways.)

And finally, there could be

three unbalanced results. One of the fakes must be involved in each of them. Weighing two of the suspected heavy coins against one another will reveal which kind of fakes caused the imbalances: If both were heavy fakes, the scale balances; otherwise the lighter coin is regular, and its pair was the light fake. So in this case, we were able to do with 6 weighings in total. (I originally had 7 for this, because reasons.)

Now, if only we were able to shave off one weighing from the "only 1 unbalanced" case..

Lets give it a try.

Taking 5 coins for each side:
only 3 possible combinations (left side is heavier)

Now we take 1 coin from the right side ("first pick") weighing it against all of the four remaing coins on that side individually:

After making Weighings 2-5 you have a pattern with 4 results H (Higher), L (Lower), E (Equal), ordering is not important

- EEEE the five coins must be $GGGGG$ (all genuine, done) the other five must be $HHLGG$ (it was combination 1 at Weighing 1), we have to go on with $HHLGG$

- GEEE the five coins must be $LGGGG$ (we know $L$ because it was the coin in the "greater-weighing" so we know all 5, done) , the other five must be $HHGGG$ (it was combination 2 at Weighing 1), we have to go on with $HHGGG$

- LGEE the five coins must be $HLGGG$ (we know $L$ and $H$ from the "less-weighing" and the "greater-weighing", $G$ from the "equal-weighing", the other five must be $HGGGG$ (it was combination 3 at Weighing 1), we have to go on with $HGGGG$

So go on with what is left

- Pattern EEEE, GEEE and LGEE leaves us with 5 remaining unknown coins and a known genuine coin to weigh them against individually. So with Weighings 6-9 we can determine all 5 unknown coins.

We need at most $12 weighings$ to determine all coins.

Not sure if this is optimal, but with my strategy I need at most

We use the following notation:

Here is the tactic:

Divide coins in pairs (randomly obviously).
For each pair, look if they are balanced or not.
There are only three options:

There is no way that this step takes fewer turns using this tactic because:

There is always a possibility that in our first 4 turns we find:
3xBalanced, 1xUnbalanced
In that case we cannot be sure what the 5th pair would be.

Now that we figured out which case we have, we can do this:

Case A
Take 2 pairs and balance. (turn 6)
If balanced: these are the HN pairs. The 3rd unbalanced pair must be LN. Since we know which of the pair mates is heavier, we are done.
If unbalanced: The heavier pair is HN, the other is LN, the third one not on the balance in HN. we are done.

Case C (worst case):
There is one unbalanced pair, we know that these are LN, and the lightest one is L.
One of the balanced pairs is HH.
We need to balance pairs against each other. The are four, let's say pairs i-iv. First, put i and ii together, then iii and iv. These are steps 6 and 7.
In either step 6 or 7, we get and unbalanced result. The heaviest pair consists of HH.

I can guarantee 7 weighings

As @jousle noted, there are 360 combinations that could be the final solution. "10 choose 3" times "3 choose 1" is the way I look at it. We want the balance to divide those solutions as equally as possible into smaller and smaller groups at we make our weighings.

I used a computer program to help generate these numbers, but the ideal weighing is to put 2 coins on each pan. The numbers in the chart represent how many of each combination would remain possible after the balance gave that outcome. This ideal weighing doesn't have to hold true as we progress into the later weighings, but it is the best starting point. 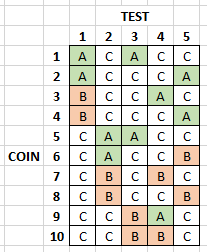 So next is to set up some tests. I know that pre-determined strategies do not typically perform as well as adaptive ones, but I'm also worried about how many branches an adaptive strategy would have. I noticed I could reasonably scramble up 5 weighings that don't have very much to do with one another. I didn't iterate on this to improve it, this is literally the first 5 tests I thought up. Note that "C" just means unused... I got used to that format in a different weighing problem.

So, when you run these 5 tests, what are you left with? I used a computer program, because this is well outside the realm of "doing things by hand". The program told me that some of the combinations became unique (meaning if that combination was the actual arrangement, then we could stop at 5 tests) but most were in groups or 2s and 3s. One group, however, was a bit bigger at 6 members. This is the worst case, specifically for this 5-test arrangement I designed.

The number on the left is the combination index so I can keep track of them. These combinations all agree in the sense that they are all possible if the 5 test outcomes are as follows: [ A < B , A < B , A > B , A = B , A = B ]. So this worst case isn't terrible, but since our balance can at best divide combinations into groups of 3, we know that we still need two more weighings to finally settle on a combination. Could a different set of 5 opening tests have done better? Maybe.

So "breaking apart" any set of 3 combinations in a single weighing is always going to be possible. Breaking up a set of 9 combinations in two weighings... that's not so easy. Based on my experience with these puzzles, it could be impossible. We only have to break apart 6, and this I strongly suspect is always possible. It certainly is in this case, here's an example of a test 6 and 7:

So I typically like to make one pan neutral first and go from there. This works out for us, because after test 6 we break the 6 remaining combinations into a group of 3, a group of 2, and a group of 1. The group of 3 is our new worst case scenario, so a simple test 7 can be devised to break apart those three. Note that we no longer need to follow the "2 coins per pan" guideline from earlier because our adaptive strategy is just better now.

So hopefully that convinces people that 7 weighings is surely good enough, with some mild adaptive effort. But could it do 6 weighings? I actually suspect this can be done, the problem is that you need to switch over to being adaptive sooner, maybe after 3 or 4 tests. That makes this problem a real monster, because suddenly we have to account for potentially dozens of nested scenarios based on what the first tests tell us. I've spent enough time on this problem already, I'm not getting into that mess

Fun problem, though. It has a different flavor to some of the ones I have played with.

Not the answer you're looking for? Browse other questions tagged mathematics strategy combinatorics weighing or ask your own question.

15
Twelve balls on a scale, where one ball is lighter and another is heavier