I had a rather odd idea today. On my own, I came up with a mate in two scheme that uses a fairy chess piece, along with a new puzzle theme. The idea is that you must figure what fairy piece is going to be used-changing a piece or by promotion-or is being used-intution based on the position and goals of the puzzle. Since this could get a bit broad, I'm limiting my usage to what can be found in the Wikipedia list of fairy chess pieces to narrow it down. I shall strive to make it not impossible to solve.

Thus, I present my original puzzle 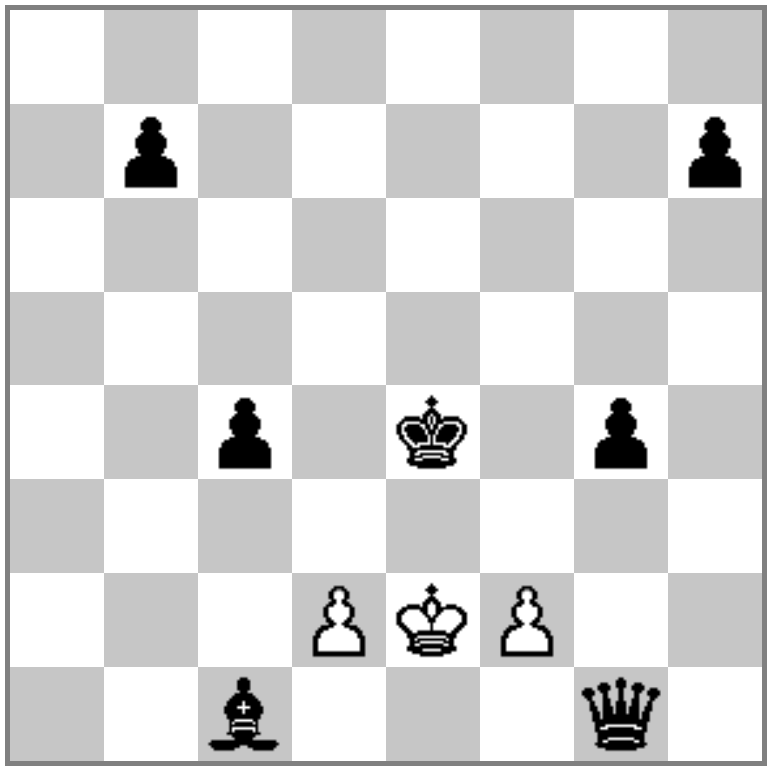 EDIT: Gareth McCaughan has noticed a flaw, so here is a fix.

The Fix: The board is from White's POV. The 7th rank black pawns, and only those black pawns, may move up onto the 8th rank to promote. All of the other pieces move normally.

It is strange, but it is nessecary to get the idea behind the puzzle out. The pawns themselves are not the solution, although they would technically count as fairy pieces.

Identify the fairy piece that will be promoted. Give an explanation for your answer. You must also solve the mate in two-there is a total of four solutions possible.

1... h8=Nightrider+
2. f4 NRxf4#
A nightrider is a fairy chess piece that moves as follows: "A nightrider moves any number of the knight's moves in the same direction. A piece in its path of the opposing color could be captured, but the nightrider could not move any further."

Of course this assumes that for some reason the white and black pawns both move upwards, as stated by the OP.

Assuming black pawns move upwards, I think promoting either pawn into a Lolcat should do the trick in one move.

33
lolcatz can haz ur infinit cheeseboard

17
Fairy Chess #1- The Mastermind
21
A Warped Chess Maze
3
A Fairy Warped Chess Maze
8
The ability-swap-circle chess
7
Halloween chess: Vampires and Zombies and Bats, oh my!
5
The Chess 24 Game
4
Chess Massacre Variants-Play Find The Fastest Way?
6
Down The Board-Selfmate In 10 Moves
8
Three-player chess on a 7x7 board
6
Chess Construction Challenge #3-The Inverse Babson