Ernie and the Calendar

I had taken an extended summer break over the Christmas New Year period but finally returned to the city at the end of January, feeling relaxed and tanned. I was looking forwards to getting back in touch with friends I hadn't seen in a while so on the following Sunday morning I dropped in on Ernie to see how things were going with him.

"First of February", I commented as I entered the workshop to find Ernie peering into a brass microscope. Ernie looked up to greet me, asked how my break had been, then requested that I tear off the January page on his calendar to get it up to date.

I was happy to assist. But as I ripped off the old page, perched on a stool in order to reach it, I noticed something rather curious. On the January page Ernie had crossed out the N in JAN (with the bright red marker pen he only used when something was "wrong"), so it now appeared as JA. I riffled through the rest of the pages and discovered that this wasn't the only alteration he had made. The last letter G was also scribbled out from AUG to leave AU. He had been even more extreme with FEB, SEP, OCT, NOV, and DEC, which had each been reduced to their first letter - F, S, O, N, and D, respectively. MAR, MAY, and JUL, had been left untouched. But curiously, for the months of April and June, he had added a letter to convert APR to APRI and JUN to JUNE.

Ernie's behavior is considered rather odd at times (by some people), but I have never found his actions to be random or haphazard or arbitrary so I knew there must be some logic behind the alterations. So, being the curious sort, I asked him why he had done this.

"Well, you know how I despise unnecessary redundancy!", Ernie began, "For example, you can distinguish January uniquely from June and July by its first two letters JA, no need for the redundant N. And similarly, February is the only month beginning with an F, so there is no need for the EB. So, I have edited the calendar by getting rid of superfluous letters."

I wasn't totally convinced, "That explains most of your changes", I replied, "but what about the extra letters in APRI and JUNE? I can't see that you need them". Ernie paused for a moment then continued. "The letters ADFJLMNOPRSUY would be enough to identify the names of the months efficiently, but by adding E and I, I can also spell out ERNIE ... and that also helped with the synesthesia." 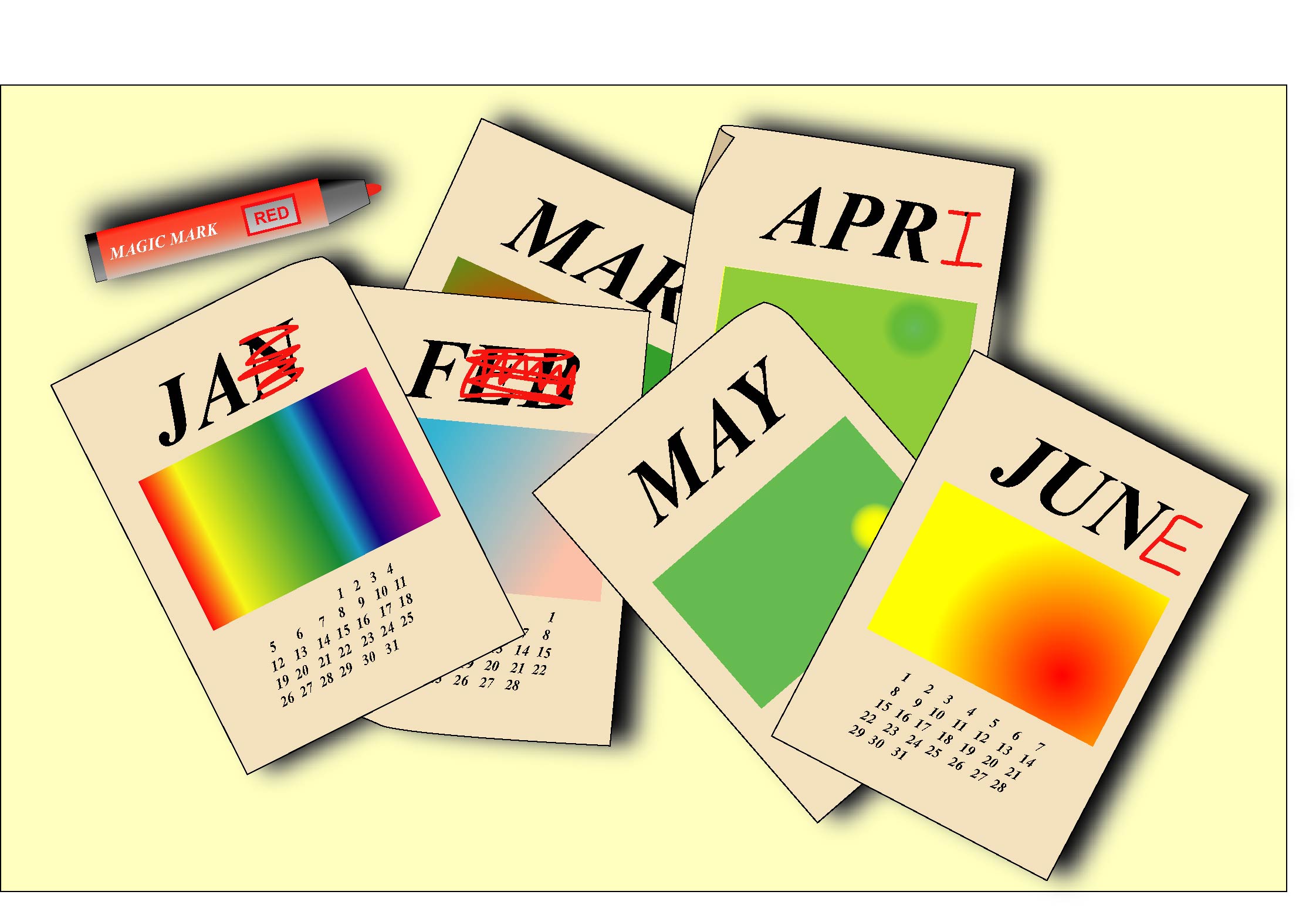 I remembered Ernie explaining some time ago how some people has a sort of sensory mix-up in their brains and as a result they could "see" letters as colours, or hear tones when they observed colours, or could even taste musical notes. Ernie had a rare condition that meant he could hear numbers - he had told me that, for example, when he scanned the digits of pi they formed a musical progression that sounded like a Bach Toccata ("a lovely melody", he had commented at the time), and that the logarithmic constant e had something of an "oompah-band" theme ("a rather hideous, endless, polka", he had added with a slight wince).

"Also, when I look at a word, if there is a numerical connotation with it, I hear the sound of the associated number. So January (being the first month) always sounds like the number 1, February sounds like 2, and so on to December which sounds like 12. And just to complicate things, when I see a set of words that can be spelled out with 16 letters or less, my mind automatically substitutes a hexadecimal digit for each letter (the same digit for the same letter in each case of course) to convert the words into hexadecimal numbers - and then for each of those numbers my mind plays the sound of one of its divisors in my head. And the problem was that in my original efficient calendar every hexadecimal substitution produced a dreadful disharmony between the two sounds for at least one month!"

"Ummm, I see (I think).", I replied. "Is there more than one way to substitute hexadecimal digits for the letters in your calendar that would have the same result?", I asked. "As a matter of fact, there is", Ernie replied, "but my mind always seem to choose the unique substitution that doesn't use the hexadecimal digit 0 and that also also makes my middle name equal to my most favourite number!".

Ernie then told me his what his favourite number was. Unfortunately it has slipped my mind already, but I do remember that he told me it was a prime. If I told you that Ernie's middle name is DAN, do you think there is any way to work out what his favorite number is?

(Hexadecimal digits will be represented as lowercase letters a-f, while the unknown letters will be uppercase.)

ADEFIJLMNOPRSUY are the digits 123456789abcdef in some order.

Testing each remaining value for A, only 5 and f make DAN (cAb) a prime.