Disclaimer: This is an open-problem, I don't have a complete solution for this puzzle yet.

We are playing a $2$-player game: you as a challenger and me as a judge. Initially, there is an empty infinite $2$-dimensional plane.

Alternately starting from you, put a single point. Your points will be denoted as $O$-points and mine will be $X$-points. The point we put can be anywhere — it may have Real coordinate — as long as it is not overlapping with any previous points. 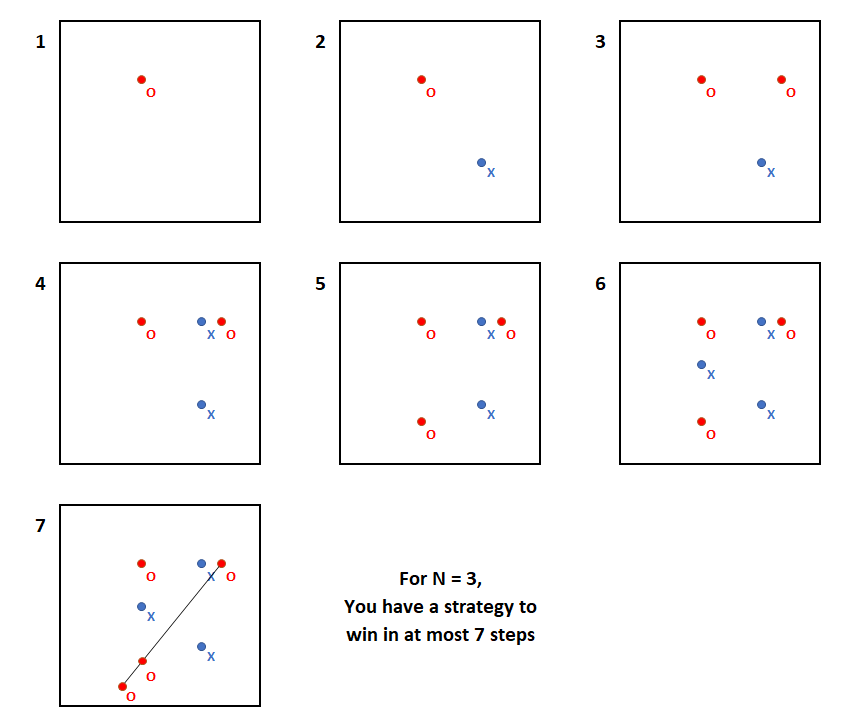 First of all, lets present a strategy for $N=4$. 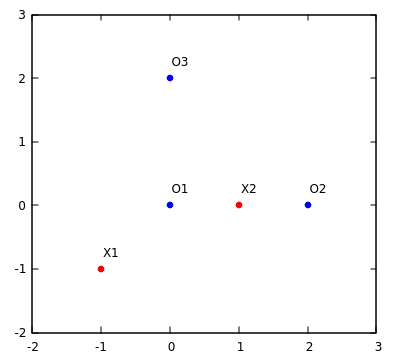 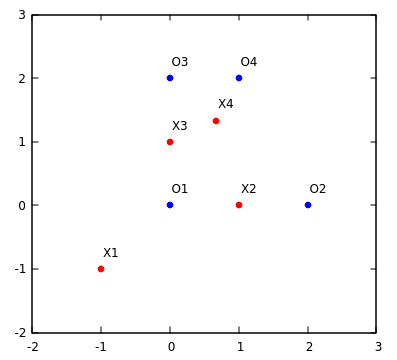 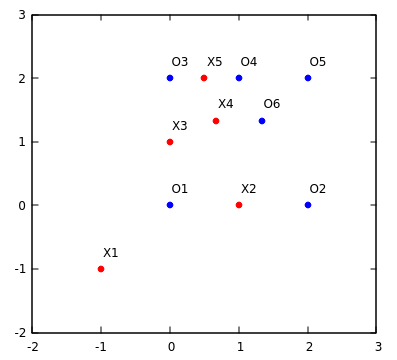 Now $O$ has two line segments, each with 3 points. It doesn't matter which segment $X$ blocks, $O$ will win on the other since $X$ cannot block both.

As we saw previously, we can in 12 moves (six moves by $O$), get an unblocked line with 3 in a row. Lets say we play out this strategy in 3 sections of the real plane, roughly forming a triangle. We will make one move in each section round robin style.

$X$ can either concentrate on eliminating all possibilities in one section, or follow us to each section we move in. If $X$ concentrates on one section, then in two of our sections we will get 3 in a row easily using the above strategy since there is less opposition to our moves.

If $X$ instead chose to follow our round robin strategy in each section, then we would get 3 in a row in all 3 sections using the above strategy. Either way, at least two of them will have 3 in a row.

So long as we didn't make these lines parallel, we can choose a 4th point on the intersection of these lines. This will give us 2 lines of 4 in a row with no blockers. On our next move, we can complete a 5 in a row.

General solution for all $N$

We can simply repeat the $N=5$ strategy for a number of sections on the ever growing real plane. Again, $X$ will be forced to either follow our round robin strategy, or commit to a section. Either way, we will eventually get 4 in a row in at least 2 sections. By placing a point in the intersection of these segments, we will have 2 sets of 5 in a row.

This strategy can be repeated, growing larger and larger each time to achieve all possible $N$.

I think you can

win even if you need to connect a kajillion dots.

Well, any two points can be connected by a line, right?

Then you can see that

When you put a point down, you can draw a line from that point to any other point you already put down. {important}

The challenge is that your opponent can block the connections with a point of their own.

But as you remember about

Because of the {important} knowledge above, you see that

you can connect lines to $n-1$ dots when you put the $nth$ dot down.

That's a lot of connections you can make with lines.

Since your opponent has only put

Your opponent can't block both lines, so you got a 4 in a row!

The strategy for $x$ dots in a line is

put many many dots to make a kajillion connections. Maybe even Graham's number.

And then you make

So you can get infinity in a row! YAY!

-edit- Oops, yeah there was a mistake as @GarethMcHaugan said. You should look at @Trenin's solution instead.

I think @Trenin has nailed it. Here's a slightly different formulation where we prove it by induction.

Not the answer you're looking for? Browse other questions tagged geometry strategy game game-theory or ask your own question.