A minimal stalemate with no possible illegal moves [duplicate]

Imagine that the main goal of the game of chess were to actually capture the opponent's king, not just checkmating him. So a stalemate would (usually) no longer be a draw, but a loss for the stalemated side (since they are compelled to expose their king into check, and he will be captured next move). However, some exceptional positions exist (let's call such a position an absolute stalemate), where the stalemated side still has no moves even if it were allowed to move the king into check / stay in check.

Here is an example of an absolute stalemate with 8 pieces on the board (Black to move): 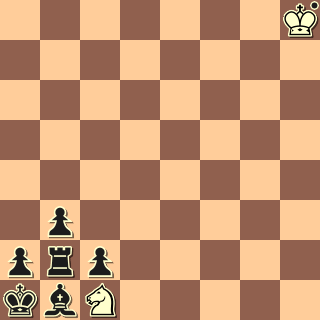 So, here Black has absolutely no moves: Black's king is surrounded by his own pieces which are not pinned; all black pawns are blocked by the pieces and cannot capture anything, and the rook and the bishop are also blocked. The white knight cannot be captured and does not give check to the black king.

The question: What is the minimum number of pieces to achieve an absolute stalemate?

your original position, without the white knight and with the king on c1.

14
No moves at all, not even to put yourself in check

20
The Black Prowler (chess)
16
Can white's rook and knight without moving white king force stalemate?
12
Capturing The Shadow King
14
No More Kings puzzle
6
A Battle of Dysfunctional Kings (Chess)
23
A Warped Chess Maze
14
No moves at all, not even to put yourself in check
8
3D Chess - Stale NBA (kNight-Bishop Assault)
8
Three-player chess on a 7x7 board
11
A delve into extraordinary chess problems: Self-Stalemate 2