The New York Times hosts a brilliant puzzle called Letter Boxed.
The rules of the game are quite simple:

One aim people who play might have is to solve in as few words, using as few repeated letters as possible.

For example (using #3 from below): 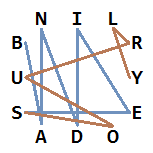 Spelling out "Bandies Sourly", touching each letter once, might be considered better than: 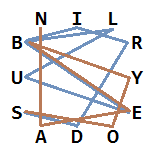 ...which spells out "Bluebirds Soybean", which touches the 'B' three times and the 'E' twice.

(Note that in both cases the 'S' is touched once, but used both at the end of the first word and at the start of the second, as per the rules.)

That, however, is not the aim here. The special solutions required in this version are all two words long, but they have something in common (and do not include either of the above solutions).
Can you find these special solutions?

Edit: These are some suggestions for optimal solutions. As Jonathan Allen has pointed out to me, optimal solutions are not necessarily special solutions so we are looking for something else. I'll leave this here in case any are right and give someone an idea of what to look for.

IMPLODES STABLY (not sure if optimal)

They all seem like components of cryptic crossword clues to either names or places. For example, number 5 could clue BENGAL. I have yet to work out the connection though.

Not the answer you're looking for? Browse other questions tagged word pattern or ask your own question.

18
What is a Spaced Out Word™?
6
How many 5+ letter words can you find?
2
Shortest word to longest word, step-by-step
23
Spelling Bee Bee Bee