Has the professor once again made a mathematical blunder, or do such triangles indeed exist?

It's possible if Professor Erasmus can reflect triangles when creating isosceles triangles. If we imagine them as being cut out of paper, this would be by flipping over the paper. 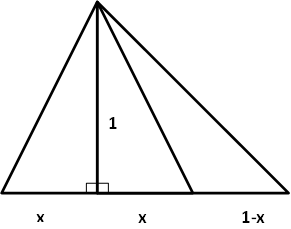 This is an isosceles triangle if we set $x=\sqrt2-1$, making the bottom and right edges both have length $\sqrt2$.

The professor has blundered. The triangle he claims to have constructed cannot exist in Euclidean space.

(I apologize for the lack of pictures. I know they would make my explanation/proof easier to follow, but I do not currently have access to any tools to create or upload them.)

The "Professor-Erasmus-Triangle" (PET) must have the two equal sides equal in length to the longest edge of $ABC$, since we can't add something to $ABC$ and make it smaller. (Not exactly rigorous, I know, but this isn't Math.SE, so I'll be a little more flexible.)

So, what if it's tall? So then $AC=BC>AB$. In this case, we can create the third compenent and the PET by extending $CB$ to a point $D$ where $AC=AD$. We can also find the first two component triangles by choosing a point $E$ on $CB$ were $ED=AD$. So now we have the Professor-Erasmus-Triangle $ACD$, with smaller triangles $ABD$, $ABE$, and $ACE$. Also, just by its construction, we know we can combine $ABE$ with either of the other smaller triangles to make an isosceles triangle. So, the only question that remains is, (how) can we combine $ABD$ and $ACD$ to make an isosceles triangle?

By their construction as parts of an isosceles triangle, we know that $AC=AD$ and $\angle ACE=\angle ADB$. Also, by combining with the other component triangle we get isosceles triangles, so $BC=AC$ and $DE=AD$. Then, by transitivity, $BC=DE$. Removing the segment $BE$ gives us $BD=CE$. This means that the two triangles have side-angle-side congruence.

In order for the two triangles to be combined into an isosceles triangle, they must have angles that are supplementary to each other (they make $180^{\circ}$ together). Since the triangles are congruent, these angles have to be right angles. However, if $\angle ACE=\angle ADB=90^{\circ}$, that leaves the third angle of the PET, $\angle CAD$, at $0^{\circ}$, which can't be. If $\angle CAE=\angle BAD=90^{\circ}$, that means that $\angle CAD>180^{\circ}$, which is also impossible. Finally, if $\angle AEC=\angle ABD=90^{\circ}$, then the third component triangle, which is between those two, has two zero-degree angles, $\angle AEB$ and $\angle ABE$. Since none of these are possible, that means that these two triangles, as constructed, cannot make an isosceles triangle. This, in turn, means that the PET cannot be "tall".

Since the Professor-Erasmus-Triangle is not "short," is not "tall," and is not equilateral, we are forced to conclude that it does not exist.

Note that this result does not necessarily hold for non-Euclidean spaces. For example, in elliptical geometry, where interior angles of a triangle add up to more than $180^{\circ}$, you could have an equilateral triangle with three $90^{\circ}$ angles, with the smaller triangles formed by trisecting one of the angles.

If you alter the sectioning, you won't be able to create an isosceles triangle out of at least one pair of triangles.

If you alter any of the angles of the starting triangle, you'll have a scalene triangle and/or you won't be able to create an isosceles triangle out of at least one pair of triangles.

The degenerate triangle can't be created by a "cut", so Professor Erasmus's claim "that he can cut his triangle into three smaller triangles" is false, which means the Professor-Erasmus-triangle can't exist as described. However, he hasn't necessarily made a mathematical blunder because the geometry works, albeit with degeneracy.

Not the answer you're looking for? Browse other questions tagged mathematics geometry dissection tiling triangle or ask your own question.