Everybody needs a leisure activity. Most of the books I need for mine are downstairs, with none in the bedroom. But as I like to keep an eye on things I have this (unsorted) pile by my bed to remind me. 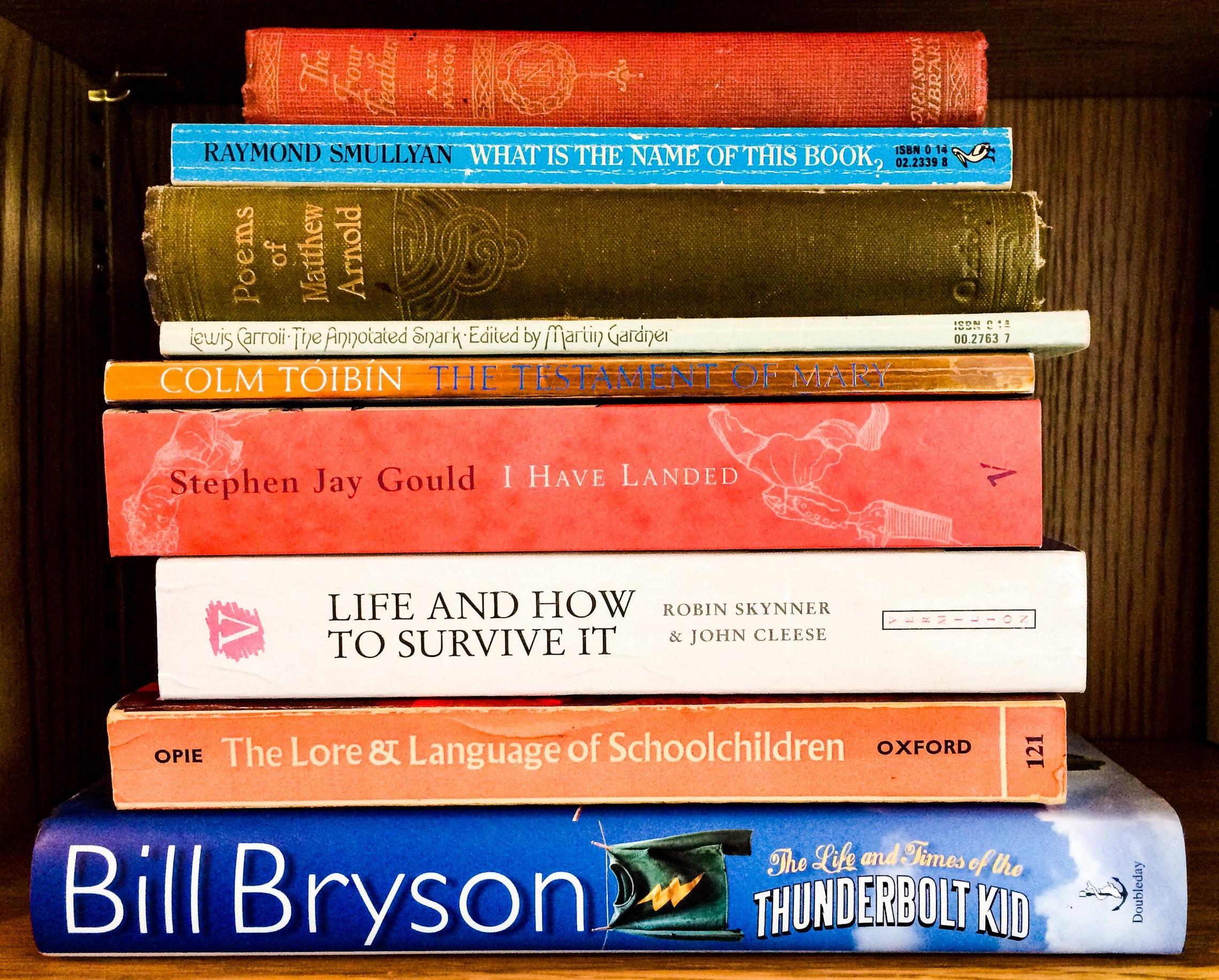 Did you notice the hint in the question?

Don't worry too much about the knowledge tag. You don't need any external knowledge at all to work out the answer, and once you have it you should be able to validate it with minimal research.

No anagrams were used in the making of this puzzle. And it's nothing to do with beds or bedrooms.

birdwatching (hinted by the word "hobby" and the reference to "keeping an eye on things").

The Four Feathers
What is the name of this book? (published by Pelican)
Poems of Matthew Arnold -- "Arnold" means something like "strength of the eagle", etymologically.
The Annotated Snark edited by Martin Gardner
The Testament of Mary by Colm Tóibín -- "Colm" means "dove".
I have Landed by Stephen Jay Gould
Life ... by Robin Skynner and John Cleese
Lore & Language ... -- "lore", among several other meanings, means a particular portion of a bird's head
Life and Times of the Thunderbolt Kid by Bill Bryson

Explanations that I proposed, apparently aren't the intended ones, but seem worth recording:

Matthew Arnold: one poem is called Philomena (= nightingale), and the introduction in that edition is by Sir Arthur Quiller-Couch (quiller = not-fully-fledged young bird).
Testament of Mary: I wondered whether it was the Penguin edition of that play.
Lore and language...: Opie (pie = magpie, near enough), Peter (first name of one of the two Opies who wrote the book; it denotes the call of certain birds), and Iona (first name of other author), the famous island sharing whose name is strongly associated with St Columba (meaning dove).

I think there is an additional hint in the first paragraph where the OP says the pile is "unsorted". This suggests taking an anagram of some sort and that the intended word is actually scrambled

Not the answer you're looking for? Browse other questions tagged knowledge pattern visual or ask your own question.

15
The mysterious list
10
My Uncle's inheritance
19
Let us all join the party for hope!
12
Enter the Vermillion
26
I can be heavy, but I'll never sink. When I am ready, my glass is a drink
7
This is for Duck (Original Version)
28
Check out my bookshelves
10
Bookshelves 2 - what am I reading?
4
Can you guess the character I am thinking of?
31
A trip to the library