Touching matchsticks with compass and straightedge

The question Touching Matchsticks asked for the smallest matchstick graph where every node is connected to four distinct edges. The Harborth Graph is the smallest such, with 104 edges connecting 52 nodes.

It is made of four identical (but for reflection) sections, each of whose shape, in isolation, would have one degree of freedom. Each section has two pairs of points that connect to other sections; drawing a line through each pair of points, the angle may be made greater than or less than ninety degrees; by the Mean Value Theorem, the angle may also be equal to ninety degrees, which is what's required for the shape to fit together with reflected copies of itself. 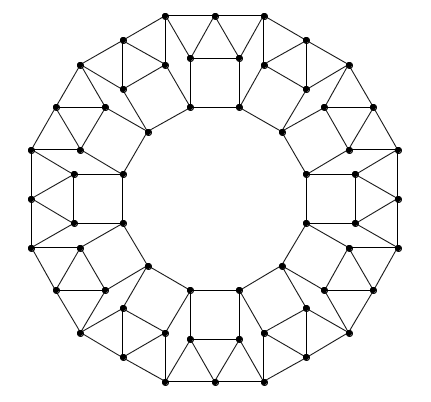 Slightly better than the easy answer.

Not the answer you're looking for? Browse other questions tagged mathematics geometry matches or ask your own question.

10
Ernie and the Geometric Ginger Cookies
14
Touching Matchsticks
21
Five Angles in a Star
8
Matchsticks for lengths
6
How many dimensions?
6
How many possible different shapes are there on a 4x4 dot grid?
17
Sharing a field among 4 sons
0
Number of turns for two wheels to bring edge-points together