Check out my bookshelves

It's always fun seeing what other people have on their bookshelves. Here's one of mine. But this isn't just a chance for a quick snoop - what I want to know is

How are the books ordered? 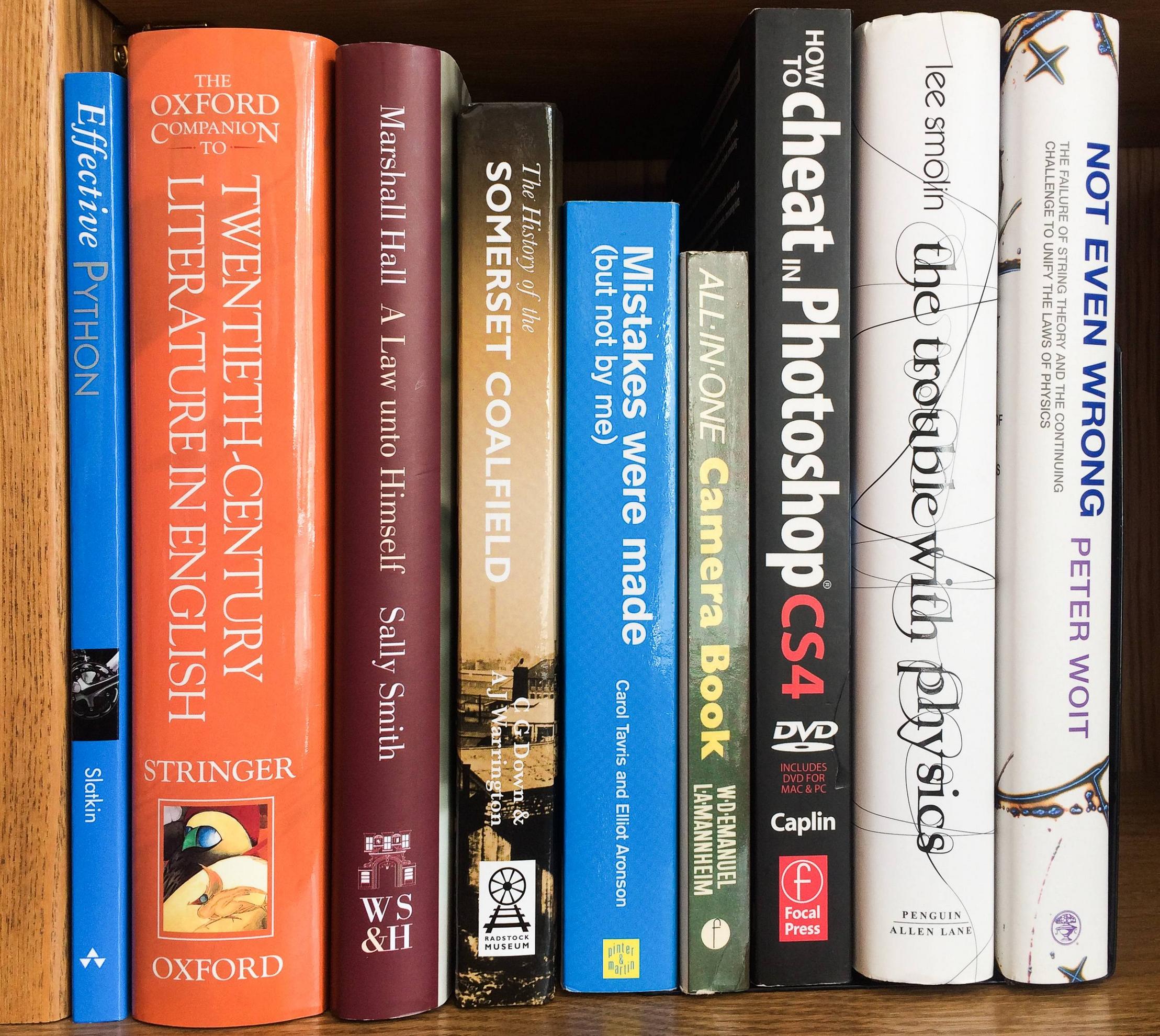 Everything you need is in the picture. There's no knowledge tag and no reference to anything external.

Disaster! My plan to re-organise my entire book collection has hit a snag. What am I going to do with the annoying books that don't fit anywhere? 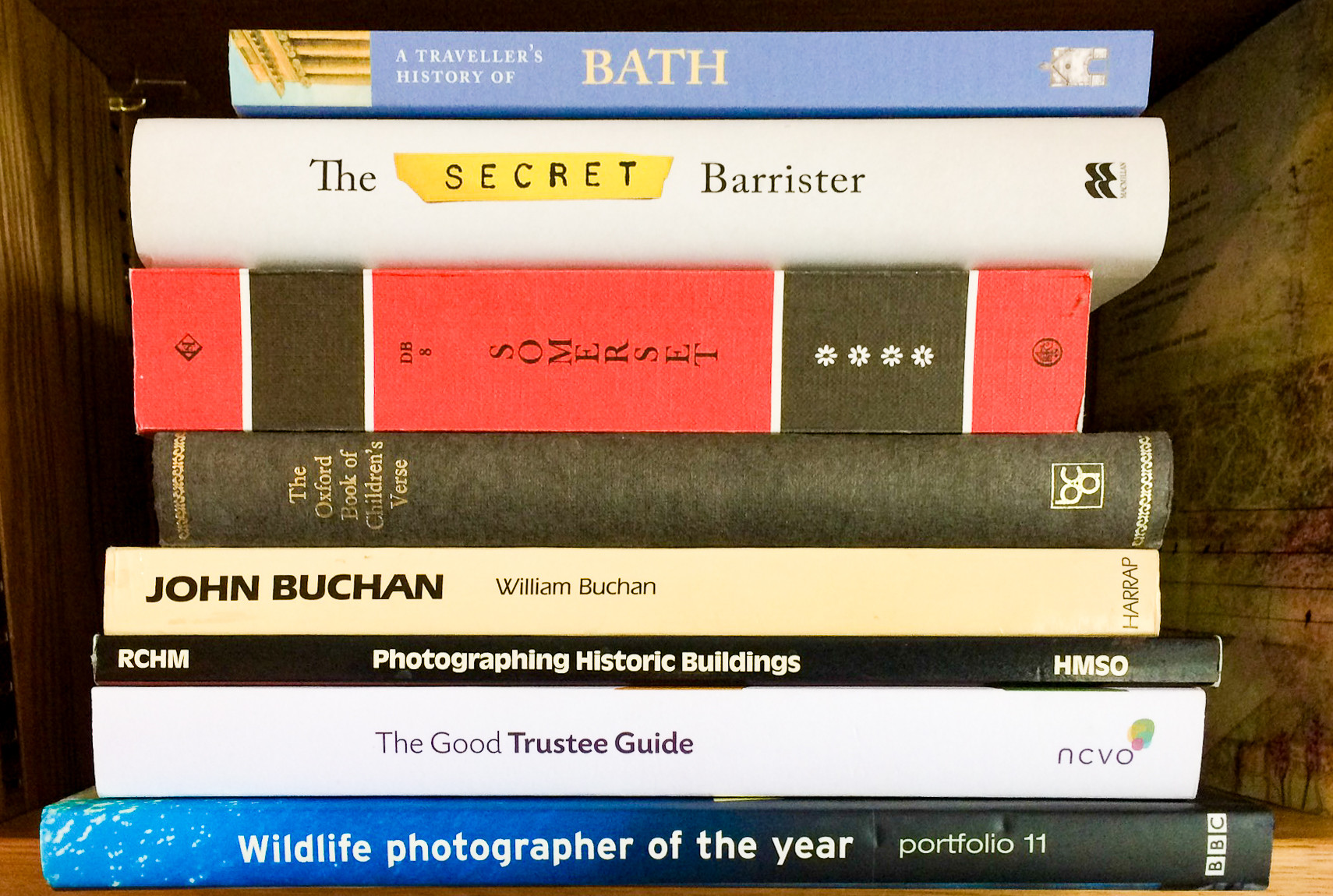 Hint 3 - now with even more clues

As you might have noticed, seven of the eight Annoying Books are annoying for one particular reason. That reason might suggest which printed words on the spines of the books in the main image you should look at very closely. Ultimately, you're seeking an alphabetical ordering.

No sophisticated analysis or exhaustive search is required. There's some easy-to-see feature in plain sight that nobody has picked up on yet. Now I really must have given it away.

They seem to be ordered

by depth. You need to look at the bottom of the books, the deepest one is on the left.

I think this is about

the names of the author(s), somehow, and possibly how those interact with the titles,

because when you look at the Annoying Books,

Then this becomes essentially a word-property question:

we need to find out what property of these nine words or word-pairs is being used to order them.

Bearing in mind that one odd-one-out among the Annoying Books, it might be some property of:

the letters of the author's last name which do not appear in the book title.

For the books in the picture, those are:

By Subject, then title

The first is Computer Science. The second is English. The third and fourth are History( then arranged by title: A Law, The History), The fifth is Philosophy. The sixth and seventh are photography (then by title: All, How). The eighth is physics. The ninth is string theory

Mistakes fits my pattern if it is Philosophy, but unfortunately the back cover found in an image on Amazon declares it a Psychology book, and that doesn't fit the pattern.

Psychology falls under Medical, so if we categorized it as a Medical book it would lie between History and Photography

This is in some sense "less than a partial answer". But since this simple-looking puzzle has been here unsolved for so long, even with a bunch of hints, it seems worth doing anything that might help. So, here are some things I've considered that don't appear to lead anywhere useful. (Obviously I'd prefer to post a list of things that do lead somewhere useful. If only there were any.) I might have screwed some of them up, of course. Maybe something here will give someone an idea that leads somewhere. Or maybe something here actually does work and OP will take pity on me and indicate somehow how I goofed.

First of all, some obvious observations.

OP's hints make it very clear that the authors are relevant. Exactly one of the "annoying books" has an author. What's notable about that one? Well, the title is John Buchan and the author is William Buchan. So (1) the title is shorter than the full author name and (2) the author's surname is a substring of the title. (I guess the author is actually related to the subject of the biography, but we've already been told in hints that this sort of external information isn't required.)

So, what might we try? Well, first of all,

OP's hints kinda suggest that we might want to give very close visual scrutiny to the authors' names on the spines of the books. Some sort of steganographic wizardry, perhaps? I've looked closely and haven't found anything obviously interesting, and (though I haven't attempted any sort of serious analysis) it doesn't look as if there's anything magical in e.g. the low bits of the pixel values. In any case, it seems like that wouldn't be fair; this is meant to be an ordering of the books, not randomized books with some sort of ordering then encoded into the picture.

More to the point:

Take the author's name (or just the surname?) as given on the spine, and remove from it all letters found in the title. Hope that we end up with something that yields an obvious ordering. Doesn't seem to work because for the second book on the shelf (Stringer) no letters are left after doing this.

Look for letters shared between author's name and title. Doesn't seem to work because it's hard to see why the Buchan biography would be Annoying in this case, and e.g. the first book has T,I,N (in order of appearance in either title or name) and there's no way that's coming out alphabetically ahead of the second, no matter how we order it. (Well ... sort into order and use reverse lexicographic order; T matches T, N is earlier than S. But then other books later on the shelf are going to come out earlier than that.)

Take the author's name (whole name or surname), index by its length (with or without spaces) into the title (with or without spaces, respectively), either from the start or from the end, and see if we get anything that yields an obvious ordering. Doesn't seem to work because many variants are impossible because either Tavris & Aronson or Emanuel & Mannheim have too-long author names (depending on whether we include spaces and punctuation), and I think I've tried most of the possibilities without finding anything useful. (There are a lot of different possibilities and I certainly haven't been completely exhaustive. Trying out dozens of essentially-identical things in the hope that one of them will turn out to work is Not Fun.)

Look for some physical feature of the book spines that somehow picks out particular bits of the authors' names. Doesn't seem to work because for some (Smith, Caplin) there really truly seem to be no such features we can use -- unless, again, there's some steganographic wizardry going on.

I think the books are ordered in a

everything is about falling,breaking,mistakes,errors,collapsing,all-in-one, stringtheory, effective python is a random access book. Annoying, Oxford, Camera, Somerset, History (among annoying books they have a synonym or similar name in the title among main picture books.) (their initials read together also gives the answer)

15
Where is my girlfriend?
25
Insecurity to the Party
10
Bookshelves 2 - what am I reading?
11
Bookshelves 3 - what's my hobby?
20
Bookshelves: the intruder
12
What is a Check Word?
16
Check my drawing skills!
15
Mensa IQ Check app puzzle - symbols in boxes in a 6x6 square
3
Spin the letter-cogwheels!
1
Bookshelves: Einstein's place