On a hiking trip, you find a piece of paper on the desk of an abandoned cabin: 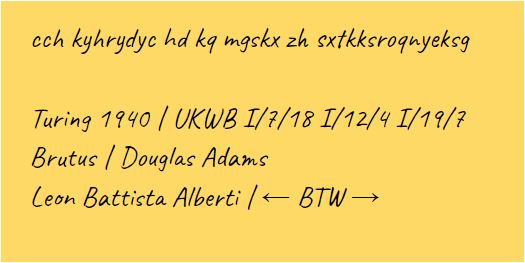 Also on this desk is an old-fashioned computer that is, unfortunately, password-protected. You are sure that if you can solve the riddle left behind on the piece of paper, you'll be able to get into the computer...

Happy riddling! (Hints will come soon if nobody can solve this...)

You might want to try replacing "Leon Battista Alberti" with "Johannes Trithemius..."

The owner of the cabin made one careless mistake: the last three lines are in the order that they were used by him to create the message...

Look at the Wikipedia page that includes all the names from Hint 1, Hint 2, and the last line of the note.

From the PARTIAL ANSWER! and hints

Cipher order reversed as per the hint 3

Enigma M3 with the given parameters and an empty plugboard gives

Okay, so firstly, this is only a partial answer, as I do not have all of the clues figured out just yet, but I'm sure you can tell me if I'm on the right track

The first clue comes in from Alan Turing, in 1940 he deciphered the Enigma machine, so we're looking at an Enigma Cipher, After the slash we have a series of Enigma rotor settings (and as there's only 3, it's not a 4-rotor machine)

So we are limited to an Enigma Model 1 or M3, as these are the only 3-rotor Enigma machines with a UKW-B reflector setting.
Leaving the plug board blank gives us:


Next, the second line

Brutus is a character in William Shakespeare's Julius Caesar; so I reckon this is some kind of Caesar Cipher. This leaves Douglas Adams as the clue to solve the Cipher. In his novel series "The Hitchhiker's Guide to the Galaxy", the most famous number is 42. (Being the Meaning of Life, the Universe and Everything)

Plugging into the Caesar Cipher the above string with Rotation of 42 gives us:

Google searching this guy brings up that he was a cryptographer who developed his own Cipher (The Alberti Cipher).

The hints point to Giovan Battista Bellaso and Johannes Trithemius; who each have their own Ciphers... So maybe these Ciphers are needed next?

The page on the Vigenere cipher mentions all three of those people; however, I have absolutely no idea what the key is or what the slash means.