Shot in the heavens afar

I was thinking of saving this for my 100th puzzle here, but nah... I got a better idea for that. I wonder what I'll do to start off.

What numbered post is this of mine? What numbers divide it? Which is unique?

Can you derive the answer from the letters of the obvious part? Why... not?

If every different letter had a different corresponding colour, there may be one particular colour that would startle you (though this kind of approach to my riddle might prove exhausting). 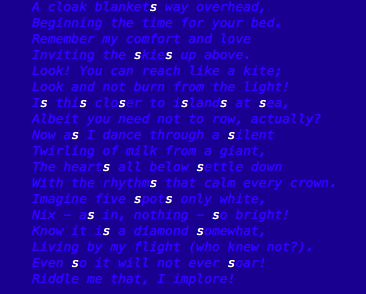 (I tried getting the markdown editor to render the html for this but ended up just doing a screenshot...)

Could this riddle be describing

First, the "answer staring in my face":

The first letters of each line spell out "A BRILLIANT TWINKLER," which is a clue for a star.

And explanations for some of the lines of the riddle itself:

The stars can be thought of as a blanket, cloaking the night sky. Also, when the stars come out, it's usually time to go to sleep! (I should remember that for the future...)

I guess this refers to the fact that you can't physically go to a star (at least, not as of the publishing of this answer), but they are fairly bright.

This refers to the Milky Way Galaxy, which revolves around a supermassive black hole.

Five stars can form the Big Dipper constellation, though I'm not too sure if that fits with the "nothing so bright" part.

Stars are often depicted as diamonds. "Flight" may refer to how sailors in the past used the positions of stars to navigate their way across the ocean or how pre-Civil War slaves escaping the South via the Underground Railroad used the Northern Star (Polaris) as their guide.

Playing off the hints and PilsNot3's answer, I thought you may be eluding to a specific star (or stars)...

Given the 99th post, the unique number I plucked out that divides 99 is 33. The star by name (noted as Alioth) is the 33rd brightest star in the list here: https://en.wikipedia.org/wiki/List_of_brightest_stars

From the clues in the poem, the stars that make up the Big Dipper can appear as a diamond or a kite, depending on one's perspective or imagination. "Five spots only white" would elude to the stars that comprise the diamond as well as Epsilon Ursae Majoris, which is the first star in the tail.

Not the answer you're looking for? Browse other questions tagged riddle wordplay visual poetry letters or ask your own question.

1
How can connecting marks in a text to form a picture be used as part of a puzzle?

2
Two Tails Interlinked
0
One of my Brothers Live on Wilson, Created by Someone Born in Britain
16
Wordplay is Heavier Than Me
6
I Have No Lungs
27
I can be heavy, but I'll never sink. When I am ready, my glass is a drink
8
Teapot Riddle no.11 (fan made)
7
An Arranged Riley Riddle
9
Riddle - What does it mean?
14
Time to Settle Down!
10
How do you feel?