My school has a “crack the code” riddle [closed]

Title says most of it. I've been at this for hours with almost no progress. There are two codes (37068 and 57063) that didn't work although they seem to fit the conditions given. Can someone please give a clue to put me on the right track? I feel like I'm going absolutely nowhere, but would still like to figure it out.

Update: The owners of the website have fixed the code. Apparently it was bugged and the visible number code that were hints weren't changing, although they were supposed to. This made the puzzle impossible since the answer was changing each time the page was refreshed or you attempted to crack the code.

Thanks y'all for helping before and after the fix!

The puzzle is broken. You can find it at project-archive.net. Looking at the Javascript code, the solution changes every time the page is loaded, but the tips are the same.

There's multiple contradictions in the puzzle as presented:

There is a lateral thinking workaround for this:

The responses given for each guess refer to 'number', not 'digit'. So they could be referring to more than one digit, e.g. 16 is correct in 16374, but in the wrong position, would mean the sequence 16 appears elsewhere in the correct code.

This does seem needlessly convoluted though.

You have to use all the information available to solve these, and narrow down what digits are ruled in or ruled out by considering all four results.

What is concerning here is that the usual expectation is that you'll be told how many (if any) digits are correct and in the correct position, and how many (if any) are correct but in the wrong position. Since we see the same guess generate two different outputs, either the puzzle is flawed or there is more going on here than meets the eye. If it's giving incomplete information for each guess, this doesn't seem like a fair puzzle.

First of all, we can state:

Of the combination 97360, 2 digits are in the right position, and 1 digit is in the incorrect position.

We can also conclude that of the digits 0,6,7 and 9, two are in the correct position and one is in an incorrect position, so one of those digits is not in the final code.

This would contradict the statement about 16374 though, meaning we can't assume that 16374 doesn't have any digits in the correct position.

I'm stuck here, this was just my line of thought regarding this puzzle..

Your version seems broken. Posting this method of solution in case you get it working.

So I went to http://project-archive.net/ as DASF indicated that the puzzle existed there and failed a couple times. The numbers changed each time but the clues remained the same, and that's because they were accurate each time as the puzzle reset with a new code and new numbers to correspond to it.

The first thing I did was get rid of all numbers that existed in at least three rows to remove clutter, so 7, 5 and 2 were out.

Then, focusing on the 4th set I looked for numbers that existed in that series but not the first two series, so 8 and 6. One of these was in the correct position, the other was not.

This meant I had a number that was in the correct position still for the 3rd set, and since I have a correct number in the 1st set with only 4 and 3 left as options and no 3 in the 2nd set, I figured 3 must be the correct number.

If you go to the webpage in question, right-click for 'View Source', and then go to Console, you can see your answer (top right): 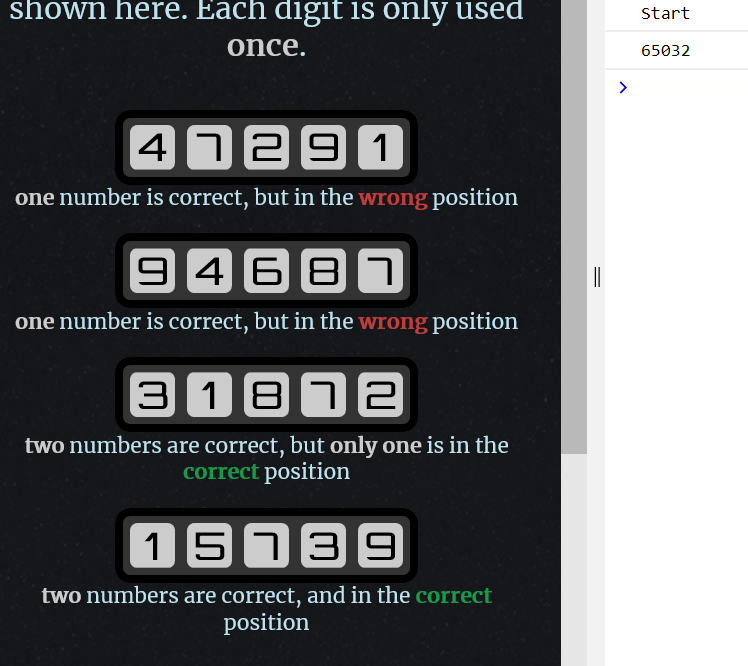 and the clues fit! Refreshing the page changes the answer in the console and the combinations on the main page, but not the clues.

creating a vertical permutation of the rows of:

and then assigning a unique digit to A-J.

Then the code displays the first four columns as previously tried combinations, for example, FJHDI.

Not the answer you're looking for? Browse other questions tagged number-sequence password locks or ask your own question.