I’ve decided to do something a little different this time. I’m going to give you nearly all of the moves of one side, and must figure out the rest of the moves of the other side. Variations are allowed, as always, but the end result must be the same. I am sorry in advance of this is not possible. I just wanted to try something new!

Cryptic Clue #2: How would you feel if your closest friends betrayed you and let you die?

Cryptic Clue #3: Assume that all moves are pawn moves unless it can be proven if it is stated as such.

Task: To use retrograde analysis and give an answer with all of the question marked moves solved, along with reasons for each move. A simple PGN post shall suffice. A link is optional.

As always, may the odds ever be in your favor!

This one will be lots of fun, I say!

Here is the solution. The explanation follows.

Here is another, where Cryptic Clue n°1 is understood as

There is plenty of freedom in this puzzle, as shown by these two examples.

After move 14, the situation is (up to White's moves and possibly captured Black pieces) 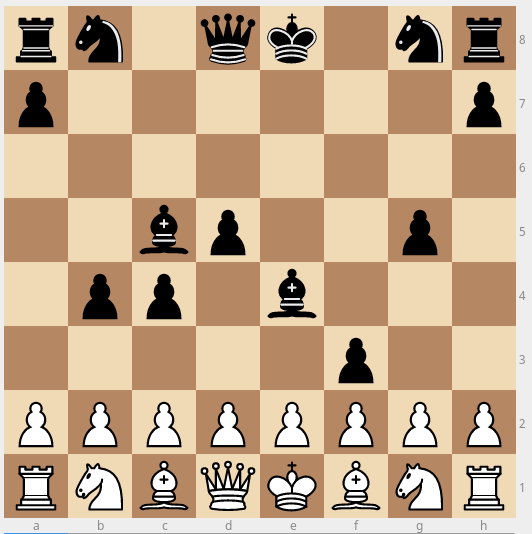 and in this position,

g4 comes with check. There can't be any discoveries, so the White King is either in h3 or f3

PROOF THAT h3 IS IMPOSSIBLE

The Bishop in e4 was captured some time earlier (as well as the Black e pawn to allow the Bishop there in the first place).

WHERE IS THE WHITE KING AFTER MOVE 19.

It can only be in f6, e5 or c5. But c5 is impossible due to the sequence of checks by the Queen. f6 is possible only if there is a white piece at f5 AND the Knight at g8 was captured. It is not really in White's interest to spend time capturing Black pieces, given that Black is to deliver checkmate at the end. So e5 seems more likely. Note that e5 implies that the Queen gets captured at move 19, which is not in our interest either but coincides with Cryptic Clue n°1.

WHAT THE FINAL POSITION TELLS US

We know that Nf3 is mate, which means that the White e and g pawn, as well as the Ng1 are gone. So is the white Queen, consequently. One of the pawns can conveniently serve the purpose of capturing f3 and the Bishop e4. The Queen, on the other hand, can serve the purpose of letting the Black rooks free, so that they can help checkmating in the end (otherwise Black is poor in material).

White captures the B Queen at move 19, but also there are exactly 19 moves where White offers their Queen to be captured.

The King's closest friends are the Queen and Light square Bishop, both of which are in a position to capture Black's mating material (the Rook at a6) but don't interfere.