I have invented a new puzzle called Intersection. Let's find out what it is!

You are given an $n\times n$ grid with circles and boxes inside arbitrary squares. A circle cannot be in the same grid square as another box; there must always be at least two circles, but at least one box; the circles and/or boxes cannot fill up every square in the grid. Now onto the real rules of the game!

Suppose we let $n=3$ and have the following configuration:

The aim of the game in this case is to connect the two circles with lines, but the lines must intersect at the grid square with the box in the middle.

With those rules, here is the solution (though there could be more than one, but that I don't know for sure): 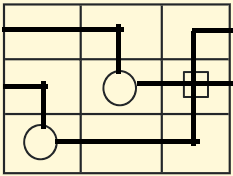 How about something else?

The solution to this is:

(sorry for the bad drawing skill; trust me, I'm better by hand than by software, but that's besides the point)

So, let's bump it up to something a little harder, shall we?

I hope my puzzle makes sense.

P.S. This game is like Flow for those who know that game, except the lines, well, intersect each other.

Edit: Turns out there is a game called Flow Free: Bridges such that lines can intersect each other. Unfortunately, this was unbeknownst to me when I created and posted this puzzle. My apologies. 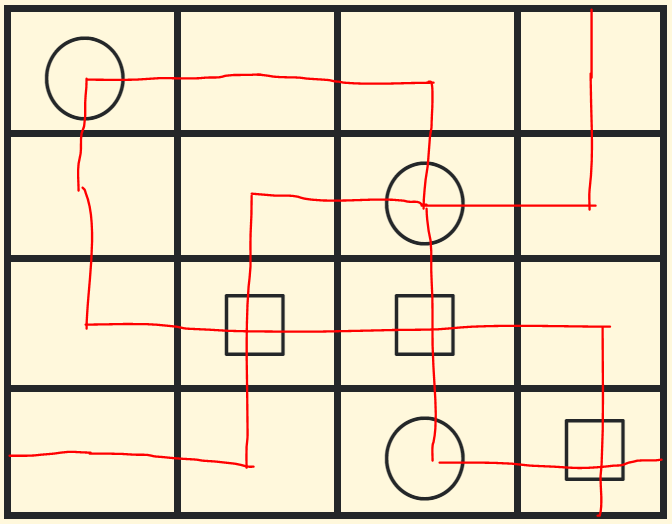 I think I've got an alternative solution to noedne

It's not too different to the above, but I think this counts as 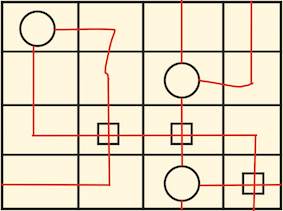 And here is one that is different

8
A "Find the Path" Puzzle
12
Masyu puzzles with many circles
6
Swap — A Puzzle I Created
5
Modified Intersection Puzzle
14
A Shingoki Puzzle
12
Carcass Walking: An introduction
8
Bridges of Carcass County
16
Nurimisaki Puzzle: Introduction
15
Hotaru Beam Puzzle: Is it impossible?
6
How to prove Yin-Yang alternating 2 by 2 is not allowed