Help the Monkee get to the bandanas

Micky Dolenz, drummer and vocalist of 1960s pop band The Monkees, has lost his headwear collection. It has been hidden in a maze whose walls are in unknown places. To find out the location of the walls, solve the cryptic clues and place the solutions in the maze. Can you help the Monkee get to the bandanas? 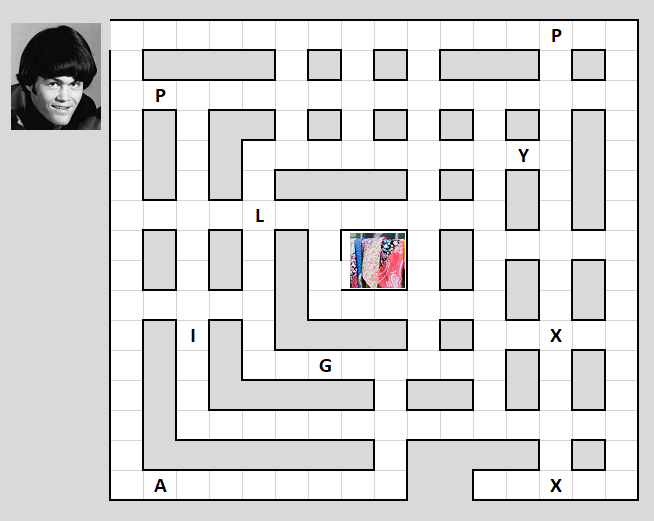 Partial answer to some clues.

Final maze.   Gareth and Chris have filled in most of the answers, so credit to them. The final maze looks like this: 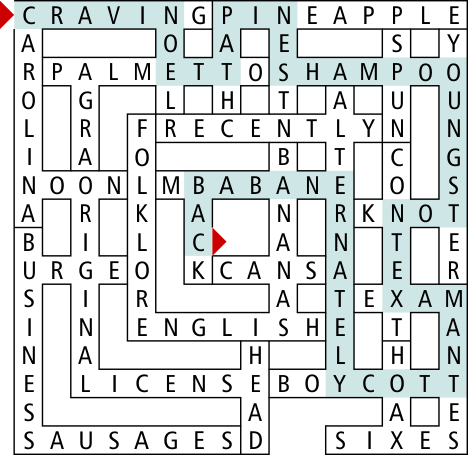 Partial If I could do inline spoilers, I'd inline the substitutions.

! PALMETTO not entirely parsed, but LAP + TOTEM all anagrammed up.

NO rt ON (not fully parsed but a good guess)

CRAVING (anagram of carving - "At Sixes and Sevens" means confused)

1 Oral tradition expressed by people with a strange role (8)

OK, so I've abandoned my pride and filled my gaps with others' answers; we now have everything except for 7a. The across answers are:

and the down answers are:

(I still don't quite understand 5d, but no one else has anything different and I think jafe has said that we have everything except 7a, so it must be right...)

Now, an observation that may (but probably doesn't) help us figure out something about the mysterious 7a.

Look at that Y near the top right. It has to be part of an across answer. The existing ones with Y in are BOYCOTT and RECENTLY. It can't be part of BOYCOTT because there isn't enough space to its right. If it's part of RECENTLY then the R is (at present) at the end of a down space, but there are no down answers ending in R. So either (1) that Y is the end of RECENTLY and there's a wall above the R at the start of that word, or (2) the Y is part of the answer to 7a. (Is there some way to make 7a be VERY? That does mean "extremely", and ends in Y, but nothing else about it seems to work.) I think option 1 is more likely.

Explanations for the answers I got:

1a. Permission to infuriate, losing nation's {5d:HEAD?} associated with the left (7)

2a. Pilgrim shakes head, joins {3d:YOUNGSTER} to abstain from participating (7)

3a. Orbit around vandalized totem symbol of South {10d:CAROLINA} (8)

4a. Important organ to {2a:BOYCOTT} keynote, leading to a tangle (4)

10a. High time for antivirus to block the middleman (4)

11a. Assessment for former Vietnam right-wingers (4)

12a. Newly have confidence in acquired currency (8)

4d. Turned to reject without first sign of reason (4)

HEAD? (HE=explosive, but what then?)

CAROLINA: IN A preceded by CAROL

Not the answer you're looking for? Browse other questions tagged mazes cryptic-crosswords or ask your own question.

18
Can Isaac get an even tan?
10
I'm hidden in the maze
71
Alice and the Fractal Hedge Maze
3
Get the largest number using the crazy circuit board
5
Programming the ColorBot
7
Help with a holiday cryptic crossword
3
Help finishing off a cryptic crossword
4
Cryptic crossword help
12
3D Crossword, Cryptic, Statue View & Maze
16
Friday's the most cryptic day of the week