Poisoned Glasses on a Platter

Three identical, mute triplets, $F$, $S$, and $T$, each of whom is a perfect logician, have been kidnapped. Their captor begins by instructing them that in a room that they will shortly enter, are six wine goblets, three of which contain normal wine, and three of which are poisoned. The poison is such that once even a drop is drunk, ten seconds later, they will die; but is of course otherwise indistinguishable from the wine. They are told that each person must drink from one glass; they may choose to drink all of it, or just take a sip (and their survival does not depend how much they drink).

To make things more interesting, the captor takes $F$ into the room, and truthfully points out which three are poisoned. They leave the room. The platter on which the six wine glasses are on then spins an unknown amount.

The state of the platter is shown below, where a white circle represents an empty glass, and a purple circle shows a full (or sipped-from) glass. Note how the glasses are in groups of two around the edge, these are indented to be equally spaced. 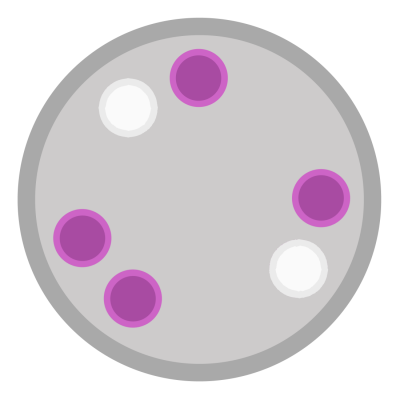 There's no lateral-thinking tag, it's a purely logical puzzle. So, you can assume that:

If in doubt, feel free to ask.

Puzzle created by me; I have the solution.

Consider the state of the glasses. They all lie in $L$-$R$ pairs. Three of them are poisoned. There are two options here: either all the glasses on the right (with parity $R$) are poisoned, or two of them are (this can be symmetrically generalized, so there are no other cases).

$F$ has been shown the positions of the poisoned glasses.

Regardless of which configuration they see, $F$ is going to choose, every time, a glass on the left. Logically speaking, there is either no chance, or 1/3 of a chance, for an $L$-glass to be poisoned, compared to 2/3 and certainty that an $R$-glass is poisoned.

At this point, $F$ may or may not be dead. We can now diverge, although we will find that divergence does not lead to many different paths.

$S$, being a perfect logician, and knowing all that we know, sees $F$, whether dead or alive, and sees a single empty glass on the counter. He is also aware that $F$, and only $F$, knew which glasses were poisoned. If $F$ is dead, that means that 2 $L$-glasses were poisoned, and $F$ chose the one unlucky one. This also means that all remaining $L$-glasses are unpoisoned, and $S$ has no reason not to empty, or sip from, an $L$-glass.

Regardless of the outcome, an $L$-glass is chosen. We know from the diagram that there are two empties and one sip, and that the empties have different parities. Therefore, we can conclude that $S$ takes a sip of an $L$-glass.

At last, $T$ enters the room. This is where things become a bit more interesting.

At this point, there are several options in play, but at the same time, very few options in play. Unlike $S$, who knew everything we knew, $T$ does not know whether or not $F$ emptied the first glass, and this makes all the difference in particular. Notably, if he assumes that $F$ only took a sip, then that means $S$ would have come into a "full room", and therefore, $T$ cannot know whether or not $S$ survived by dumb luck.

If he assumes that $F$ drank a full glass, then he follows our original chain of deduction and realizes that he has either a 50% or 100% (if $F$ is alive, or dead, respectively) chance of surviving if he drinks a glass of the same parity as the one already emptied, and only a 33% chance for drinking an $R$-glass - i.e. he drinks an $L$-glass, regardless of whether $F$ and $S$ are dead or not. We know from the diagram that this is not the case, as the empty glasses are of different parities. Therefore, $T$ must proceed by assuming that $F$ took a sip.

If $F$ is alive, and $S$ is alive, then it implies the one empty glass is likely to be on the side with either 2 safe glasses, or 3 safe glasses. Regardless, it's a high chance for $T$ to survive picking a glass of the same parity. Because this doesn't happen, we know that this isn't the case.

If $F$ is alive, and $S$ is dead, then the opposite is true, and $S$ likely stumbled upon the poisoned side; $T$ will pick a glass of the opposite parity.

If $F$ is dead, and $S$ is alive, nothing changes from the above answers; $T$ will still pick a glass of the same parity as the existing one.

Therefore, we can conclude that $F$ is alive, $S$ is dead, and $T$ drank the opposite wine-glass, and by dumb luck managed to survive.

Admittedly I'm very dissatisfied with my reasoning for $T$, mostly because I have been a bit lazy in crunching the numbers and therefore I'm not sure if $T$ would ever make the Sip Assumption - whether that results in a higher likelihood of survival. Indeed, the only reason I chose the answer I did is because the end result guided me towards the series of assumptions I made, and not any use of $T$'s perfect-logician-hood at all.

I have to go now, so I'll just post this partial answer. Back soon.

If $F$ had died, it would imply that the three poisoned glasses do not all share the same position in their respective couples (if all of them were the left one of the couple, just take one from the right and you will live). Therefore there would be, say, two "right" poisonous glasses and one "left". Let us call "$+$" a glass that has a probability of $2/3$ of being good and $1/3$ of being poisonous.

To maximize his chances, $F$ would have chosen a $+$-glass, and, being unlucky, would have chosen the only wrong one. Therefore, if $F$ is dead and has chosen a "left" glass, then $S$ only needs to empty any other left glass, and $T$ will empty the last one, and they will both live.

Since the empty glasses are not both on the same side (left/right), we know that $F$ is not dead.

26
How do you solve a word puzzle when you have no idea where to start?
2
The cage - a logic puzzle
38
Duel between the knight and the dragon
33
Find the composite poison in the wine bottles
30
Nine Bottles of Wine, One Poisoned, Two Mice, Two Tests
11
The completely generalized poisoned-bottle problem
3
Another poisoned bottle question!
7
Bottles of wine, poisoned with time