Solve the clues and fill the grid. Each clue is missing a different European capital city. 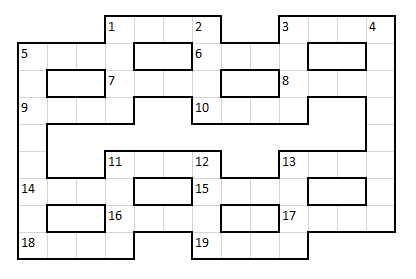 For the purposes of this puzzle I did not include Baku, Nicosia, Tbilisi or Yerevan (all of which could be European depending on which definition one uses).

Insert ATHENS; solution is DECA: AC(ropolis) backwards after DE(laware). I'm not terribly confident about this one.

Insert MOSCOW; solution is DIMA: DUMA with I in place of U

Insert SOFIA; solution is LAIR: IA between L and R

Insert PARIS; solution is SOME: banks of S(ein)E encircle (d)OM(e)

Insert MADRID; solution is AMID: (MADRID-DR)*

Insert PRAGUE; solution is TEEM (apparently "Sparta Prague" is a sporting team; thanks to Fillet for finding this)

Insert COPENHAGEN; solution is MADE: (Little) MERMAID with its second letter moved to the end (MRMAIDE) and letters of RIM removed

Insert BRUSSELS; answer is STRESSED: SS in REED below ST

the solutions, not merely the spaces, are rotationally symmetrical.

I didn't figure out 19a myself and probably never would have; Fillet found it; please consider upvoting their answer if you like this one.

The ?? is to be replaced by a european capital city for each clue

Here are a few:

8a Hideout between left and right, return ??'s finals (4)

Lair (City is Sofia, last two letters backwards between l and r). Nicosia would also have fit if the definition of Europe had included it.

Amid (City is Madrid, anagram without dr)

17a. Constituents of ??'s republic passed with flying colours (4)

Stop (City is Stockholm, giving Sto, then p from punishment)

Teem (City is Prague, Sparta Prague is a team)

1d Created the second-to-last little ?? statue with no rim (4)

Made (City is Copenhagen, statue there is Mermaid (mermaid - rim = mead, move the e from second to last position = made)

4d. ?? couple hides in tube below street under pressure (8)

Stressed? St for street, and a reed? Not sure of the city though?