I love cats! And I love browsing cat pictures! :3

I stumbled on a webpage that shows random cat pictures every time I refresh the page. (For example, this site.) It has a database of $N$ cats and will pick any random picture in probability of $\frac{1}{N}$.

I really enjoyed it. Up to the first $10$ pictures, they are all different cute pictures. However, the $11$-th picture showed the same picture as the $10$-th!

Is the database that small?!

So, what is the expected value of the number of pictures on the database (i.e. $N$)?

Proceeding along the same lines as hexomino, I get a different result. The expectation

The place where I (ha!) diverge from hexomino's answer is

We can try to deal with this inconvenient situation in three ways. First,

we can give up on computing an expectation and compute something else that does make sense for an improper probability distribution. For instance, the mode ("maximum likelihood estimate"). This turns out to be at $N=51$, though the value at $N=52$ is very, very close to being the same.

we can adopt a different "general-purpose" prior. For instance, we might use the "logarithmic prior" where the prior "probability" of $N$ is taken to be $1/N$. (For many cases where a variable is known to take positive values only, this is a reasonable approach, though the usual handwavy arguments for it don't really apply here.) In this case, the posterior probability for $N$ is roughly proportional to $1/N^2$, whose sum is finite, so we do get an actual probability distribution -- but, alas, not one that has an expectation, because the sum we'd need to compute for that diverges again. Still, in this case we can stil compute the mode (as above) and also the median. The mode is at $N=29$ and the median is anywhere between $N=77$ and $N=78$. (The tail of this distribution is rather "fat", which is why the median is so much bigger than the mode. The mean, again, is infinite -- it's more sensitive than the median to that fat tail.)

we can make use of our actual knowledge about cat picture websites and try to come up with a more realistic prior based on that knowledge. There are an awful lot of fairly plausible ways to do this, and unfortunately they will all give different answers. The upside is that if our prior falls off rapidly enough for large $N$ (which it will -- indeed, since presumably only finitely many cat pictures have ever been taken, it is zero for large enough $N$) then everything converges and we can compute expectations to our hearts' content. For instance, suppose we choose a prior that's uniform on $[1,M]$ and zero for $N>M$; then there's a rather ugly explicit-ish formula that for large $M$ is approximately $M/\log M$, but that limit is approached very slowly -- e.g., for $M=10^5$ the expectation is about 14000 while the approximation is about 8700. For any of these distributions with $M\ge51$ the mode ("maximum a posteriori estimate") will still be 51, because this probability distribution is just a rescaled truncation of the improper distribution we got at the outset. Or suppose we (rather arbitrarily) make the prior distribution for $N$ a Poisson distribution of mean $\mu$; then it turns out that for any plausible choice of $\mu$ the expectation comes out rather close to $\mu$ -- there's more information in the prior than in the likelihoods, so to speak.

The upshot of all this is

that I really don't think there's such a thing as a correct answer to the question. As it stands the answer is undefined for two different reasons; we can fix up both of them by specifying a suitable prior, but it turns out that different (but still fairly reasonable) priors can give extremely different answers; and typically the expectation, median and mode come out quite different, indicating that no single figure is going to serve very well to describe our actual beliefs after seeing what we saw.

Credit where due: hexomino did a lot of this before I did (with, unfortunately, an error, but we all make mistakes); all the actual calculations underlying the discussion above were done for me by Mathematica.

in the real world my estimate would probably not be any of the above. I would expect a website offering cat pictures to have rather a lot of them, since the internet is made of cats, and therefore I'd guess that the repetition was most likely the result of some quirk in their software that made the images not be truly selected at random. (E.g., maybe they seed a random number generator with something involving the time, in some broken way that means that two requests exactly a minute apart are likely to produce the same output. Or something.) If I actually cared, I would take a lot more samples before trying to do any calculations.

Edit: As pointed out by Gareth McCaughan, there is a mistake in this answer: $(N-8)$ in the numerator of the normalisation constant should be $(N-10)$ in which case the sum diverges, so this approach will not work.

As Gareth McCaughan pointed out in the comments, I am essentially using Bayesian reasoning with a flat prior. This might not be a sensible choice in the real world as I would expect to have some concept about how many pictures should be in such a database (i.e, 100 would be more likely than say 1000000000), so the answer should be taken with a pinch of salt.

Even with all of the complex mathmatics being done, probability only gives us a way to calculate the answer devoid of other information.

Since you gave an example, but didn't specifically say it WASN'T your example, the most likely hypothesis is that the site you listed as an example was the site you visited.

In math based puzzles, you usually have to go so obscure and hypothetical to make them work, however, in this example it isn't purely hypothetical. The highest probability is that the site you listed IS the one you're referring to, and that site lists exactly how many pictures there are.

Regardless of whether it's true or not, it IS the highest probability, devoid of new information.

For each possible N of cats, let's unleash 10000 users on this website. We will count how many users experiences OP's outcome (10 different cats followed by cat that looks like cat #10)

Now we have a list of probabilities that for Ncats random user will share experience with OP. 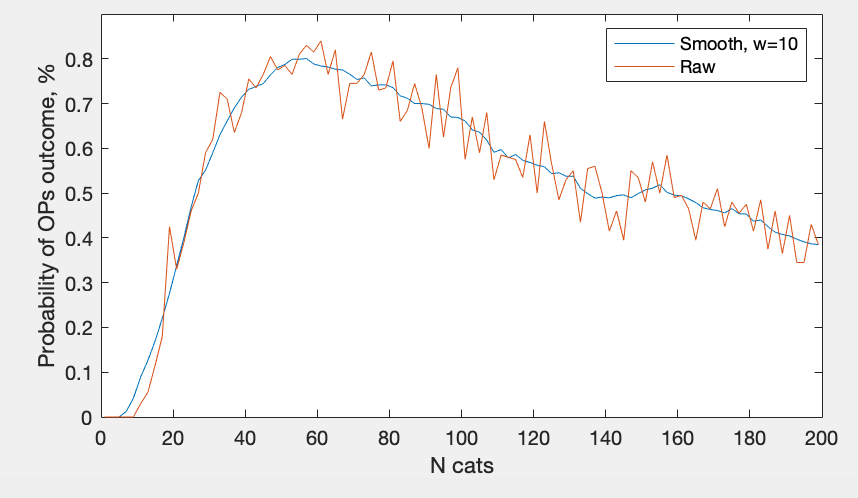 This process takes about 10 seconds on my macbook, and linearly scales with either number of N that we test, or number of users. I have suspicion that it's a smooth curve, so let's try to zoom-in a little bit: 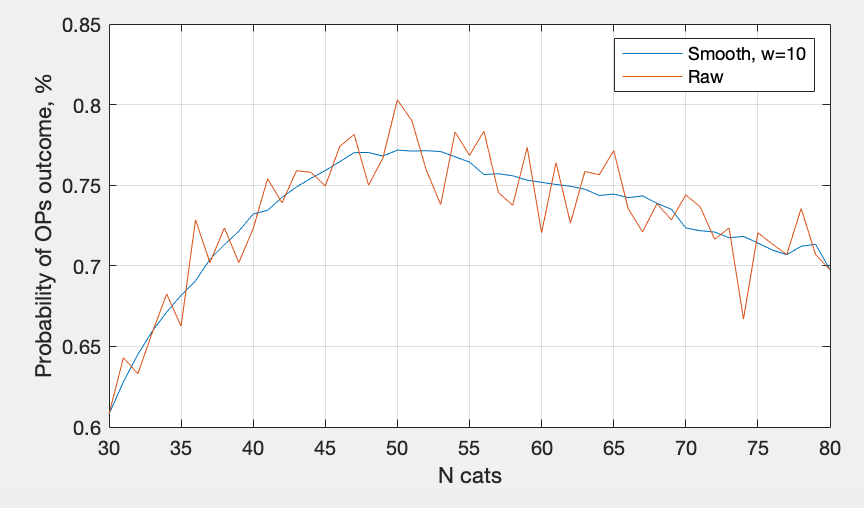 The conclusion is that I need faster computer, but the cat range is probably 45-60.

Rather than working out all the fancy distributions like the other answers. I'd like to define an assumption that:
The case of the Nth image repeating a previous image occurred when there was a >=50% chance of it repeating.

This is then easily calculable as for there to be a 50% chance of it repeating, it needs to have surpassed half of the possible values. Therefore, in this case, the value of N is twice as much as had been before the repeat, which is $10 \cdot 2 = 20$.

As @Bass pointed out, I'm forgetting about the birthday problem here, to generalise for this situation we can use:

Not the answer you're looking for? Browse other questions tagged probability or ask your own question.