Recently in my free time I cut from wood with my scroll saw two pentomino sets. One set made from 10x6 pattern, and then the other set 20x3 pattern. Think of wood cutter difficulties. I would like to post a problem of finding the rectangle solution with the most straight lines.

The solution 20x3 has straight lines of 46 units. The straight line length comes entirely from the rectangle perimeter.

The solution 10x6 has straight lines of 44 units. Here 32 units come from the whole rectangle perimeter and there are 12 bonus units from a straight line cutting the rectangle in two halves (red line in picture). So alternatively we may count perimeters of two smaller rectangles which emerged after red line cut.

I suspect that there might exist a 12x5 solution which may consist of three smaller rectangles. Such solution, if exists, might give us 54 unit of straight lines (34 from perimeter and 10x2 from two internal straight lines).

Is there a solution in which a large rectangle can be composed of three smaller rectangles? Is there any solution which might beat the trivial 20x3 solution? If not, do you have any ideas for solutions maximizing strait line sections. 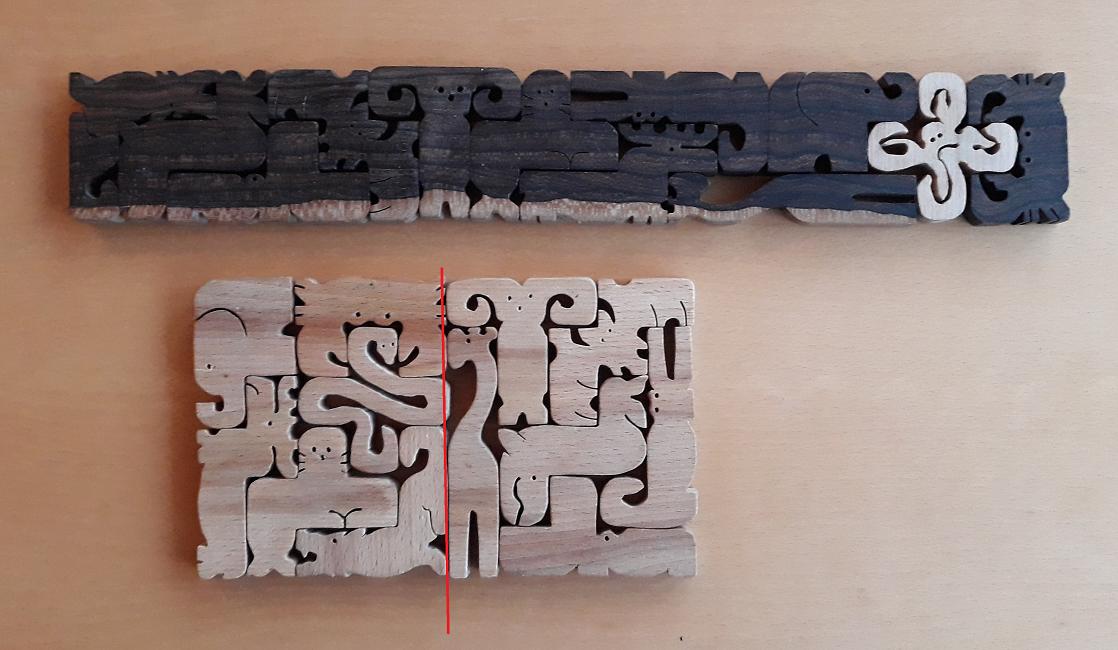 Update after answers.
Being forced to choose one of two excellent answers my choice falls on Daniel Mathias's answer. The answer of Daniel Mathias replies to my original question "is it possible to make rectangle from three smaller rectangles?" and the answer provides useful link to all possibilities.

After it became apparent that the answer is NO, Dr Xorile sank deeper and stated another question "how few straight cuts of any length can be done". I do appreciate it. It was not an easy choice for me and I really wish I could upvote it triple times. Thank you, Dr Xorile.

There are no solutions in three rectangles.

For an index of all pentomino solutions:

@Daniel_Mathias gave a very helpful link which has all the 12x5 solutions in a text file. So some simple code allows us to see that of the 1010 12x5 solutions, there are 264 with 1 straight cut. But, sadly, none with 2 or more cuts. A few examples of the former are:

Edit: Now that I've understood @DanielMathias's point more thoroughly (see discussion under his answer), the question becomes "how few straight cuts of any length can be done". For 12x5, there are 18 with only 31 internal cuts (which is the fewest cuts for any 12x5). Examples include:

If we are just looking to minimize the number of cuts, then we can consider other lengths. I used the 3x20, 4x15, 5x12, and 6x10 solutions from the pentomino website and found that there are 9 solutions that have only 30 cuts. They are:

Not the answer you're looking for? Browse other questions tagged geometry tiling polyomino or ask your own question.