Creating a maze that is traversed by a pair of compasses

Normal mazes require you to move a point-like object from the entrance of the maze to the exit.
I am wondering whether a different kind of maze would work as a puzzle:

Imagine a maze printed on a piece of paper, and a pair of compasses, which touches the paper in two points: 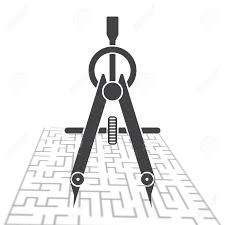 With these rules, can you create a nontrivial maze with two entrances and two exits?
The two points should have to travel along different paths, not simply behind each other on the same path.

I could not find any further information about this type of maze. Is there a name for it, and are there existing examples? Perhaps even an algorithm to create such mazes?

I think this is a clever and likely original idea. I have not seen a similar idea before (though I haven't seen everyithing). However, I do have an idea to improve it a little bit.

From your description, it sounds like one could simplify the problem by saying that there are two mazes, each solved in the normal way, but when drawing the solution, the two pens/pencils/markers must stay the exact same distance from each other.

In its base form, I think that this would result in a fairly simple puzzle, perhaps even simpler than a standard maze. I say this because you would have a very limited amount of options for available paths - the mazes are necessarily narrow so that the don't interfere with each other.

My proposed solution to this is to make two "layered" mazes - one on top of the other, both of which have multiple correct solutions on its own, but the aforementioned conditions make there only one solution. You could simulate this "layered" system by drawing the two mazes on the same sheet of paper and labeling them with the same coordinate system. Then set the available "radius" to, say, five, so that if you're at (7, 6) in one maze, you need to be on the circle $(x-7)^2 + (y-6)^2 = 25$ in the other maze, and vice-versa.

Good luck in your puzzle creation!

I would suggest making the maze(s) circular, actually (as opposed to rectilinear), since that would theoretically add a layer of difficulty in that the relative radii of paths could change slightly. Otherwise, as Brandon has pointed out, I don’t think it would be as difficult as you might think.

Of course, I might be overlooking something as well. It’s definitely an interesting concept.

One idea you might try is to create a normal maze and 'split' it by creating two copies, and removing some walls from one copy and some from the other, and do the opposite with some gaps. There must only ever be one solution, and all rooms must be accessible.

It is easy to solve because you can simply superimpose the two images, but might prove to be more fun (you have to solve the two mazes simultaneously).

Here is the original maze:

Not the answer you're looking for? Browse other questions tagged puzzle-creation mazes algorithm or ask your own question.

20
Maze Solving Robot
1
Computer-controlled maze
72
Alice and the Fractal Hedge Maze
35
A blue, white and red maze
21
Help me to find a small but hard and clever maze
7
Generating a maze with multiple sets of entries and exits, and multiple “floor” types
11
Oriental House: An original grid-deduction challenge
7
Create a changeable maze
5
Longest path in a rotating maze
14
A mouse and a maze on a n x n grid