Knights and Knaves : Liar , Liar - How many are you?

For a group of $2n$ $(n\geq1)$ knights and knaves satisfying the puzzle conditions, there must be exactly $n$ knaves. Moreover, all knaves must occupy the first $n$ positions in the row (left to right direction)

We can provide a very elegant proof of this fact by considering this situation if there were $2n$ people in a row. Clearly, for $n\geq 1$, there is at least one knight and one liar, as otherwise the situation would obviously be untrue. From this, consider the leftmost person - there are no liars to his left (which is obviously not more than the number of knights to his right). Thus, he is a liar. The rightmost person obviously has no knights to his right and at least that liar to the left - so he must be a knight.

How do we use this? Take the original $2014$ people. The leftmost is a liar, the rightmost is a knight. If we exclude these two people, we don't modify the situation - we've removed a liar from the left and a knight from the right, so everyone's counts on both sides decrease by one. Thus, we have the $2012$ people in the middle remaining - and the leftmost must be a liar and the rightmost is a knight. Remove them. There are now $2010$ people left. We continue in this manner, pairing liars and knights and, at the end, we have proven that the 1007 leftmost people were liars and the 1007 rightmost were knights.

We can generalize this answer to handle the case where there are $n$ people and we ask everyone in the line whether there there are more knaves to their left than knights to the right and receive a "yes" or "no" answer from each person. In particular, let's consider cases:

Therefore, every case can be reduced to a smaller case and we can thusly identify everyone.

There are 1007 liars followed by 1007 knights. Each liar has 1007 knights to their right and at most 1006 liars to their left, while the knights are in the opposite situation.

One doesn't need maths to solve this, all you need is logic, imagination and intuition maybe:] It's easier to start from knights, because their statement is true, so we divide 2014 in two, here is a visual: 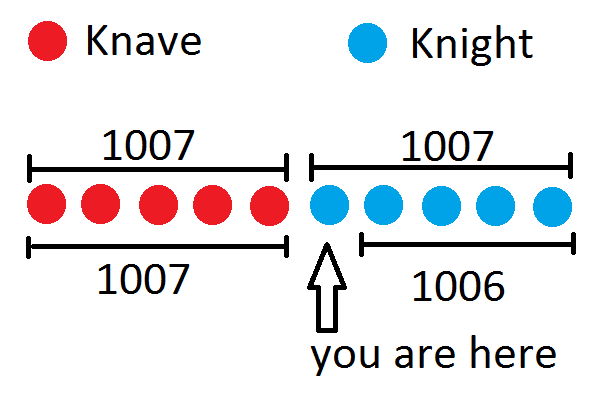 So, the place marked as "Your are here" is the last position for the knight where his statement is true, and at this point we have 1007 knaves to the left. So the answer is:

At any person in the row, the knaves on the left should be > than knights on the right.